253 Mathilde is a main belt asteroid with a relatively small perihelion (1.94 AU)

Mathilde was discovered in 1885 by Johann Palisa. The name is thought to honor the wife of astronomer Moritz Loewy, then the vice director of the Paris Observatory.

The spacecraft NEAR made a flyby of Mathilde on 27 June 1997; NEAR’s main mission to orbit the asteroid 433 Eros.

The most of the asteroids that have so far been encountered by spacecraft such as 433 Eros, 243 Ida and Gaspra are S-type asteroids; Mathilde is our first look at a C-type. C-type asteroids are believed to be the source of carbonaceous chondrite meteorites.

Mathilde has at least 5 craters larger than 20 kilometers in diameter (and we only got to see a little more than half its surface). Ida and Gaspra do not have such large craters. It is not clear how such large craters can be produced on such a small body.

Mathilde’s density is only 1.4 gm/cm^3. It is probably very porous, somewhat like styrofoam. This may help account for the large craters.

It’s albedo is only 4%. Furthermore, its surface color is very uniform despite the deep craters. This indicates that its interior is homogeneous, perhaps a pristine sample of the early solar system.

Another oddity is that Mathilde’s rotation rate is very slow, 17.4 days. Perhaps this is somehow due to the many large impacts it obviously suffered. 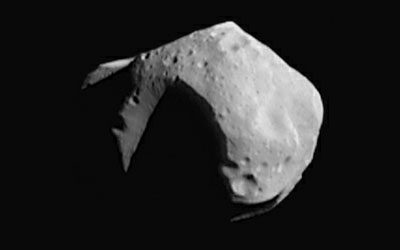