951 Gaspra orbits the Sun near the inner edge of the main asteroid belt between Mars and Jupiter.

Gaspra was named by its discoverer Neujmin for a resort on the Crimean peninsula. Consequently, many of the asteroid’s craters have been named for resorts and spas worldwide.

Like 243 Ida, Gaspra is an S-type asteroid, believed to be composed of a mixture of rocky and metallic minerals.

The first of the handfull of asteroids that have so far been observed close-up, Gaspra was encountered Oct 29, 1991 by the Galileo spacecraft on its way to Jupiter (Galileo later visited 243 Ida and NEAR visited 253 Mathilda and 433 Eros).

Gaspra is a member of the Flora family of asteroids.

Gaspra’s surface is covered with impact craters. From the number of small craters on its surface, we can estimate that Gaspra is about 200 million years old. 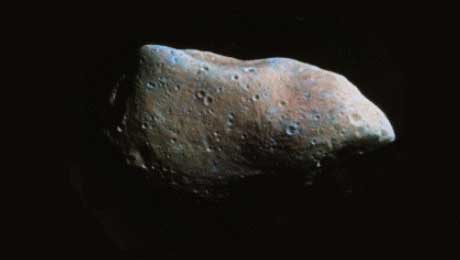