The Andromeda Galaxy is an elliptic galaxy and the largest one in our Local Group. It is more than double the size of the second largest, our home – the Milky Way.

Looking for fun activities to teach kids about Andromeda Galaxy?

This premium worksheet bundle contains a printable fact file and 10 fun and engaging worksheets to challenge your students and help them learn about Andromeda Galaxy. 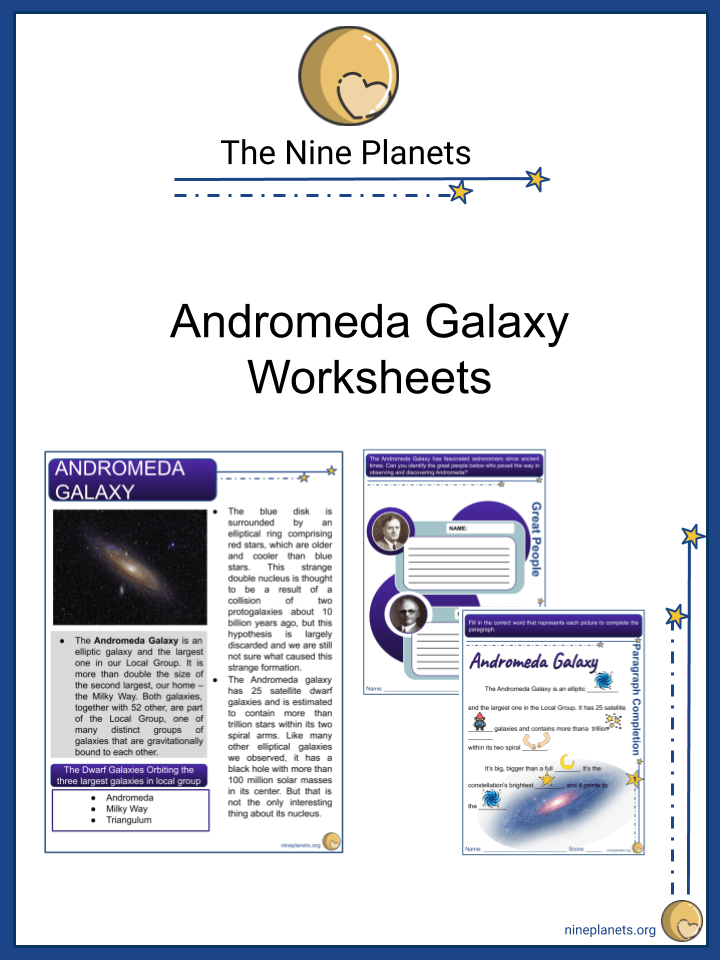 The Andromeda Galaxy is an elliptic galaxy and the largest one in our Local Group. It is more than double the size of the second largest, our home – the Milky Way. Both galaxies, together with 52 other, are part of the Local Group, one of many distinct groups of galaxies that are gravitationally bound to each other. The majority of the galaxies in the Local Group are dwarf galaxies orbiting the three largest –Andromeda, Milky Way and Triangulum. The Andromeda galaxy has 25 satellite dwarf galaxies and is estimated to contain more than trillion stars within its two spiral arms.

Like many other elliptical galaxies we observed, it has a black hole with more than 100 million solar masses in its center. But that is not the only interesting thing about its nucleus. The observations made by the Hubble Space Telescope revealed blue light surrounding the black hole. The source of the blue light was unlike anything we observed before. There appeared to be around 400 stars arranged in a disk with a diameter of only one light year. The blue disk is surrounded by an elliptical ring comprised of red stars, which are older and cooler than blue stars. This strange double nucleus is thought to be a result of a collision of two protogalaxies about 10 billion years ago, but this hypothesis is largely discarded and we are still not sure what caused this strange formation.

Even though there is a huge distance between the Earth and the Andromeda, it can still be seen in the night sky with the naked eye. The light from the faint smudge that can be seen on a clear moonless night takes whooping two and a half million years to reach the Earth.

How to find it in the night sky

In areas without much light pollution, the Andromeda galaxy can be seen as a small fuzzy smudge just beneath the central bulge of the Milky Way. It is located in the constellation Andromeda, between the W-shaped constellation Cassiopeia and the Great Square of the Pegasus constellation. It is best observed during the autumn and winter in the northern hemisphere and during the spring in the southern hemisphere. At mid-northern latitudes it can be found between October and December in zenith – the highest point above our heads.

History of the Andromeda Galaxy

The Andromeda has fascinated astronomers since the ancient times. Some of the oldest records date all the way back to the 10th century. Up until the early 1900’s, it was believed that the Andromeda was a nebula within the Milky Way galaxy. In fact, it was generally believed that all of the universe was contained within our galaxy. There were, however, speculations about the existence of extragalactic objects as early as 17th century, most notably by a French mathematician Pierre Louis Maupertuis. He envisioned this beautiful and somewhat accurate notion of “island universes” with their own stars, planets and other celestial bodies. He was later quoted by the well-known German philosopher Immanuel Kant in his work Universal Natural History and Theory of the Heavens.

The first photograph of the Andromeda was taken in 1855, but it did not reveal enough details and it was still believed it was a nebular object. The astronomer Heber Doust Curtis noticed a supernova within the Andromeda galaxy in 1917, which prompted him to check earlier records. He found 11 instances of novae that were 10 times dimmer than other novae we observed in other parts of the sky. Based on the “island universe theory, he calculated the distance to be around 500 000 light years away. The existence of other galaxies and extragalactic object outside the Milky Way once again became a subject of a great debate, known as – the Great Debate.

The first concrete evidence of these hypotheses appeared in 1923, when the brilliant astronomer Edwin Hubble observed a Cepheid variable star within the Andromeda galaxy, a type of pulsating stars known as “standard candles” which are used to calculate the distance between celestial objects. The pulsation of this particular type of star depends on the energy that they emit. By knowing the pulsation rate of a star and using some complex math, we can calculate its intrinsic luminosity of that star and its distance from the Earth. Edwin Hubble did just that, calculating the distance to astonishing 2.5 million light years, thus proving the existence of other galaxies, or “island universes” in the Cosmos.

With the technological advancements over time, we were able to calculate something called transverse velocity, which indicates a colossal smash with our own galaxy in about 4 billion years. A team of researchers at the Space Telescope Science Institute were able to create a computer simulation depicting the process and the result of this collision. The results of these simulations were similar to those we observed in other galactic collisions, e.g. Antennae. Less than a 100 years after we proved it was, in fact, a galaxy, we were able to identify an exoplanet in the Andromeda galaxy.

There is still an ongoing debate around the Andromeda’s mass. Given the diameter which is more than twice as long as in the Milky Way, we have thought it was at least twice as massive as our galaxy. But in 2018, a group of researchers from Australia concluded that it might be as massive as the Milky Way, despite its size and number of stars.

In 1999 we observed a microlensing event, a type of cosmic event where excessive gravity bends the light and magnifies it to reveal otherwise obscure details. This allowed us to detect the first exoplanet in a distant galaxy that is approximately 6.34 times larger than our gas giant Jupiter.

The future of the Andromeda Galaxy

Unlike other galaxies in our cosmic neighborhood that move away from us at an increasing rate due to the cosmic expansion, the Andromeda is set to collide with the Milky Way in about 4.5 billion years. It’s racing towards the Milky Way at the speed of 110 km/s. This monumental collision will most likely result in a bigger spiral galaxy some 6 billion years from now. The two supermassive black holes at the center of each galaxy will fall towards the center of the newly formed galaxy and merge to possibly produce a powerful quasar that shoots high-energy particles perpendicular to the plane of the galaxy. The shock wave of the two black holes merging might cause an increase in new star formation.

Whether the Solar system will survive this violent head-on collision is hard to calculate and predict. With the average distance between stars being 100 billion times larger than the average size of a star, there might be some gravitational disruptions between the stars within the two galaxies, but direct collisions are unlikely. This means that our Sun will probably survive the collision. However, by that time, the Earth will be long gone, as it will likely be swallowed by the Sun as it burns through the fuel needed for fusion and becomes a red giant some 2.5 billion year from now.