In 1705 Edmond Halley predicted, using Newton’s newly formulated laws of motion, that the comet seen in 1531, 1607, and 1682 would return in 1758 (which was, alas, after his death). The comet did indeed return as predicted and was later named in his honor.

The average period of Halley’s orbit is 76 years but you cannot calculate the dates of its reappearances by simply subtracting multiples of 76 years from 1986. The gravitational pull of the major planets alters the orbital period from revolution to revolution. Nongravitational effects (such as the reaction from gasses boiled off during its passage near the Sun) also play an important, but smaller, role in altering the orbit. Between the years 239 BC and 1986 AD the orbital period has varied from 76.0 years (in 1986) to 79.3 years (in 451 and 1066). The closest perihelion passage to the time of Jesus are 11 BC and 66 AD; neither event took place in Jesus’ lifetime. Its most famous appearance was in 1066 when it was seen at the Battle of Hastings, an event commemorated in the Bayeux Tapestry.

Halley’s orbit is retrograde and inclined 18 degrees to the ecliptic. And, like all comets, highly eccentric.

Only four comets have been visited by spacecraft. NASA’s ICE passed through the tail of Comet Giacobini-Zinner in 1985; Comet Grigg Skjellerup was visited by Giotto in 1989. In 1986, five spacecraft from the USSR, Japan, and the European Community visited Comet Halley; ESA’s Giotto obtained close-up photos of Halley’s nucleus (above and right). NASA’s technology demonstration spacecraft DS1 imaged the nucleus of Comet Borrelly in 2001.

The nucleus of Comet Halley is approximately 16x8x8 kilometers.

Contrary to prior expectations, Halley’s nucleus is very dark: its albedo is only about 0.03 making it darker than coal and one of the darkest objects in the solar system.

The density of Halley’s nucleus is very low: about 0.1 gm/cm3 indicating that it is probably porous, perhaps because it is largely dust remaining after the ices have sublimed away.

Halley is almost unique among comets in that it is both large and active and has a well defined, regular orbit. This made it a relatively easy target for Giotto et al. but may not be representative of comets in general.

Comet Halley will return to the inner solar system in the year 2061. 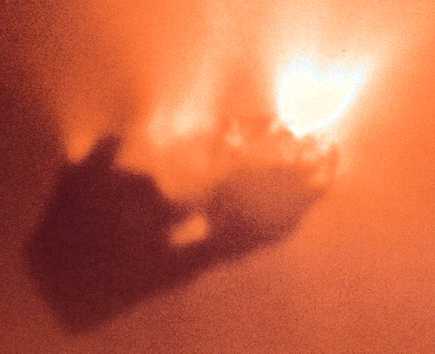