Deimos (“DEE mos”) is the smaller and outermost of Mars’ two moons. It is one of the smallest known moons in the solar system.

How was Deimos discovered?

On August 12th 1877 due to the focused search of Martian moons by Asaph Hall resulted in the discovery of Deimos in the United States Naval Observatory in Washington DC.

The astronomer used a 26-inch refractor to study the region around Mars. Studying closer to the Red Planet than any another scientist, he found the small moons orbiting the planet’s equator. Six days after finding Deimos Asaph Hall also discovered Phobos.

Related: – Why is Mars red?

How did Deimos get its name?

Just like many planets and moons in our Solar System, the small satellite gets its name from Greek mythology. The moon is named after Deimos, the god of terror in Homer’s ancient poem, “The Iliad”. One of the twin sons of Mars (Ares is the equivalent Greek God) and would follow his father into battle.

In Greek mythology, Deimos is one of the sons of Ares (Mars) and Aphrodite (Venus); “deimos” is Greek for “panic”.

Deimos and Phobos are composed of carbon-rich rock like C-type asteroids and ice. Both are heavily cratered.

Deimos and Phobos are probably asteroids perturbed by Jupiter into orbits that allowed them to be captured by Mars. 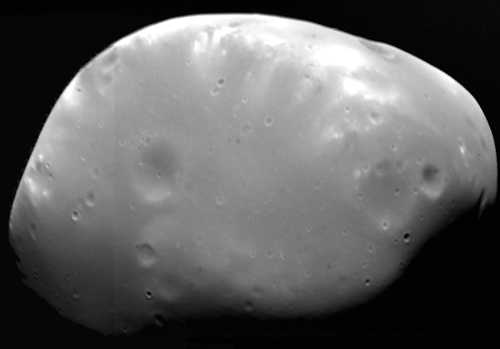