In Greek mythology Dione was the mother of Aphrodite (Venus) by Zeus (Jupiter).

Discovered by Cassini in 1684.

Dione is the densest of Saturn’s moons (aside from Titan, whose density is increased by gravitational compression). It is composed primarily of water ice but must have a considerable fraction of denser material like silicate rock.

Though somewhat smaller, Dione is otherwise very similar to Rhea. They both have similar compositions, albedo features and varied terrain. Both rotate synchronously and have dissimilar leading and trailing hemispheres.

On the trailing hemisphere there is a network of bright streaks on a dark background and few visible craters (left). The streaks overlay the craters, indicating that they are newer.

The leading hemisphere is heavily cratered and uniformly bright (right). Like Callisto, the craters lack the high relief features seen on the Moon and Mercury.

This was interpreted as follows: shortly after its formation Dione was active. Some processes (ice volcanism?) resurfaced much of Dione leaving the pattern of streaks, probably on the whole surface. Later, after the internal activity and resurfacing ceased, a much less intense series of impacts (which left craters too small to be seen in Voyager’s images) occurred. This was concentrated on the leading hemisphere and wiped out the streak patterns but left them intact on the trailing hemisphere.

And as is often the case in science and to the delight of all involved, newer data shows that the previous hypothesis was wrong. Higher resolution images from Cassini clearly show that the streaks are not ice flows but rather a complex network tectonic fractures that are younger than most of the craters (click the image to the left).

Helene is the thirteenth of Saturn’s known satellites:

Helene is the name of an Amazon who battled with Achilles.

Discovered by Laques and Lecacheux in 1980 from ground-based observations.

Helene is in Dione’s leading Lagrange point and hence was sometimes referred to as “Dione B”. 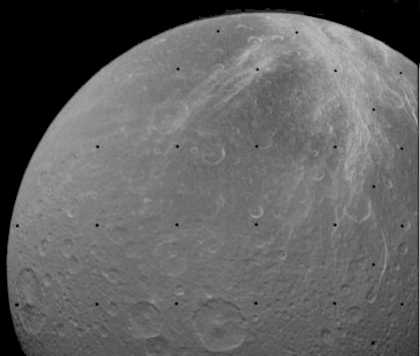