Epimetheus ( “ep eh MEE thee us” ) is the fifth of Saturn’s known satellites:

Epimetheus was the son of Iapetus and brother of Prometheus and Atlas; husband of Pandora. “Epimetheus” is Greek for “hindsight”.

Epimetheus was first observed by Walker in 1966. But the situation was confused since Janus is in a very similar orbit. So Walker officially shares the discovery of Epimetheus with Fountain and Larson who showed in 1977 that there were two satellites involved. The situation was clarified in 1980 by Voyager 1.

The dark line across the surface in the Voyager image to the left is actually the shadow of the Saturn’s F-ring.

Epimetheus and Janus are “co-orbital”.

There are several craters larger than 30 km in diameter as well as both large and small ridges and grooves. The extensive cratering indicates that Epimetheus must be quite old. 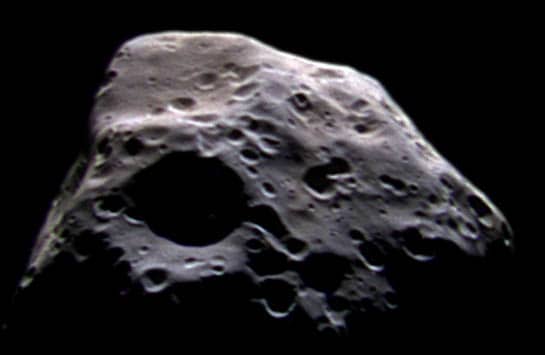