Ganymede (“GAN uh meed”) is the seventh and largest of Jupiter’s known satellites. Ganymede is the third of the Galilean moons.

How was Ganymede discovered?

Galileo Galilei discovered Ganymede on January 7th, 1610. The discovery was made with three other moons, Io, Europa and Callisto. These four moons are known as the Galilean Moons.

It was this discovery by Galileo that led to our understanding that planets revolve around the Sun.

How did Ganymede get its name?

Galileo first named the moon Jupiter III. However, the numerical system of the naming of planets and satellites was abandoned in the mid-1800s in favour of ancient gods. The moon was named after a Trojan prince in Greek mythology called Ganymede, who was turned into an eagle by Zeus and made the official cupbearer of the Greek Gods.

Ganymede is the only Galilean moon named after a male character.

Related: – Which planet has the most moons?

Ganymede was a Trojan boy of great beauty whom Zeus carried away to be cup bearer to the gods.

Ganymede is the largest satellite in the solar system. It is larger in diameter than Mercury but only about half its mass. Ganymede is much larger than Pluto.

Before the Galileo encounters with Ganymede it was thought that Ganymede and Callisto were composed of a rocky core surrounded by a large mantle of water or water ice with an ice surface (and that Titan and Triton were similar). Preliminary indications from the Galileo data now suggest that Callisto has a uniform composition while Ganymede is differentiated into a three layer structure: a small molten iron or iron/sulfur core surrounded by a rocky silicate mantle with a icy shell on top. In fact, Ganymede may be similar to Io with an additional outer layer of ice.

Ganymede’s surface is a roughly equal mix of two types of terrain: very old, highly cratered dark regions (left), and somewhat younger (but still ancient) lighter regions marked with an extensive array of grooves and ridges (right). Their origin is clearly of a tectonic nature, but the details are unknown. In this respect, Ganymede may be more similar to the Earth than either Venus or Mars (though there is no evidence of recent tectonic activity).

Evidence for a tenuous oxygen atmosphere on Ganymede, very similar to the one found on Europa, has been found recently by HST (note that this is definitely NOT evidence of life).

Similar ridge and groove terrain is seen on Enceladus, Miranda and Ariel. The dark regions are similar to the surface of Callisto.

Extensive cratering is seen on both types of terrain. The density of cratering indicates an age of 3 to 3.5 billion years, similar to the Moon. Craters both overlay and are cross cut by the groove systems indicating that the grooves are quite ancient, too. Relatively young craters with rays of ejecta are also visible (left).

Unlike the Moon, however, the craters are quite flat, lacking the ring mountains and central depressions common to craters on the Moon and Mercury. This is probably due to the relatively weak nature of Ganymede’s icy crust which can flow over geologic time and thereby soften the relief. Ancient craters whose relief has disappeared leaving only a “ghost” of a crater are known as palimpsests (right).

Galileo’s first flyby of Ganymede discovered that Ganymede has its own magnetosphere field embedded inside Jupiter’s huge one. This is probably generated in a similar fashion to the Earth’s: as a result of motion of conducting material in the interior. 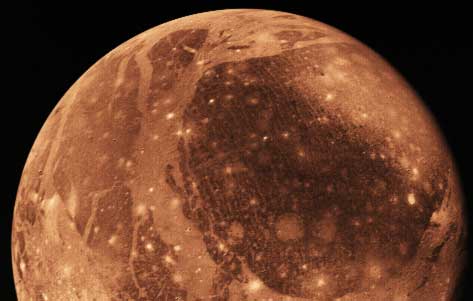