Asteroids are small, rocky, debris left over from the formation of our solar system around 4.6 billion years ago. There are currently over 822,000 known asteroids.

Looking for fun activities to teach kids about the planet Asteroids?

This premium worksheet bundle contains a printable fact file and 10 fun and engaging worksheets to challenge your students and help them learn about Asteroids. 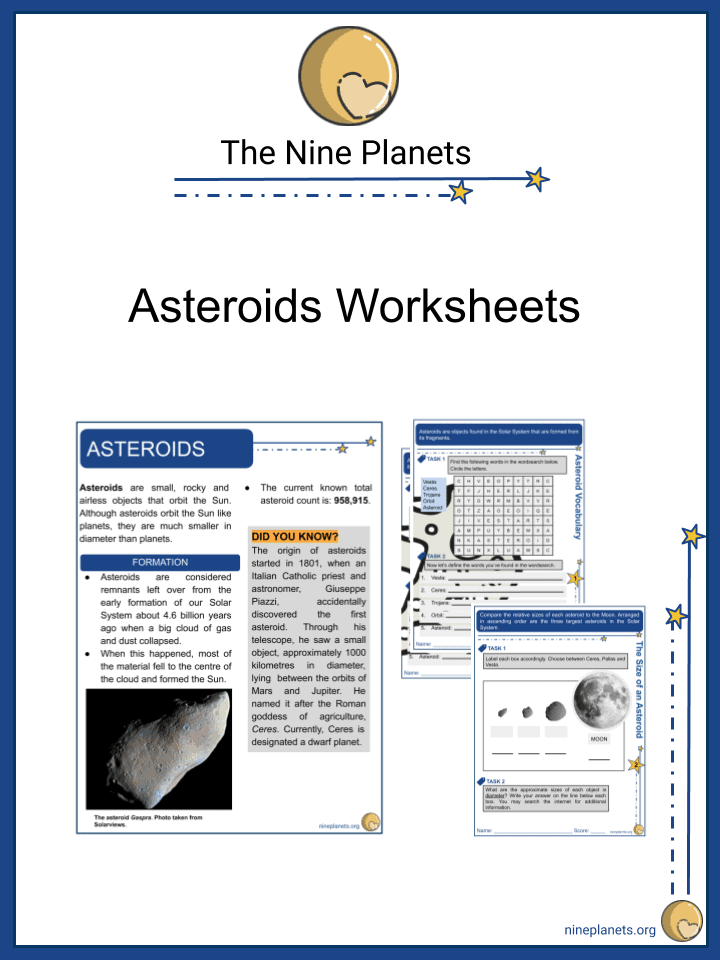 Asteroids are small rocky objects that orbit the Sun. Though they orbit the Sun just like planets, they are very small in comparison, and sometimes they are referred to as minor planets.

In the 18th century, a German astronomer by the name of Johann Titius was convinced that there was a planet between Mars and Jupiter.

His belief quickly captured the interest of other astronomers and they all started to search for this missing planet in 1800. Later, an Italian astronomer, Giuseppe Piazzi discovered Ceres, and then Pallas.

Everyone was very enthusiastic and they started searching for more and more. As they continued their hunt for planets, they discovered innumerable objects, some small, some big, and they realized that these weren’t planets. Since then, everyone started to refer to the little objects, as asteroids.

When the Solar System was young, dust and rock were pulled together by gravity giving birth to the planets. Some debris was left alone to float around the Sun.

The region between Mars and Jupiter later became what we today now know as the asteroid belt. Some believe that these asteroids are actually the remnants of a destroyed planet.

However, scientists have calculated the entire mass of these asteroids, and it is less than that of our Moon, which is very small compared to a planet. Because of this, many believe that the asteroids are simply objects kept in place, stopped from blending with other planets due to gravitational interactions with the planet Jupiter.

There are many different kinds of asteroids. Asteroids are classified by how much light they reflect and their chemical composition. Here are some examples:

These asteroids make up for around 75% of the asteroid belt. The initial C stands for carbon. C-type asteroids have dark surfaces, almost coal-black in appearance

These asteroids make up around 17% of the asteroid belt. They are located mostly in the inner asteroid belt, and their numbers dwindle farther out. The initial S stands for silicaceous. They are bright asteroids composed of metallic nickel-iron mixed with magnesium-silicates.

These asteroids are the rarest in the Solar System. The initial M stands for metallic. They are relatively bright and they are mostly composed out of pure nickel-iron. Most of them reside in the middle of the asteroid belt.

No two asteroids are alike! This is because they formed in different locations at different distances from the Sun. Asteroids aren’t all round like planets. They have jagged and irregular shapes, often resembling a potato.

While some asteroids are hundreds of miles in diameter, others are as small as pebbles. In fact, the vast majority of asteroids are very very small.

There are around 16 detected asteroids with diameters greater than 150 mi / 240 km. Some of the largest asteroids are Ceres, Pallas, Vesta, Hygiea.

Due to its size and composition, Ceres is also considered a dwarf planet. It may contain water and who knows, maybe even life!

This is where most of the asteroids reside, between Mars and Jupiter. The asteroids here are made out of rock, stone, iron, nickel metals, and carbon-rich materials.

The asteroids that are the farthest away from the belt have even ice or water. Many asteroids here are sometimes referred to as planetoids, this where the dwarf planet Ceres resides.

Though in many movies asteroids are depicted as being very close to each other and very dangerous for ships, it is actually quite the opposite.

The average distance between asteroids in the belt is usually at around 600,000 mi / 1 million km. A spacecraft can safely travel there and explore.

The Asteroid Belt in the Future

The asteroids belt has existed for billions of years and it will continue to exist for just a couple of millions of years. This is because our Sun will near the end of its life in around 5 to 6 million years.

When this will happen, the Sun’s light will shatter the asteroid belt. This powerful “last light” of the Sun will radiate and warm up the asteroids, destroying them.