Black holes are objects of both great mass, density and are found throughout the Universe. Keep reading for more interesting facts perfect for kids.

Black holes are a space where a significant amount of matter is packed into a tiny area. This results in a powerful gravitational field, where not even light can escape from.

Albert Einstein predicted the existence of the mysterious celestial objects known as black holes in 1916 due to his general theory of relativity. However, for decades black holes were thought of as just theoretical objects until 1971 when Cygnus X-1 was discovered. 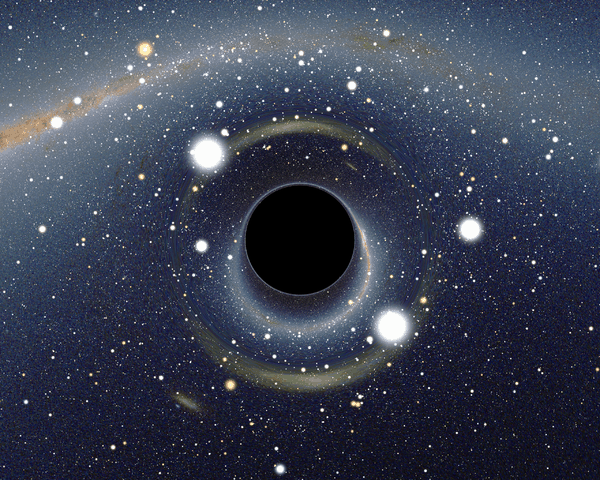 Cygnus, though, was not officially recognized as a black hole until much later. The physicists Stephen Hawking and Kip Thorne disagreed with one another about Cygnus until 1990, when Hawking finally conceded.

Even though black holes were proved to exist, another problem perturbed the scientific community. How do black holes look like? This was solved quite recently in 2019.

An extraordinary effort conducted by the international Event Horizon Telescope consortium succeeded in this task and revealed a black hole shadow's first images. 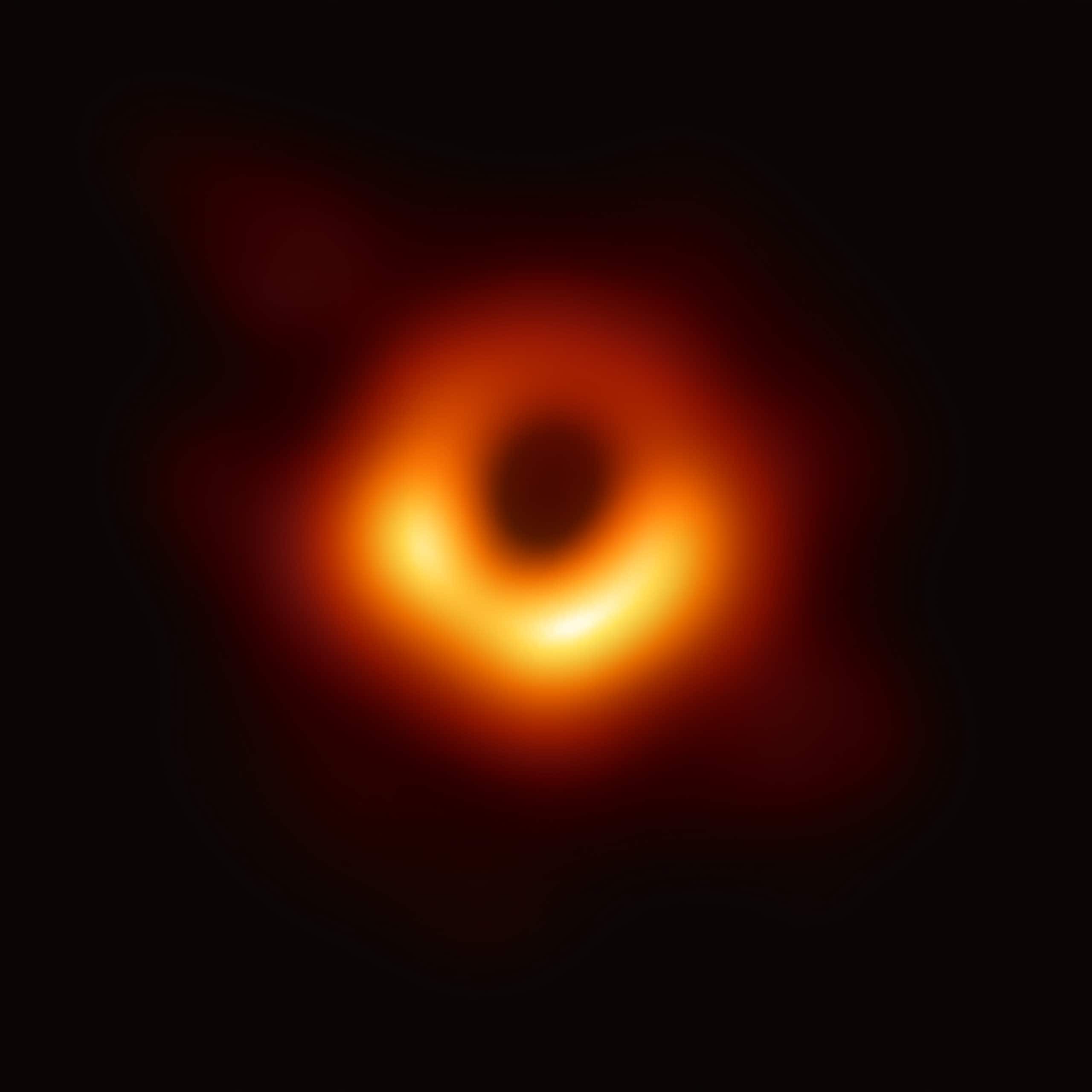 Researchers practically created a virtual telescope the size of Earth by linking radio dishes from across the globe. Thus the first picture of a black hole was made, and interestingly enough, it indeed looks very similar to all our previous simulations of how it would look like. The captured object is a supermassive black hole located in the center of the Messier 87 galaxy.

How do black holes form? Though we have made significant breakthroughs regarding black holes, much more information concerning them is still shrouded in mystery. Typically, black holes form when stars collapse and die. 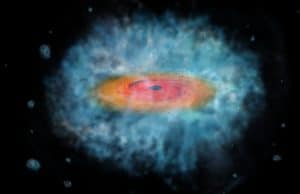 Stars are massive collections of hydrogen atoms that collapsed from gas clouds under their own gravity. The core is responsible for nuclear fusion, which crushes hydrogen atoms into helium, releasing incredible energy amounts.

This energy isn't what we are used to, but rather, it comes in the form of radiation, and it pushes against gravity; however, a delicate mutual balance is present. The fusion in the core is the key to this stability. Stars that have more mass than our Sun fuse heavier elements until they reach iron.

The fusion process, which ultimately creates iron, doesn't generate energy as the other elements do. Thus iron begins to build up in the center and reaches a critical amount. The balance between radiation/energy and gravity is broken, and the core implodes.

The star collapses, moving at a quarter of the speed of light as it continues to feed even more mass to its core. All the heavier elements known to us in the Universe are created as the star dies in a supernova explosion. 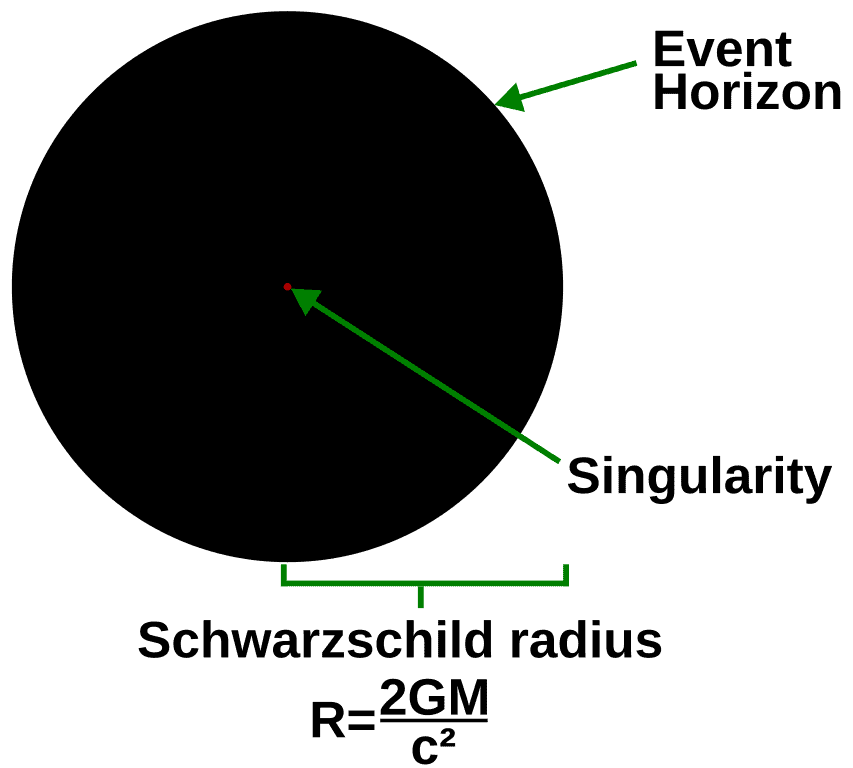 The end result is either a neutron star or if the star was massive enough, a black hole. This happens if a star is usually three times more massive than our Sun. Theoretically, anything compressed sufficiently can form a black hole.

The requirement is that the physical size must be less than a Schwarzschild radius. Our Sun, for example, would become a black hole if its mass was contained within a sphere around 2.5 km / 1.5 mi across.

Black holes shrink/evaporate through a process called Hawking radiation. Space is filled with virtual particles that come into existence and annihilate each other again. On the edge of a black hole, one particle will be drawn into it while the other escapes and becomes a real particle.

Thus, the black hole is losing energy. It happens very slowly, but this process is accelerated as the black hole becomes smaller. When a black hole reaches the size of an asteroid, it radiates at room temperature.

At the size of a mountain, it radiates around the same heat as the Sun, and in the last second of its life, it will emit the energy of billions of nuclear bombs in a massive explosion.

The most giant black holes currently known to humanity might take up around a googol year (a number with a hundred digits) before this happens and the black hole evaporates.

The size of a black hole is determined by the mass contained within. As it grows in mass, its radius also increases, causing its spherical volume to increase and its density to decrease. Black holes continue to grow by absorbing other matter.

Black holes vary in size and other characteristics. There are four currently known types of black holes:

1.  Stellar Black Holes – They form through the gravitational collapse of a star. Their masses range from 5 to several tens of solar masses. Cygnus X-1 is a stellar black hole with a mass around 14.8 times that of our Sun. 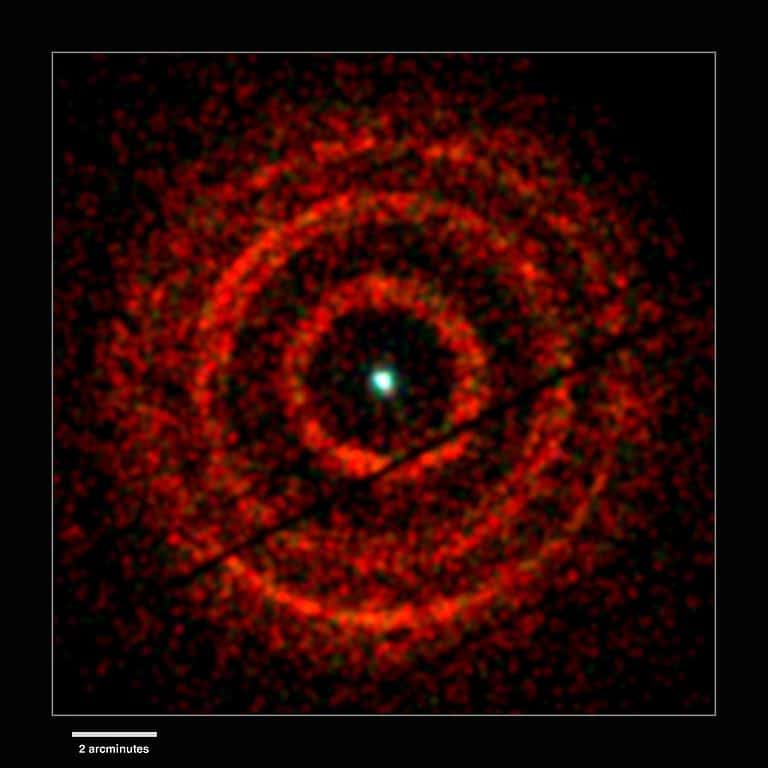 2.  Intermediate Black Holes – There are three theories of how these objects form. The first one states that stellar black holes and other compact objects merge by means of accretion.

The second one states that a runaway collision of massive stars in dense stellar clusters and the collision product collapse into an IMBH. The third scenario states that IMBH's are primordial black holes formed in the Big Bang. These mid-sized black holes range from 100 to one million solar masses. 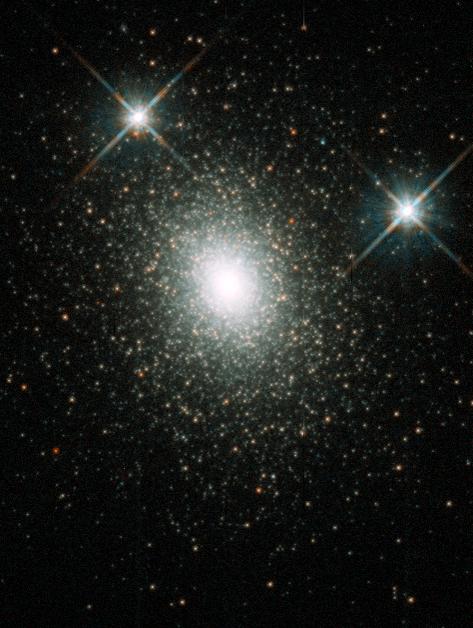 3.  Supermassive Black Holes – The largest category of black holes. Their exact formation is still debated among the scientific community. Some state that they form near the center of a galaxy since they are usually found there. In this location, they grow by accretion of matter and by merging with other black holes. Galaxies that have connected with one another also may contribute to their size. 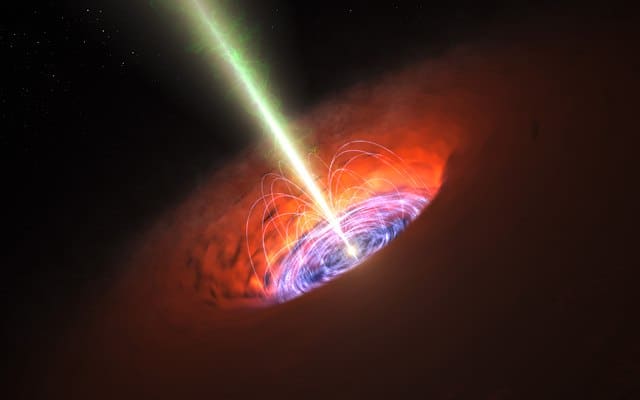 4.  Miniature Black Holes – The most mysterious black holes are the MBH. They are so small they shouldn't exist. Their formation occurred most likely in the early age of the Universe. 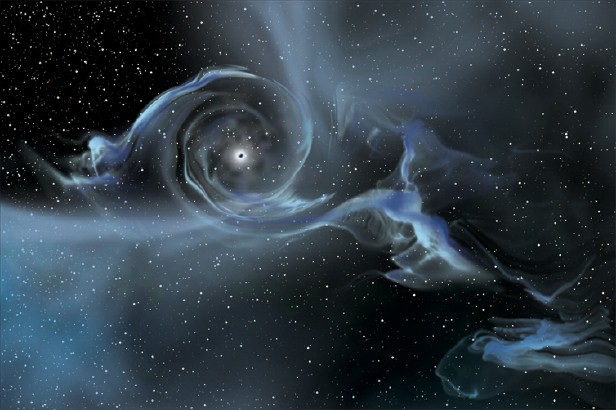 Black holes are tough to spot since they reflect no light. However, their interaction with matter gives away their location. Currently, at least ten million stellar black holes are predicted to exist in the Milky Way alone.

When it comes to supermassive black holes, some galaxies, such as 4C +37.11, appears to have 2 of them as they form a binary system. It is not known how small or large a black hole can be.

The smallest currently discovered has around 3.3 solar masses, while one of the most gigantic ones has been found in the Abell 85 galaxy cluster. It's approximately 40 billion times the Sun's mass or roughly two-thirds the mass of all the stars in the Milky Way. 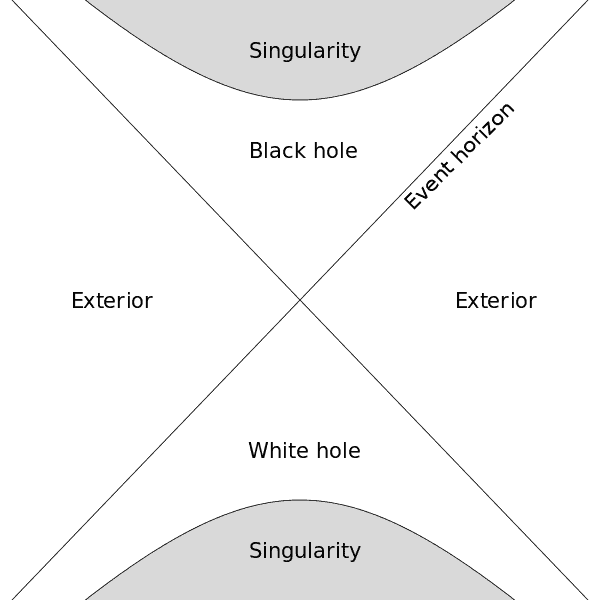 Though their existence is much debated, they might just exist only for a short period of time. Their formation is still discussed and controversial. In a sense, white holes are the exact opposite of traditional black holes, and some consider them to be the origin of our Universe. Some scientists regard the Big Bag as a supermassive white hole.

Some black holes actually spin. One of the fundamental properties of the Universe is that things that are spinning don't want to stop spinning. This is called angular momentum. A big celestial object that spins and becomes smaller spins faster. 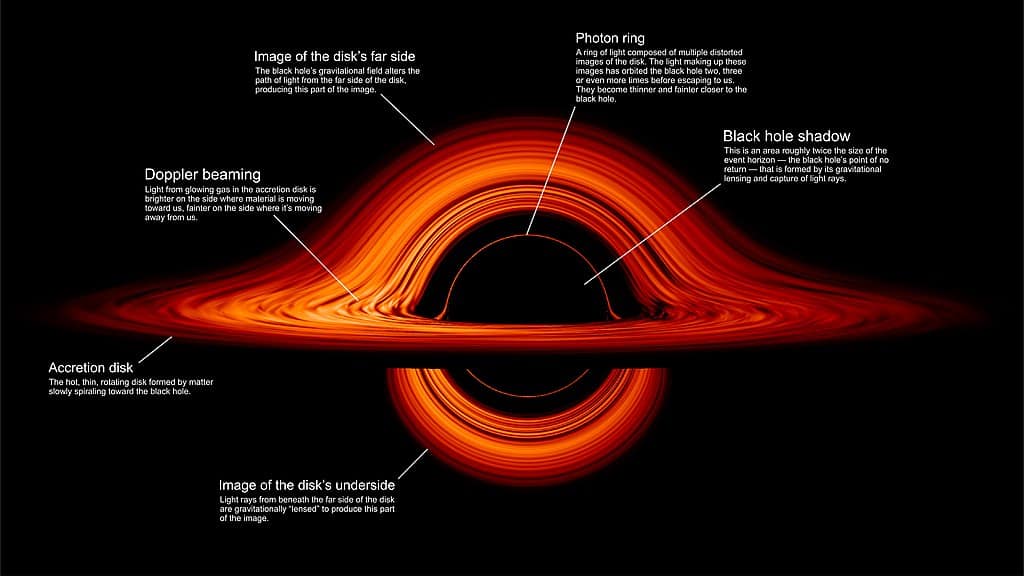 As the core collapses, its momentum makes it spin faster until it collapses into a black hole. Some black holes spin millions of times a second. Rotating black holes have an event horizon and a singularity at their core, just like regular black holes.

The singularity is a single infinitely small point with no surface area. When it comes to SBHs, the point singularity is replaced with a ring singularity or "ringularity." It is a ring with a thickness of zero, no surface, and spins extremely fast, containing all the black hole mass.

Due to its spinning speed, pace and time itself are morphed, literally dragging space with it. Because of this, a new region of space-time is created: the Ergosphere – it envelopes the black hole.

Understanding more about these exciting objects may well lead to the most significant scientific breakthroughs. As such, they will continue to be studied voraciously.

- The English philosopher and clergyman John Michell predicted the existence of black holes around 250 years ago.

- Some theorists suggest that the event known as the Big Bang was a supermassive white hole. Others believe that we live inside a black hole, a theory that may solve some questions but raise many others.

- If a black hole replaced the Sun, not a single planet would be pulled inside it. However, temperatures would drop drastically, and life would cease to exist.

- If you fall inside a black hole, you would suffer the effects of what scientists call the "spaghettification." Everything inside you would be torn apart.

- If you fall inside a spinning black hole, some hypotheses suggest that you could exit it in a different space-time.

- Black holes don't come without some paradoxes surrounding them. One such paradox is called the information paradox. Everything is made up of information. When something enters a black hole, that information is still there; however, with the discovery of Hawking radiation – thus black holes do die and disappear – this creates a massive problem as the information disappears completely.

- This currently violates the Universe's fundamental laws as information is neither created nor destroyed; it merely persists.

- The most distant black hole currently known is the ULAS 1J342+0928. It is an ancient quasar that emits light since the Universe was just around 690 million years old.