Comets, unlike other small bodies in the Solar System, have been known since antiquity. Keep reading for more interesting facts and information.

Looking for fun activities to teach kids about the planet Comets?

This premium worksheet bundle contains a printable fact file and 10 fun and engaging worksheets to challenge your students and help them learn about Comets. 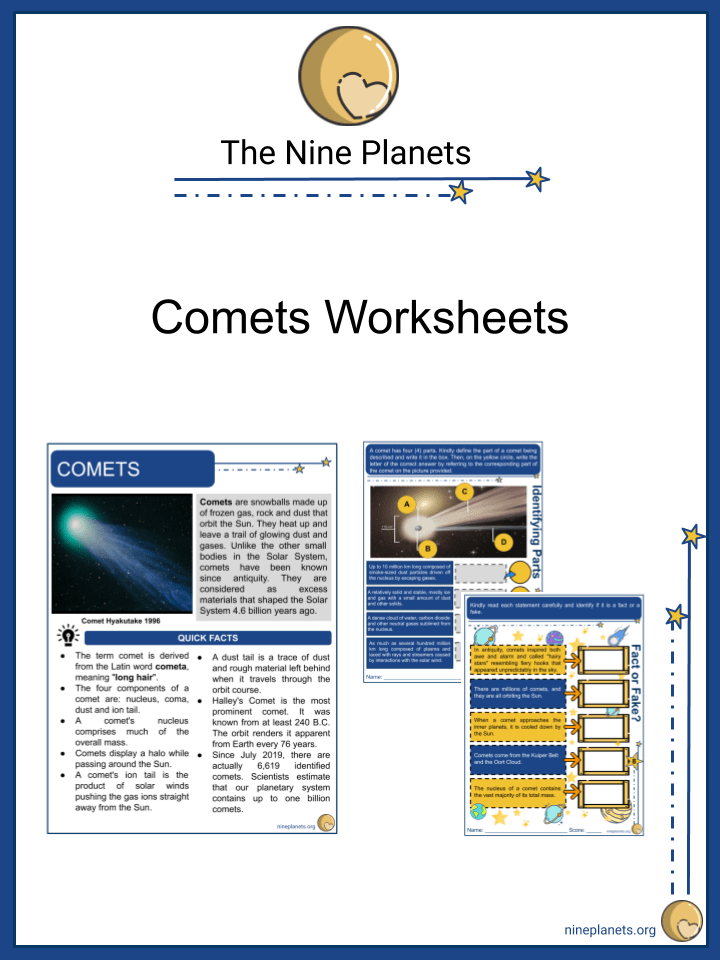 Comets are celestial objects made out of frozen gases, rock and dust that orbit the Sun. When frozen, they are the size of a small town. When a comet’s orbit brings it near the Sun, it heats up and spews dust and gases into a giant glowing head larger than most planets while the tail stretches away from the Sun for millions of miles.

Comets are beautiful, but in the distant past, they were also perceived as terrifying. Until the 16th century, comets were often considered bad omens such as the death of kings, coming catastrophes, or even interpreted as attacks by heavenly beings.

Now, we know more about them and how they work. Comets orbit the Sun just like the planets and asteroids do. However, comets usually have a very elongated orbit.

These highly eccentric elliptical orbits make them have a wide range of orbital periods, ranging from several years to potentially several millions of years, so watch closely the night sky as viewing any comet could be a once in a lifetime chance!

When a comet gets close to the Sun, some of the ice starts to melt and boil off, along with particles of dust. These particles and gases make a cloud around the nucleus, called a coma, which can extend between hundreds to thousands of km. The nucleus is the solid core structure of a comet, no larger than a few km, and it is composed out of rock, dust, water ice, and frozen carbon dioxide, monoxide, methane, and ammonia.

The coma is lit by the Sun, and the stream of materials released is generally made of water which makes for 90% of the volatiles that outflow from the nucleus when the comet is within 3 to 4 AU of the Sun. The sunlight also pushes this material into an amazingly bright-lit tail of the comet.

A comet’s tail can extend up to several million kilometers/miles, and it is the most prominent part of a comet to the unaided eye.

Comets have been classified into two distinct categories:

One AU is the distance between Earth and the Sun. Short-period comets have relatively small orbits, usually below 10 AU. They follow the ecliptic plane, which is where the planets lie.

Long-period comets have huge orbits that can reach thousands of AU, taking them far beyond the orbit of the dwarf planet Pluto. They also appear from any given point in the sky and are very unpredictable.

Comets are leftovers from the birth of the Solar System that occurred around 4.6 billion years ago. They consist mostly of ice coated with dark organic material. Many refer to them as “dirty snowballs.”

These small celestial objects hold many important clues and information on our Solar System. Comets may have brought water and organic compounds, the building blocks life, to the early Earth and other parts of the Solar System.

Where do comets come from? Well, there are two answers to this question. Comets come from both the Kuiper Belt and the Oort Cloud.

Short-period comets, that take around 200 years to orbit the Sun, come from the Kuiper Belt. The belt is located beyond Neptune, and it is full of icy bodies that are occasionally pushed by gravity into orbits that bring them closer to the Sun.

The long-period comets come from the Oort cloud, and it takes several million years for some of them to orbit the Sun. The Oort Cloud is located at around 100,000 AU away from the Sun.

Comets usually travel at a safe distance from the Sun. The famous comet Halley, for example, comes no closer than 89 million km / 55 million mi. However, some comets, called sungrazers, crash straight into the Sun or get so close that they break up and evaporate.

How comets get their names

Comets are named after their discoverer, either a person or a spacecraft. This guideline was developed only in the last century. For example, the comet Shoemaker-Levy 9 was named as such because it was the ninth short-periodic comet discovered by Eugene Carolyn Shoemaker and David Levy.

The jewel of amateur astronomers