The Constellation of Aquarius Facts For Kids

Aquarius is the 10th largest constellation in the sky, measuring up to over 980 square degrees. Keep reading for more interesting facts and information perfect for kids.

The constellation of Aquarius is one of the 12 constellations of the zodiac. Its name, Aquarius, means the "water-carrier" or the "cup-carrier," and it is of Latin origin.

Printable The Constellation of Aquarius Worksheets

Looking for fun activities to teach kids about The Constellation of Aquarius?

This premium worksheet bundle contains a printable fact file and 10 fun and engaging worksheets to challenge your students and help them learn about The Constellation of Aquarius. 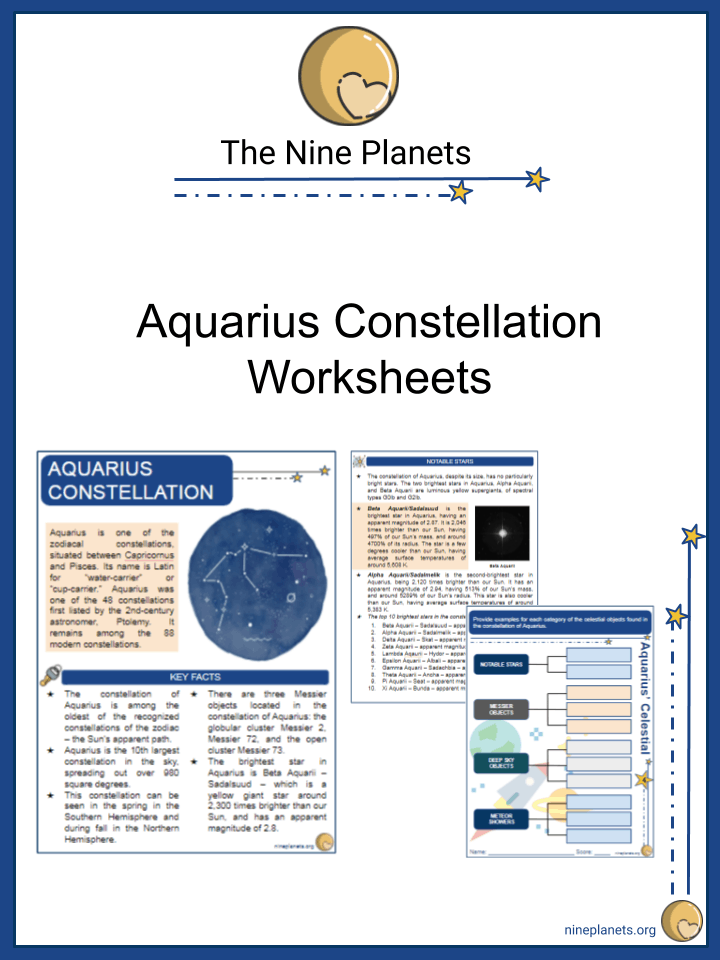 The Aquarius Constellation for Kids

Aquarius is known to be the 10th  largest constellation in the sky. It was first mentioned in the second century by Claudius Ptolemy, an essential Greek astronomer and mathematician. 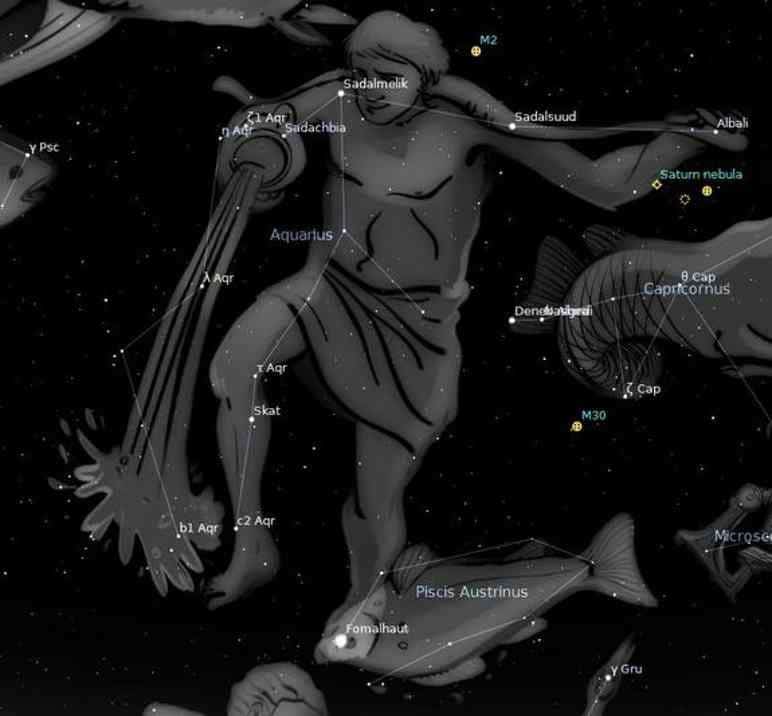 But there is even an earlier mention of The Aquarius Constellation from around the twelfth century BC. In the Babylonian star catalogs, written on stones and cylinder seals, the Aquarius constellation has been recorded under the name GU.LA, which translates as "The Great One," and it represented Ea, a water god, thus its symbol - .

In old Babylonian astronomy, Ea was the ruler of the southernmost quarter of the Sun's path. The "Way of Ea" corresponds to the period of 45 days on either side of the winter solstice.

What Does the Constellation of Aquarius Represent?

If we connect the dots between the stars that form the Aquarius constellation, we can see the shape of a young man who pours water out of a vase.  If we take a closer look, we can see that he pours the water into the mouth of a fish, which is part of the constellation below, the Pisces.

In Greek mythology, the young man portrayed in the constellation represents Ganymede, the son of King Tros. The story starts when Zeus first saw the boy down on Earth. He liked him so much that he sent Aquila, his eagle, to kidnap Ganymede and to bring him to Mount Olympus. Soon after, Zeus made Ganymede the cup-bearer.

He had to fill the Gods' cups with wine whenever needed, and for that service, he was promised eternal youth.  And he did receive eternity as he lives on in the constellation of Aquarius.

Where Can You See the Constellation of Aquarius?

The Aquarius Constellation is located in a specific part of the sky called "The Sea." The name is explained by the many water-related constellations that are also present in this part of the sky, such as Cetus - the whale, Eridanus - the river, Pisces - the fish.

More precisely, it is located in the Southern Hemisphere's Fourth Quadrant (SQ4), between 65 degrees and -90 degrees, and it is the most visible during October at 9 p.m. / 21:00. 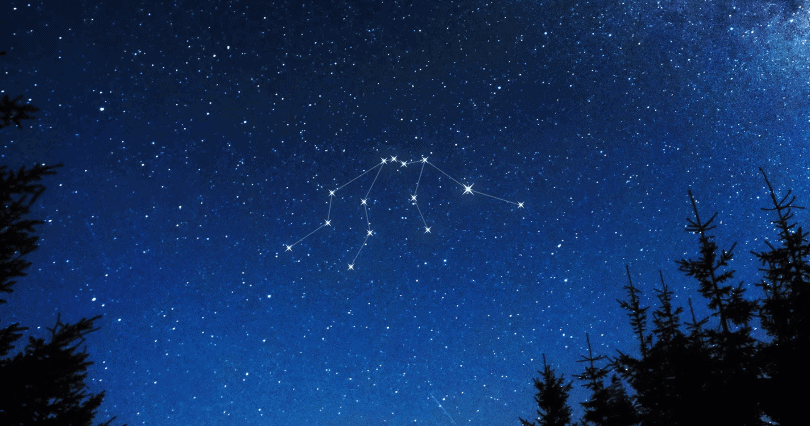 Even though Aquarius spreads over 980 square degrees, it isn't easy to be seen with the bare eye. Why? Because it has only a few bright stars, and you need a clear sky and almost no light pollution to spot it. Its brighter star, Sadalsuud, has a magnitude of only 2.87.

But if you have trouble seeing it, you can always look for the brightest star in the region, Fomalhaut. This star is part of the Pisces Constellation, which is just below the Aquarius Constellation.

Why is Aquarius Known as the Luckiest Constellation?

Aquarius is known as the luckiest constellation for many reasons. One of them lies in the belief of Sumerians that Aquarius can bring rain and floods. The explanation behind this belief is that when the rainy season began in the Middle East coincided with the Sun rising in Aquarius. 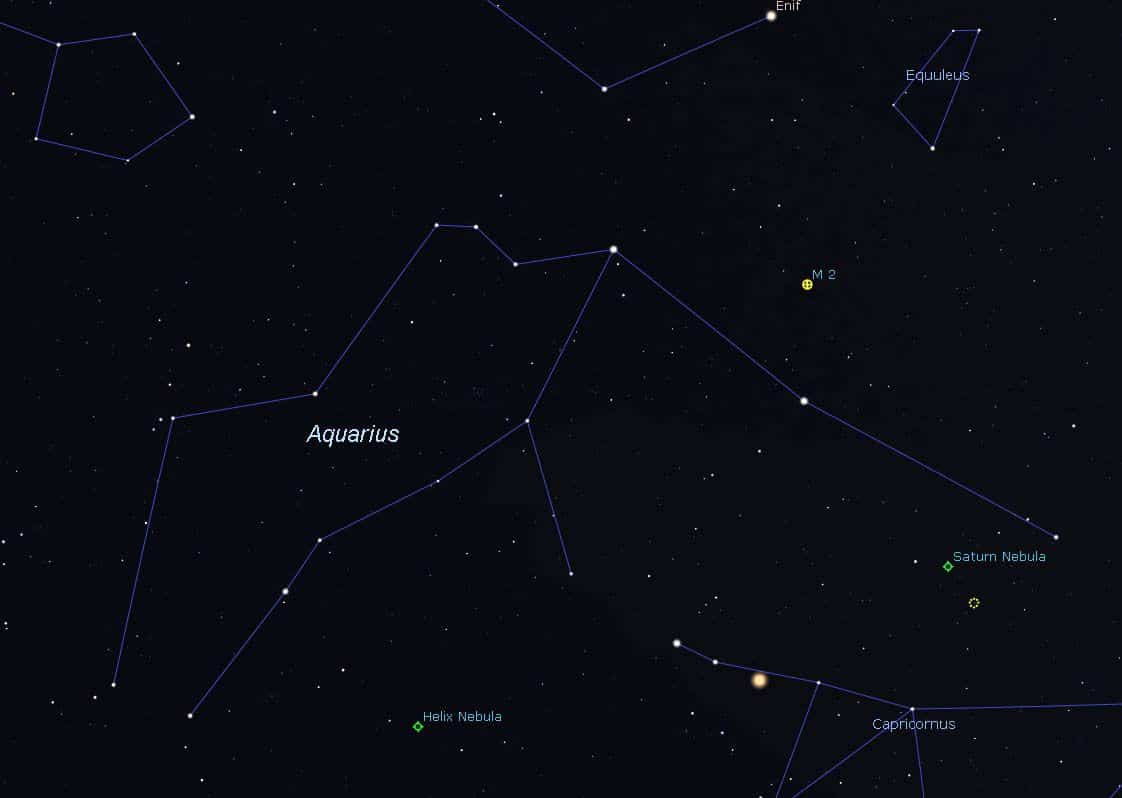 For this reason, many of the stars that make up this constellation refer to good luck. For example, the second-brightest star in Aquarius, Alpha Aquarii, is officially named Sadalmeik, from the Arabic term "sa'd al-malik," which means "luck of the king."

Moreover,  in Chinese astronomy, the water poured from the vase of Aquarius was associated with an army named the "Army of Yu-Lin."  Some of the other stars from the Aquarius Constellation form the "Leibizhen" wall, which is believed to protect the celestial army during war times.

Fun Kids Facts About the Constellation of Aquarius

-This constellation was negatively connoted for a long time because it was frequently related to the floods used to bring disaster in Babylonia.

- According to a Summerian legend, Aquarius was the emissary who brought the destructive flood that occurred during Noah's time. It is said that Aquarius held the vase from which the water came to Earth directly from Heaven. The flood was so powerful and destructive that only Noah and the animals on his boat survived.

- An astrological age lasts around 2,160 years and represents the time it takes for humanity to change regarding culture, politics, and society completely. For an astrological age to begin, the Sun must be in a particular constellation on the vernal equinox. We are currently living in the Pieces age, but the Aquarius Ages is next in line, and it will start in the year 2597.

- Each year, three meteor showers who appears to come from the Constellation of Aquarius occur. The Delta Aquarid Meteor Shower is among the most impressive ones, and it produces meteors throughout the end of July and the beginning of August. Its meteors burn up somewhere around 60 miles (100 kilometers) above Earth's surface.

- Aquarius is the 11th sign in the Zodiac, and those born between January 20 and February 18 lay under his sign. Starting from 2002, the Sun appears in the constellation of Aquarius from February 16 to March 11. 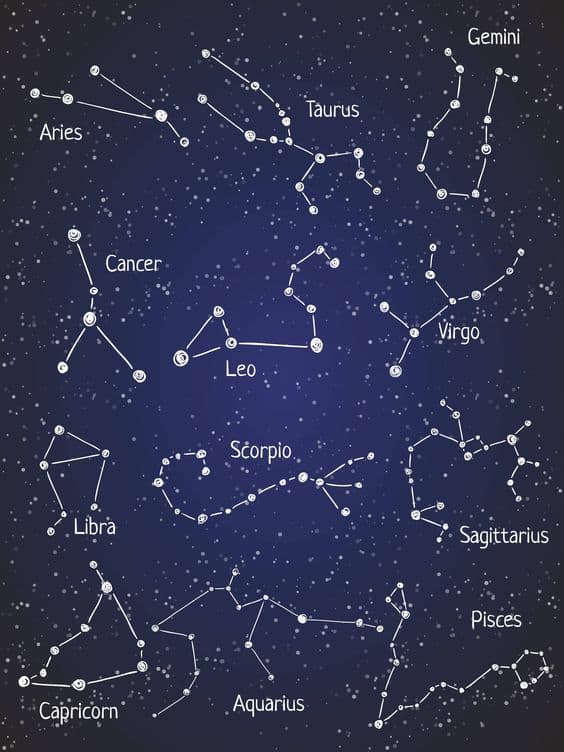 What Are the Major Stars in the Constellation of Aquarius?

Even though Aquarius is not known to be one of the brightest constellations, it has within it a rare star that has a magnitude of 2.87. Situated at 600 light-years way, Sadalsuud, also known as Beta Aquarii, is the brightest star of this constellation, and it is also one of the few yellow supergiants.  It has a mass six times greater than our Sun, and it is 2.200 times more luminous than it is. 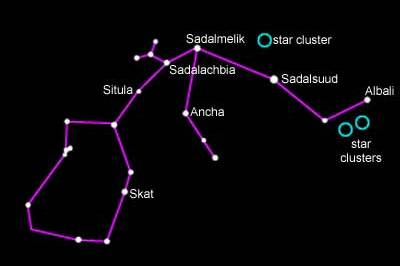 Alpha Aquarii is another notable star from this constellation, and it is also a yellow supergiant. It is found 760 light-years away from Earth, and it is 2.100 times more luminous than our Sun, having a magnitude of 2.950.

The stream of water pouring from the vase is made up of more than 20 stars, the last one being Fomalhaut, also known as the "Eye of Sauron."

An asterism is a group of stars that can be seen in the night sky. Is the Constellation of Aquarius Aquarius an asterism? No, because constellations and asterisms are two different things, even if they may seem the same at first.

Unlike asterisms, constellations have officially determined boundaries, and they contain all the celestial objects within it, while an asterism refers to any identified pattern of stars.

What Asterisms are in the Constellation of Aquarius Aquarius?

The Y in the Constellation of Aquarius is an asterism. Its main star is Gamma Aquarii, or Y Aquarii, a binary star with a magnitude of 3.849. 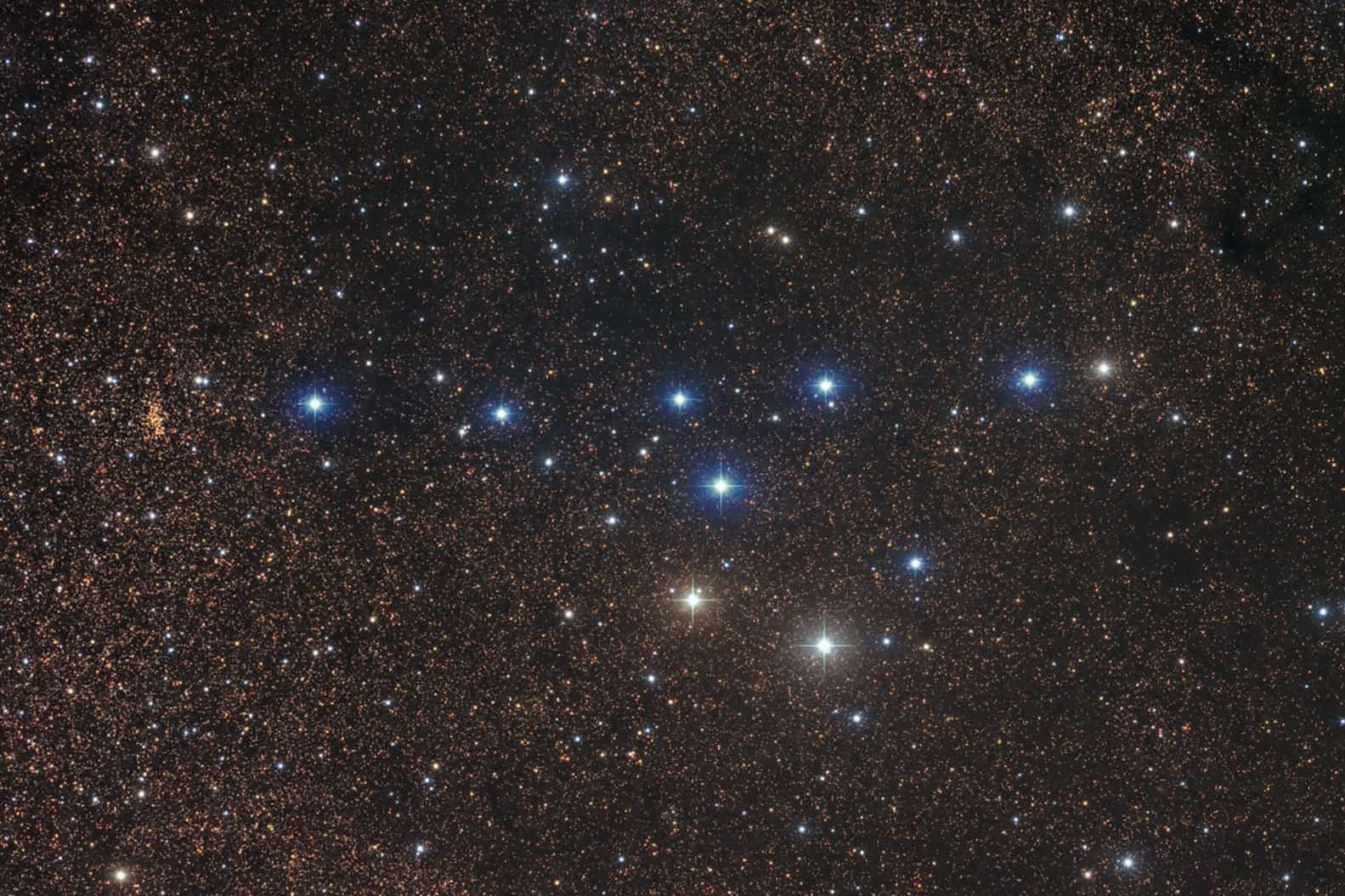 Other Characteristics About the Constellation of Aquarius

The stars that form the Aquarius are nowhere near each other, even though this is what it seems like when we look at it. They are light-years away, but when we talk about space, this is a regular thing.

-Its brightest star is Beta Aquarii, also known as Sadaalsud.

- The Y in the Constellation of Aquarius is an asterism.

- Aquarius was first referred to in the Babylonian star catalogs under the name "The Great One."

- Two of the most famous nebulae are located in Aquarius, namely the Saturn Nebula and the Helix Nebula.

- There are three Messier objects in Aquarius, the globular clusters Messier 2, Messier 72, and the open cluster Messier 73.