Galaxies are a relatively recent discovery. A couple of years ago, we viewed them as nebulae. Keep reading for more interesting facts perfect for kids.

Looking for fun activities to teach kids about Types of Galaxies?

This premium worksheet bundle contains a printable fact file and 10 fun and engaging worksheets to challenge your students and help them learn about Types of Galaxies. 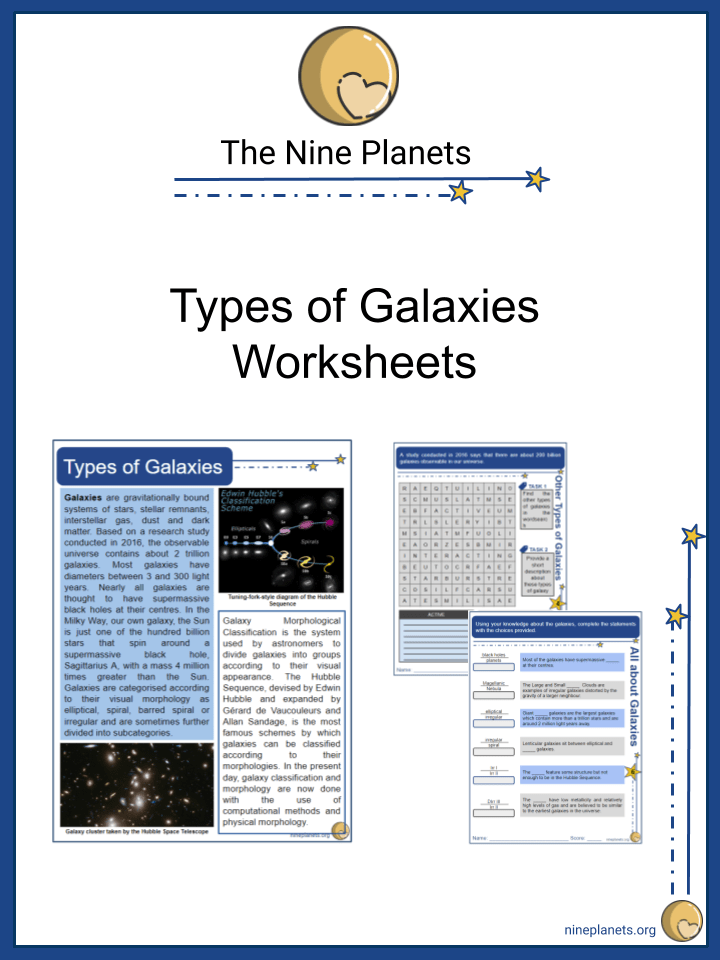 Galaxies are immense structures of stars, gas, dust, stellar remnants, and dark matter. Billion of galaxies exist in our Universe, and our Milky Way is just one of them.

Our Universe is filled with galaxies of different shapes and sizes. Galaxies are the building blocks of the Universe since they contain millions or even billions of stars, planets, dwarf planets, moons, and other celestial objects. 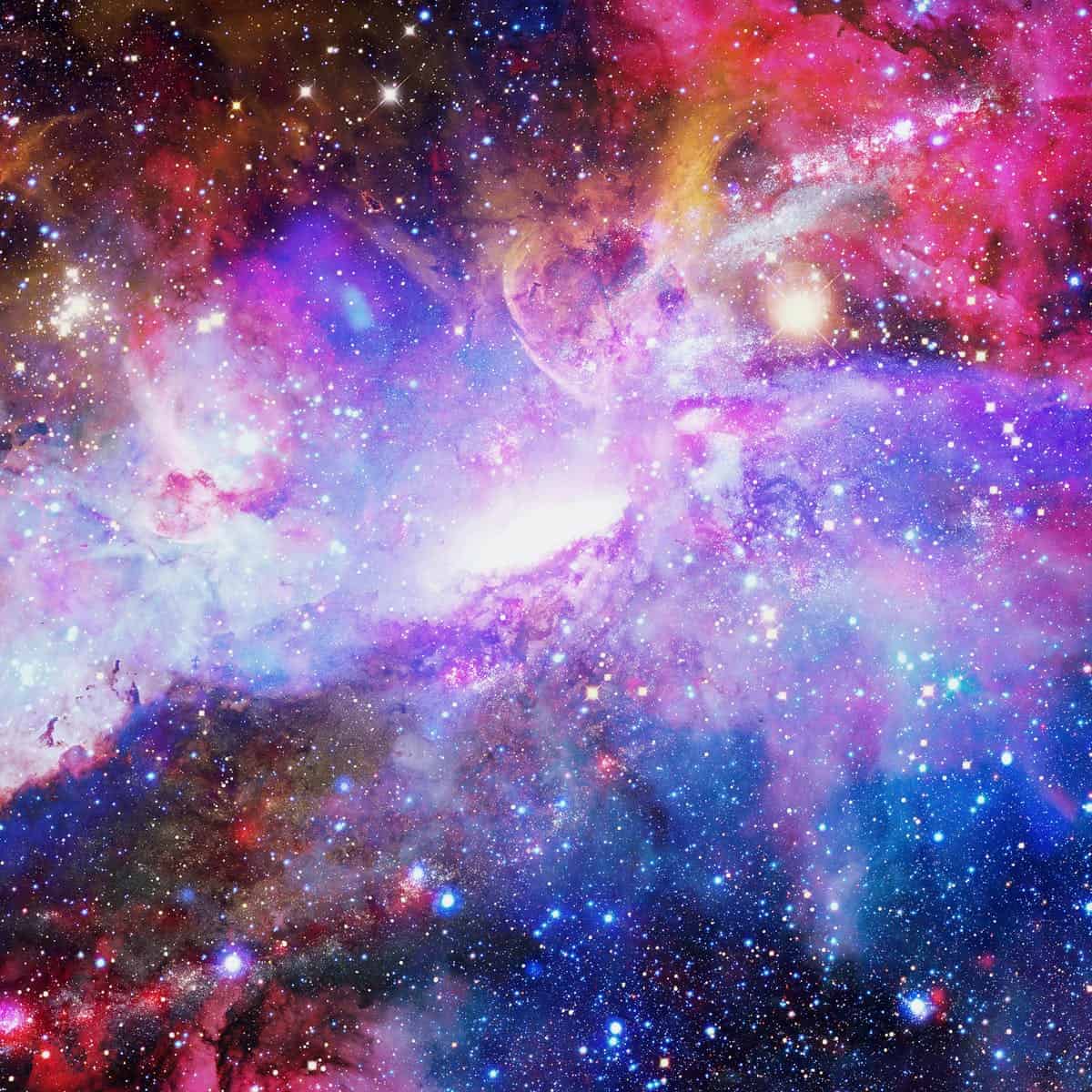 Based on their characteristics, we have classified galaxies into four significant groups. Let us see what type of galaxies exist and what makes them so unique.

The four types of major galaxies are spiral, barred, elliptical, and irregular galaxies. Here is what sets them apart!

This type of galaxies has a flat, spinning disk and a central bulge surrounded by several spiral arms where most star formation occurs. 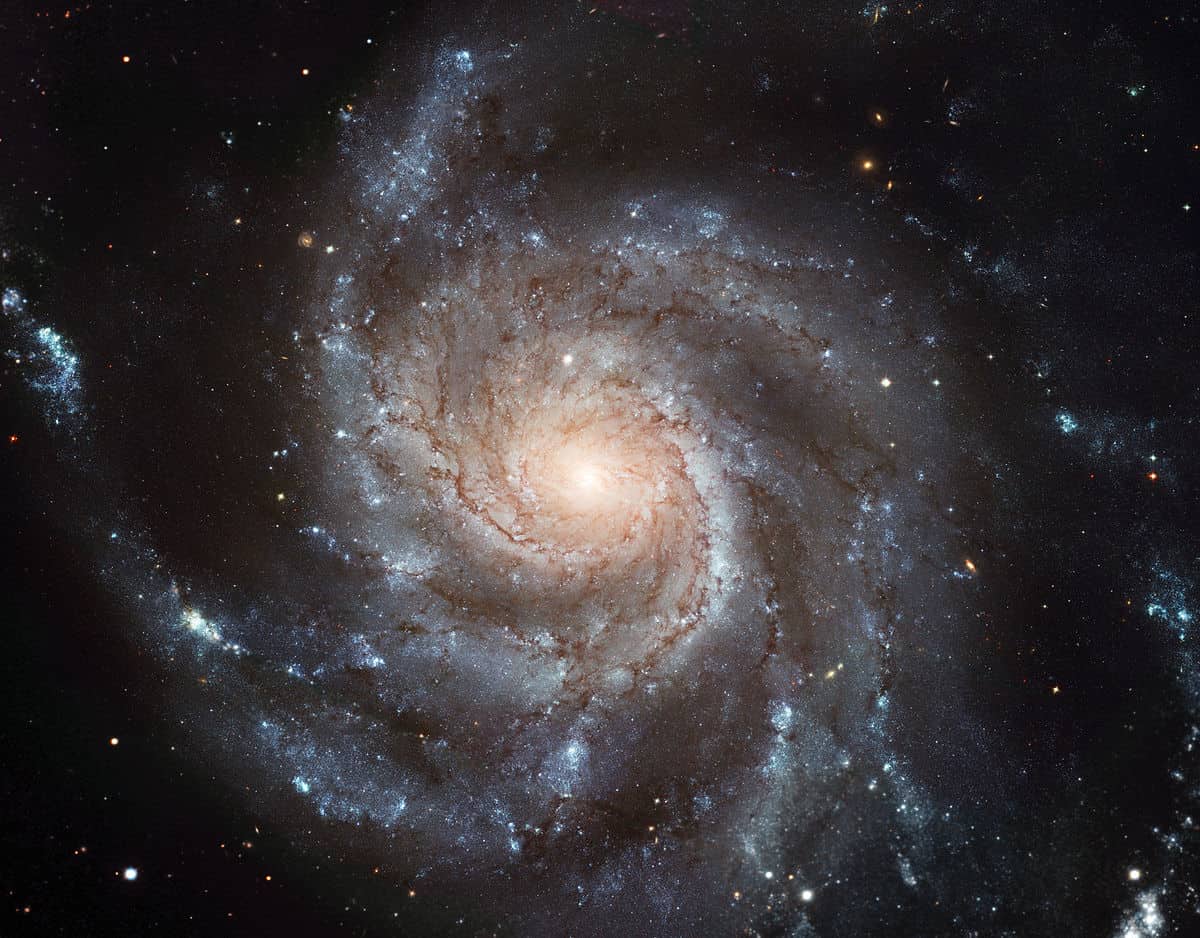 Elliptical galaxies come in different sizes, from small dwarf ones to gigantic specimens tens of times bigger than our Milky Way. These types of galaxies an elongated, spherical shape and usually lack a bulge at the center. 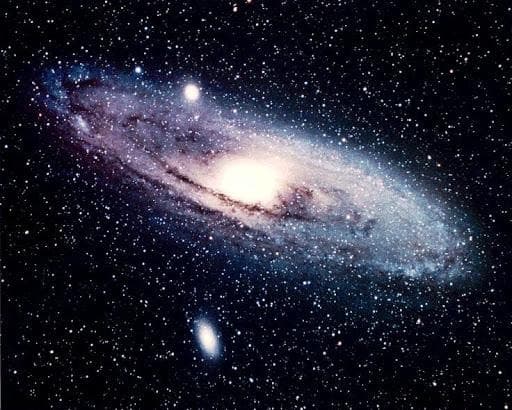 Even without this nucleus, they are still very bright in their center. Ancient stars typically live in these galaxies, and they are red in color. Elliptical galaxies lack spiral arms, and everything within them seems to be spread throughout. When it comes to their shape, they can be round, long, or cigar-shaped.

These galaxies don't have an exact shape, and they are in constant motion just like everything else in the Universe. They have a rather unnatural appearance, chaotic even, as they lack a bulge or any spiral arms. 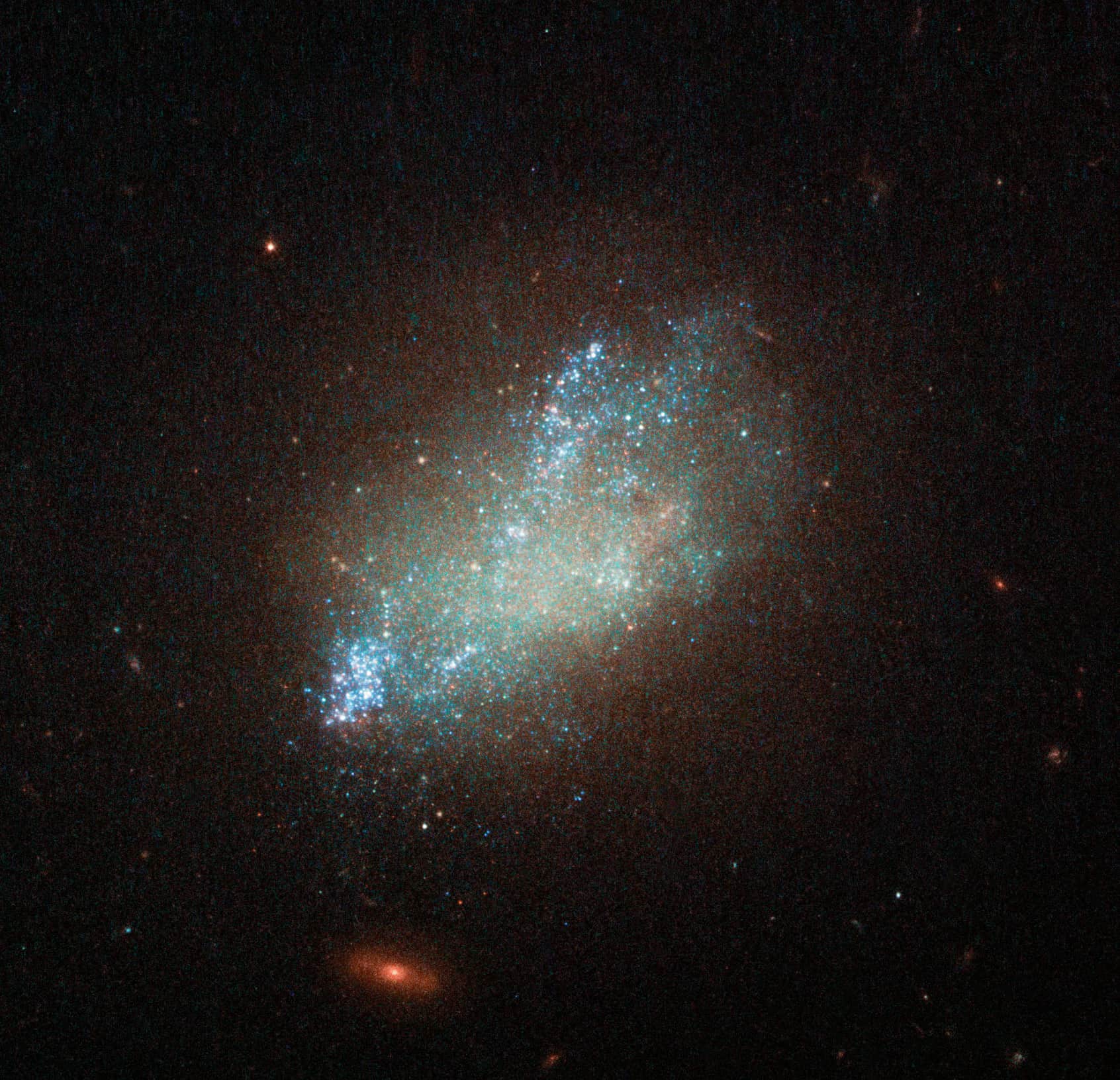 Irregular galaxies form out of spiral or elliptical galaxies after they suffer through external gravitational forces, such as when galaxies merge together, perhaps.

Galaxies in this category are relatively poor in stars, gas, and dust. They are generally much smaller than our Milky Way.

Spiral galaxies and barred spiral galaxies are very similar. However, they have a bar of very bright stars aligned along the center of their bulges, which extends towards their disks. 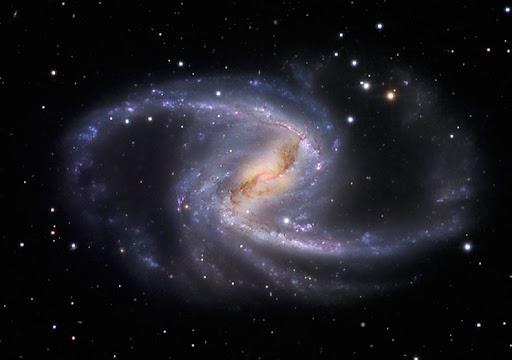 Both the bar and the spiral arms are vital regions of star formation. Our Milky Way is a barred spiral galaxy.

Let's take a look at four examples of galaxies and their sizes. The Milky Way is a barred spiral galaxy, and it extends up to 100,000 light-years across.

The Andromeda Galaxy is a spiral galaxy that is twice the size of our own galaxy. The Magellanic Clouds are irregular galaxies, and the biggest of them is stretching for merely 7,000 light-years. 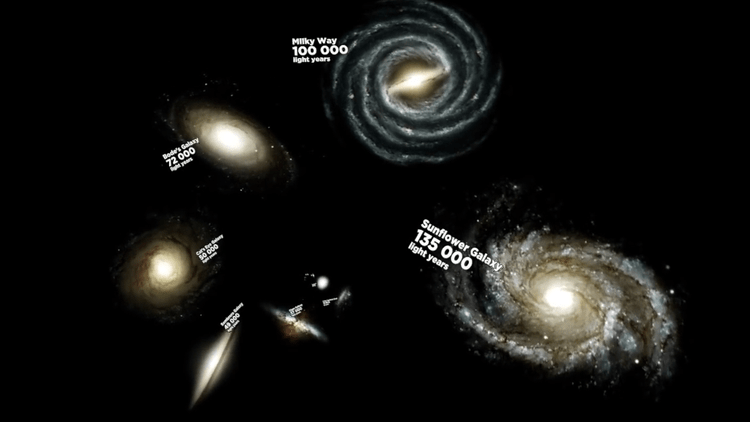 - Our Milky Way has more than 100 thousand million stars. Our Sun is just one of them.

- The Milky Way and Andromeda will merge with one another in around 4.5 billion years from now. When this happens, an elliptical galaxy may emerge from this event.

- Galaxies can have satellite galaxies orbiting around them. Our Milky Way, for example, has the Magellanic Cloud galaxies as satellites, among others.

- It is currently unknown how large or how small galaxies can get.

How Many Galaxies Are There?

With our current technology, it is estimated that there are between 100 to 200 billion galaxies in our Universe. There may be more out there, and if you take into account the satellite galaxies, their number is difficult to ascertain. 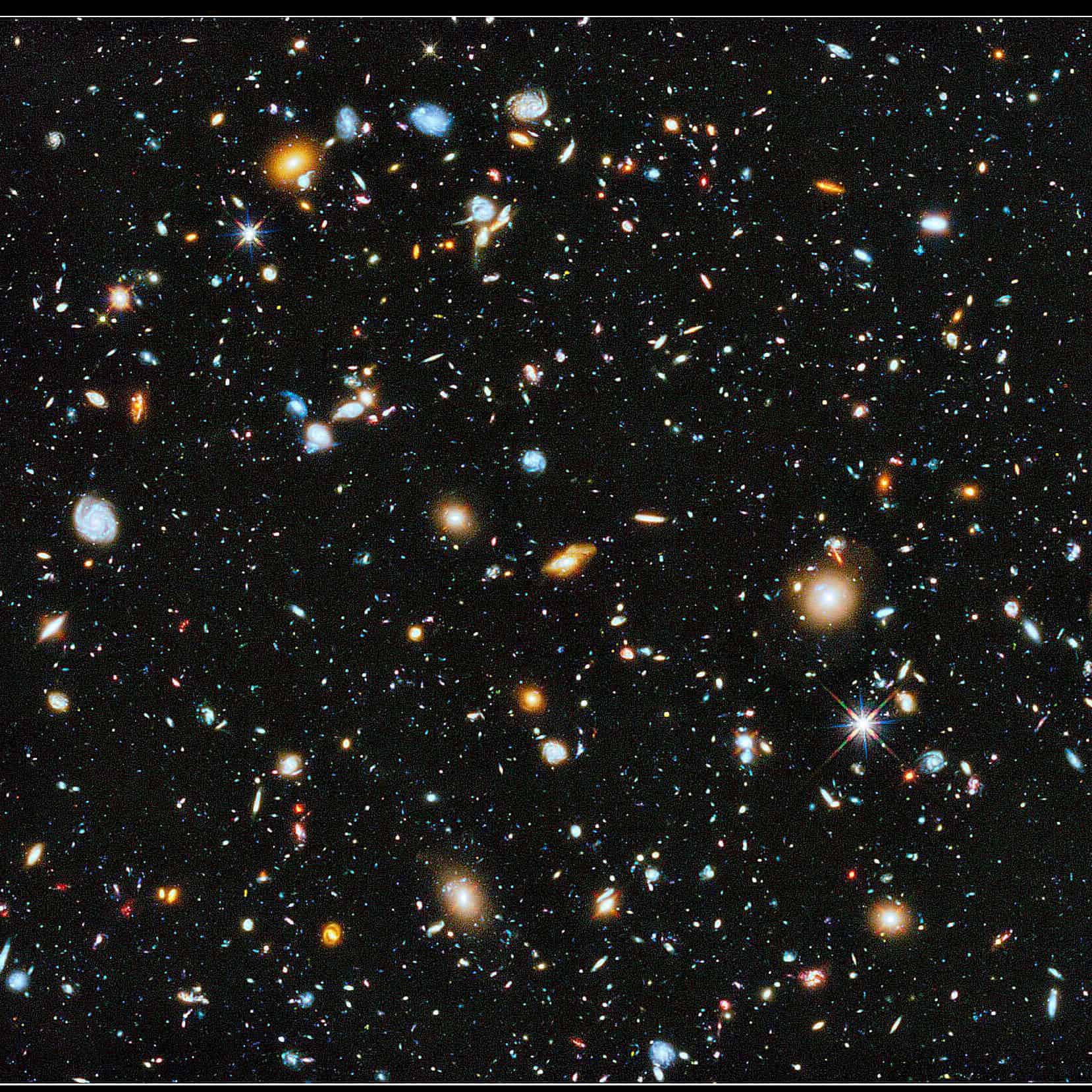 What are the Four Type of Galaxies?

Where are We in Our Galaxy?

Our Solar System is located in one of the Milky Way's spiral arms, specifically, the Orion Arm. This minor spiral arm is a substantial location of star formation. Everything in the Universe is moving, even inside galaxies, so in a couple of millions of years, our Solar System will be in another region of our galaxy. 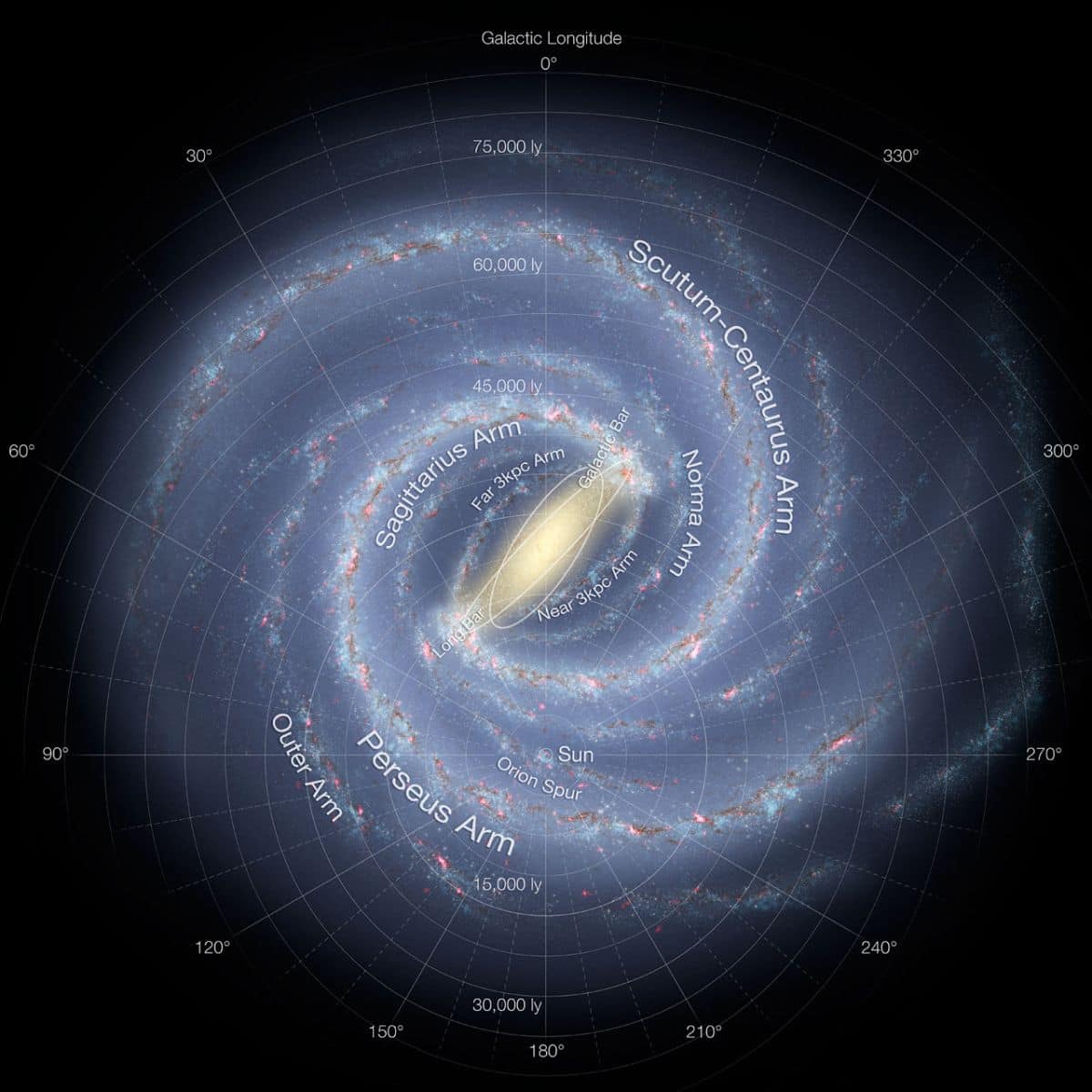 What Does Galaxy Mean?

A galaxy is a system of millions to billions of stars mixed with gas and dust, which is held together through gravitational interaction.

What is the Biggest Galaxy?

The biggest galaxy currently known is the supergiant elliptical galaxy IC 1101. This galaxy stretches for more than 2 million light-years across, and it contains at least 100 trillion stars. It is located at around 1 billion light-years away from our Milky Way, and it is an apparent magnitude of 14.73. 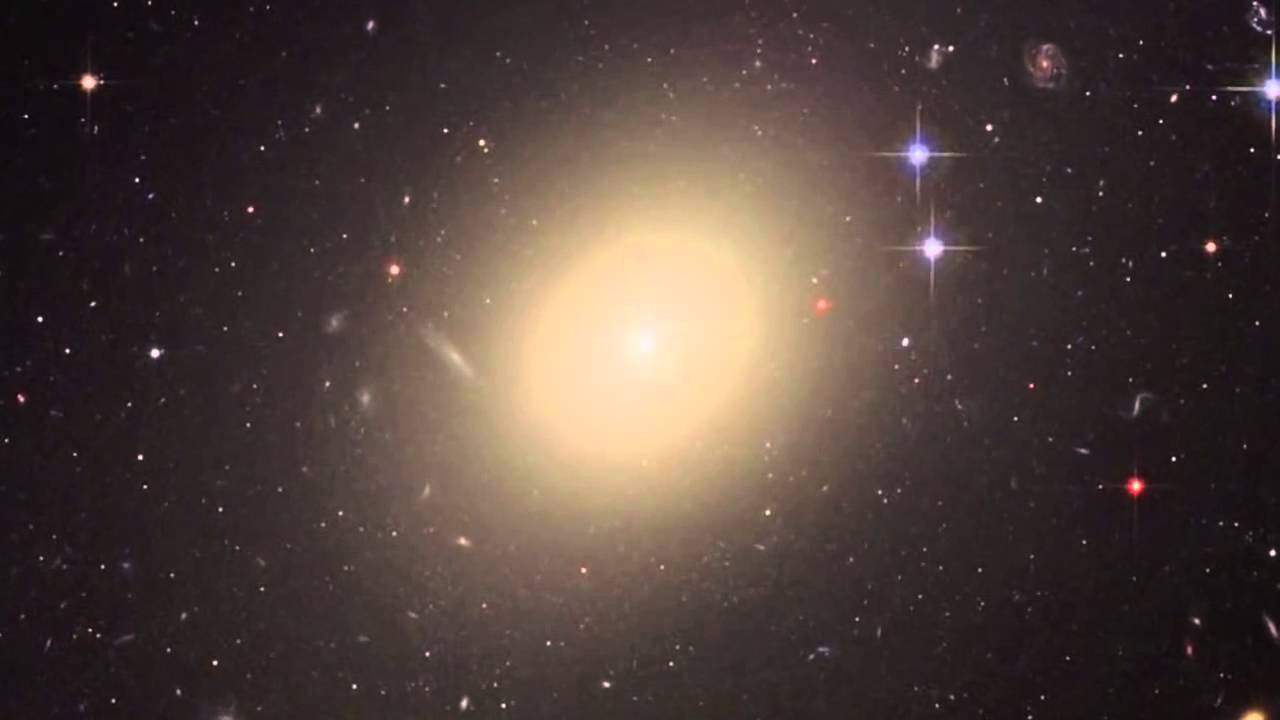 - Galaxies are the building blocks of the Universe, and there might well be over 200 billion galaxies out there.

- We are located in the Milky Way galaxy, which is itself part of the Local Group of galaxies.

- There are four types of galaxies that are classified based on their size, shape, and unique characteristics – spiral, barred, elliptical, and irregular galaxies. Several other categories of galaxies exist, but these four are the major ones.

- Galaxies devour one another, and they grow in size by doing so. In about 4.5 billion years, the Andromeda and our Milky Way will merge together in a super galaxy.