Haumea is the third dwarf planet from the Solar System, orbiting the Sun in the Kuiper belt. Keep reading for more interesting facts and information perfect for kids.

Haumea is the third-largest dwarf planet and is among the five most famous dwarf planets of the Solar System. Haumea is also the fastest spinning dwarf planet, and it has a unique shape.

Looking for fun activities to teach kids about Haumea?

This premium worksheet bundle contains a printable fact file and 10 fun and engaging worksheets to challenge your students and help them learn about Haumea. 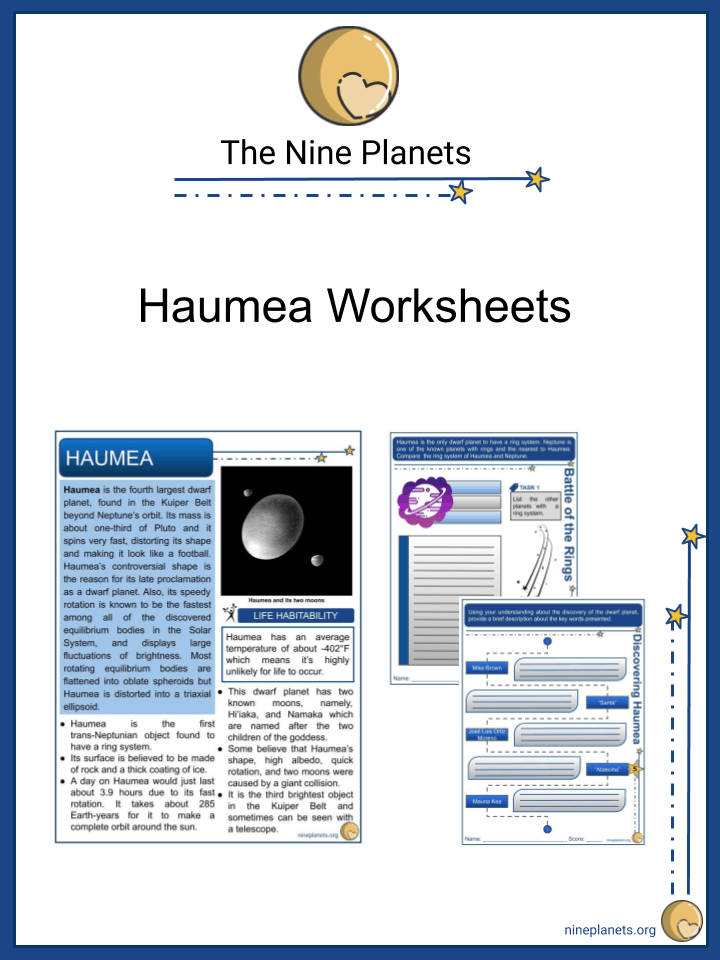 The dwarf planet Haumea is among the most exciting dwarf planets out there! It has two moons, a ring system, and its shape is quite unique among other dwarf planets. 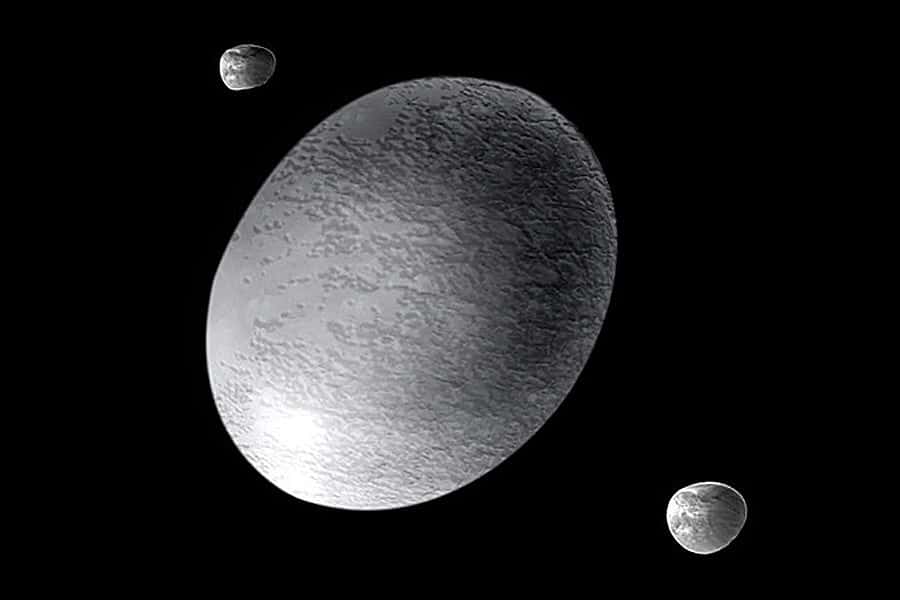 Haumea is the third-largest dwarf planet in the Solar System, and it is quite far away from us, at 51 AU – one AU is the distance from the Earth to the Sun.

Haumea has an ellipsoidal shape due to an ancient impact. Its composition consists of a mixture of rock and ice. It is believed actually to be covered in a thin ice coating. It is one of the densest Kuiper Belt entities. Its density is 1.885 grams per cubic centimeter.

In 2009, Dr. Lacerda (from Queen's University Belfast) discovered a dark red area on the tiny planet, a crater that shows Haumea's interior. The scientist observed how the brightness changed while spinning. 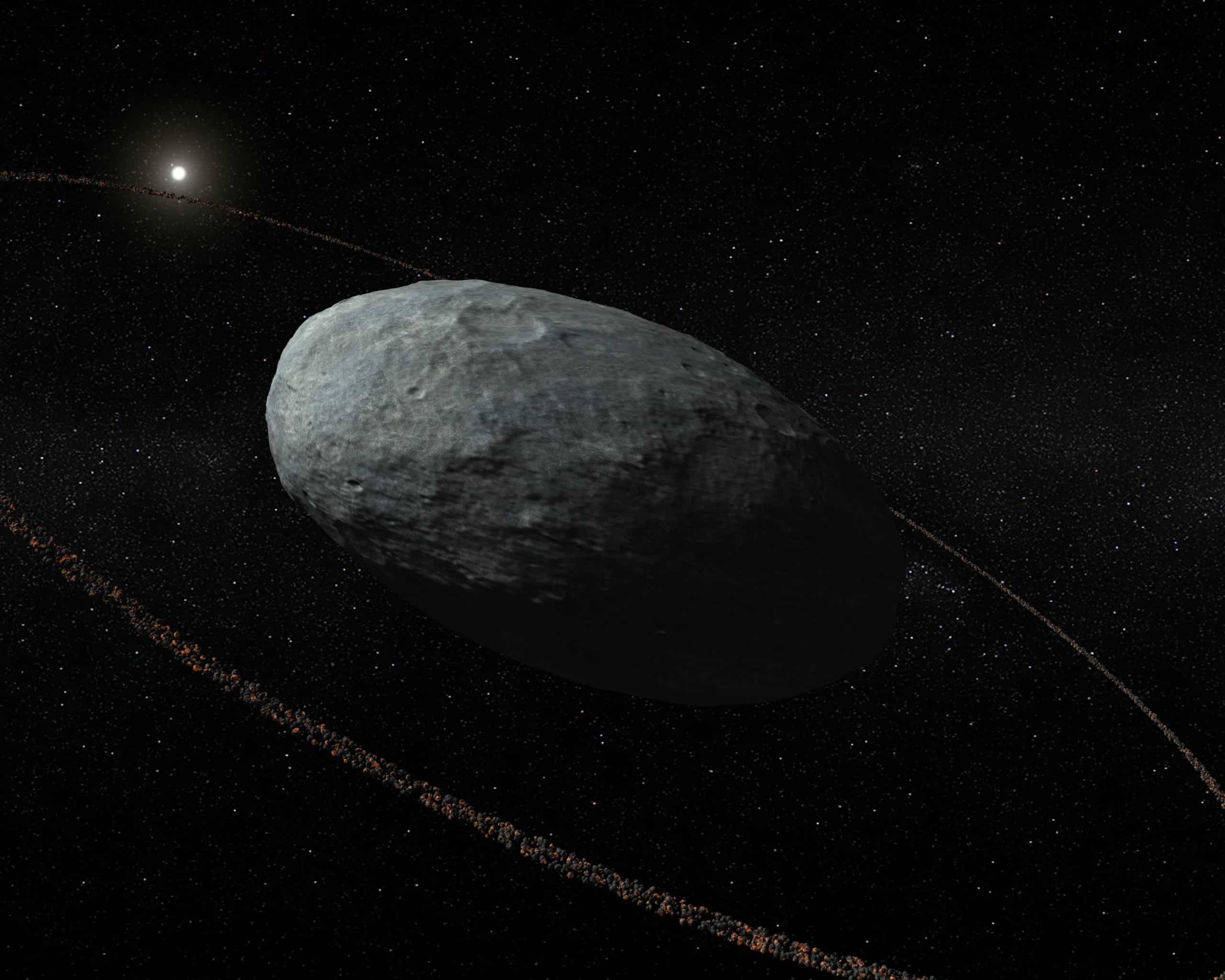 The color's opacity is more noticeable in visible light, while at infrared wavelengths, it is a tad bluer. This specific spot is considered to be rich in organic elements, minerals, and crystalline ice.

Haumea is one of the fastest rotating objects in the Solar System. Thus the days are very short – one day on the dwarf planet equals four hours on Earth. One year on Haumea is the equivalent of 285 Earth-years. This is how long it takes for Haumea to move around the Sun once. 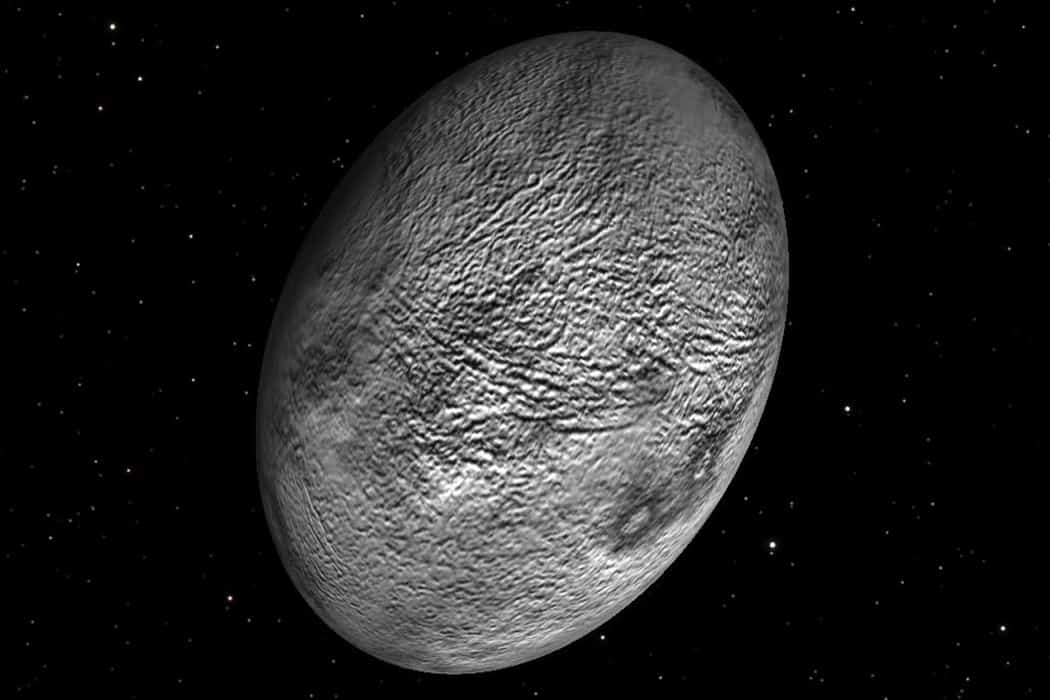 -  Haumea is located beyond Neptune's orbit.

-  Haumea and Pluto are almost the same size.

- The tiny planet and its moons were named after a Hawaiian goddess and her daughters. In mythology, she represented fertility and childbirth.

- Haumea has this egg- shape due to a collision that took place a long time ago, which made it spin really fast. Its shape is unique amongst the other dwarf planets.

- It is the third brightest object in the Kuiper Belt – visible with a good telescope on a clear night.

- In 2017, scientists discovered a ring around Haumea, which made it the first known Kuiper Belt object with such a ring system.

- The dwarf planet is seven billion kilometers away from the Earth, or 51 AU.

- Its surface is exceptionally bright due to its icy exterior. It almost looks like a snow-covered frozen lake.

Haumea has a diameter of approximately 1.632 kilometers/1014 miles. You can fit three Haumeas side by side into Earth. Here are the sizes of the rest of the dwarf planets:

Haumea was discovered in 2004 by Mike Brown and his team (Palomar Observatory, California). At first, they named the planet "Santa." 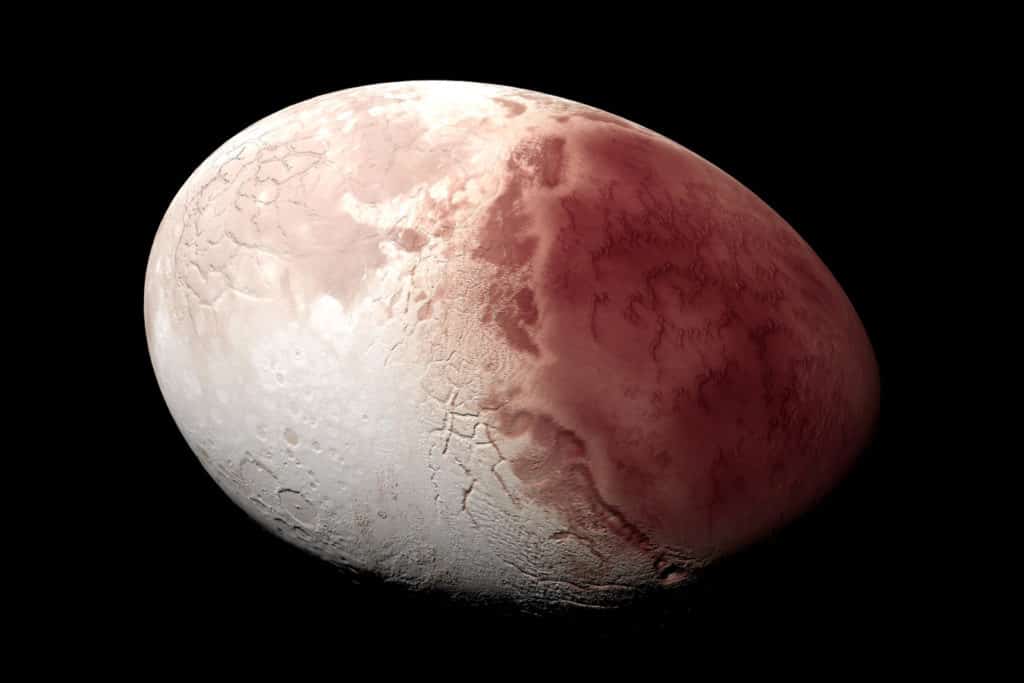 They did not report their discoveries and results right away, so another team of astronomers (Sierra Nevada Observatory, Spain) stole their idea and proclaimed it on July 27, 2005. Finally, the IAU gave credit to the Spanish team and took the name from the Caltech team.

Why Does Haumea Spin so Fast?

A collision with some object that took place ages ago made Haumea spin really fast.  It has by far the fastest spin and also the shortest day amongst any other object in the Solar System. If it spun any quicker, the planet would split itself in two.

What is the Gravity on Haumea?

What is the Gravity on Haumea? Gravity on Haumea is approximately 4.5% of the strength of Earth's.  If you were on the planet right now, you probably wouldn't see the sky when looking up because gravity can't hold on to an atmosphere.

Other Characteristics of Haumea

The temperature on Haumea is -241 degrees Celsius/ -401.8 Fahrenheit, which doesn't support any form of life.

At first, its small size and significant distance made it hard for scientists to approximate its size and density. In 2017, scientists discovered its mass and shape is very similar to Pluto's.

Haumea has a radius of approximately: 620 km / 385 mi. Because of its fast-spinning, Haumea might be shedding parts of its surface. The components could have collected close to the tiny planet, forming the ring, and later on the two moons.

- There weren't any missions sent to Haumea.

- The atmosphere is composed of ethane, methane, and perhaps nitrogen ices.

-  Its icy surface is similar to Pluto's moon – Charon.

- Hi'aka – one of the moons – is the biggest satellite discovered around a dwarf planet ( 350 km / 217 mi in diameter). It is the 5th largest object located in the Kuiper Belt. It's covered in crystalline ice, and it has a fast rotation rate.  It appears to be brighter than Namaka. It orbits Haumea in a round motion every 49 days.

- Namaka is the tenth moon size-wise. It has a weird orbit as a result of the other moon's presence. It orbits Haumea in 18 days in a non-Keplerian, elliptical orbit.

- Hi'aka's nickname is "Rudolph the Red-Nosed Reindeer" and Namaka's  - "Blitzen the Reindeer." They got their official names on 17th September 2008 by IAU.

-  A mission to Haumea would take about 14.25 years. Nevertheless, no missions to the dwarf planets have been confirmed.