Looking for fun activities to teach kids about Neutron Stars?

This premium worksheet bundle contains a printable fact file and 10 fun and engaging worksheets to challenge your students and help them learn about Neutron Stars. 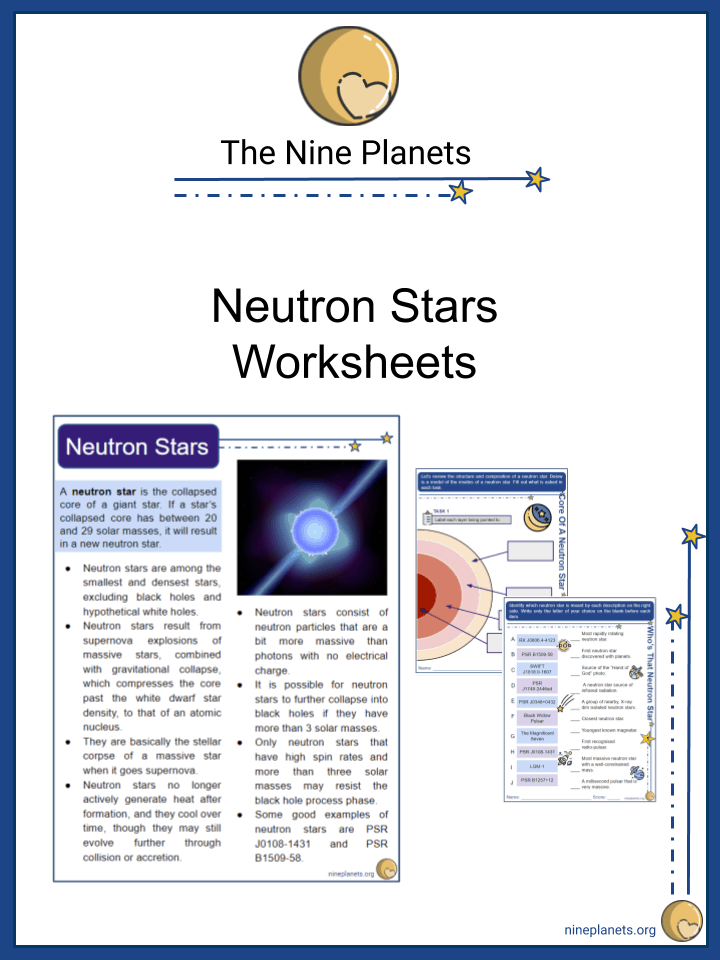 Any main-sequence star with an initial mass of above 8 solar masses, has the potential to become a neutron star. As the star evolves away from the main-sequence subsequent nuclear burning produces an iron-rich core.

When all nuclear fuel in the core is exhausted, the core must be supported by degeneracy pressure alone. Further deposits of mass from shell-burning causes the core to exceed the Chandrasekhar limit.

Temperatures continue to rise and thus electrons and photons combine to form neutrons via electron capture, releasing a flood of neutrinos.

When densities reach a critical state, a combination of strong force repulsion and neutron degeneracy pressure halts the contraction. The infalling outer envelope of a star is halted and flung outwards by a flux of neutrinos produced in the creation of the neutrons, becoming a supernova.

The stellar remnant which is left becomes a neutron star. If the star remnant has around 3 solar masses, it will further collapse to become a black hole.

Since now the star has only a tiny fraction of its former radius, it will have a high rotational speed, that will over time slow down. Some neutron stars have rotation periods from about 1.4 ms to 30 s.

It is believed that if a stellar remnant has more than 2.16 solar masses, it will overcome the strong force repulsion and neutron degeneracy pressure, and thus gravitational collapse will occur.

This will produce a black hole, however, the smallest observed mass of a stellar black hole is about 5 solar masses. Most of the light generated by a neutron star is emitted in X-rays.

Neutron stars are so dense, that a normal-sized matchbox containing neutron-star material would weigh about 3 billion tonnes, while the gravitational field on a neutron star’s surface is 200 billion times that of Earth’s.

The magnetic field strength on the surface of a neutron star ranges from around 104 to 1011 tesla. These are orders of magnitude higher than in any other object.

There are some variations in the magnetic field of neutron stars, and they are the most likely factor which allows for different types of neutron stars to be distinguished by their spectra and explains the periodicity of pulsars.

Most neutron stars are observed as pulsars. Pulsars are rotating neutron stars, that display pulsation of radiation at very regular intervals that range from milliseconds to seconds.

They have strong magnetic fields, which funnel jets of particles through their two magnetic poles.  These accelerated particles produce a very powerful beam of light, some might say that they look like lighthouses.

It is common for pulsars to not have their magnetic field aligned with their spin axis, thus the beams of particles and light are swept around as the star rotates. If the beam crosses our line-of-sight, we see a pulse.

Currently, there are around 2,000 known neutron stars detected in the Milky Way, and the Magellanic Clouds, the majority of which have been detected as radio pulsars.

Neutron stars are mostly concentrated along the disk of the Milky Way. Neutron stars have a prevalence of around 0.7% and are usually of spectral type D.

Though it seems counterintuitive, neutron stars can host planets. These exoplanets can be original, circumbinary, captured, or the result of the second round of planet formation.

These planets receive little visible light yet massive amounts of ionizing radiation and high-energy stellar wind. This makes them very hostile environments, and life is unlikely to develop on them.

Draugr is also the smallest exoplanet currently known, having twice the mass of the Moon. Another example would be the PSR B1620-26, where a circumbinary planet orbits a neutron star-white dwarf binary system.