Phobos (“FOH bus”) is the larger and innermost of Mars’ two moons. Phobos is closer to its primary than any other moon in the solar system, less than 6000 km above the surface of Mars. It is also one of the smallest moons in the solar system.

In Greek mythology, Phobos is one of the sons of Ares (Mars) and Aphrodite (Venus). “phobos” is Greek for “fear” (the root of “phobia”).

Phobos orbits Mars below the synchronous orbit radius. Thus it rises in the west, moves very rapidly across the sky and sets in the east, usually twice a day. It is so close to the surface that it cannot be seen above the horizon from all points on the surface of Mars.

And Phobos is doomed: because its orbit is below synchronous altitude tidal forces are lowering its orbit (current rate: about 1.8 meters per century). In about 50 million years it will either crash onto the surface of Mars or (more likely) break up into a ring. (This is the opposite effect to that operating to raise the orbit of the Moon.)

Phobos and Deimos may be composed of carbon-rich rock like C-type asteroids. But their densities are so low that they cannot be pure rock. They are more likely composed of a mixture of rock and ice. Both are heavily cratered. New images from Mars Global Surveyor indicate that Phobos is covered with a layer of fine dust about a meter thick, similar to the regolith on the Earth’s Moon.

The Soviet spacecraft Phobos 2 detected a faint but steady outgassing from Phobos. Unfortunately, Phobos 2 died before it could determine the nature of the material; water is the best bet. Phobos 2 also returned a few images (right).

The most prominent feature on Phobos is the large crater named Stickney, the maiden name of Hall’s wife (above). Like Mimas’ crater Herschel (on a smaller scale) the impact that created Stickney must have almost shattered Phobos. The grooves and streaks on the surface were probably also caused by the Stickney impact.

Phobos and Deimos are widely believed to be captured asteroids. There is some speculation that they originated in the outer solar system rather than in the main asteroid belt.

Phobos and Deimos may someday be useful as “space stations” from which to study Mars or as intermediate stops to and from the Martian surface; especially if the presence of ice is confirmed.

How was Phobos discovered?

Asaph Hall discovered Phobos in the United States Naval Observatory in Washington DC. It was found six days after its smaller sibling Deimos was found.

The astronomer used a 26-inch refractor to study the region around Mars. Studying closer to the red planet than any another scientist, he found the smaller moons orbiting the planet’s equator.

How did Phobos get its name?

Just like many planets and moons in our Solar System, the small satellite gets its name from Greek mythology. The moon is named after Phobos, the god of fear in Homer’s ancient poem, “The Iliad”. He is the son of Ares (Mars) and Aphrodite (Venus). 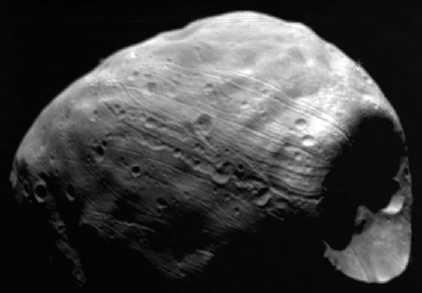