What is a Refracting Telescope?

Home » Space Questions » What is a Refracting Telescope?

Since the invention of telescopes astronomers have been able to see a considerable amount when gazing into the vastness of space. This includes the detail on the surfaces of close objects like the Moon and the planets. Telescopes also help us see many more stars than we can ever could with the naked eye.

In this article we will focus on refracting telescopes, although there are other types of telescopes such as reflecting.

When a wave such as light passes from one medium to another at an angle it changes direction. This is called refraction. A lens is a piece of glass designed to bend the light that passes through it in such a way that an image may be produced. A refracting telescope uses a combination of lenses to produce an image of a distant object, e.g. a star or planet.

A simple refracting telescope consists of two lenses, the Objective and the eyepiece. Basically the objective lens produces an image of a distant object at its focus and the eyepiece lens magnifies this image. We can represent this using a ray diagram which shows the path of imaginary rays of light passing through the telescope.

From the diagram above we can see that the distance between the lenses is the sum of the focal lengths of the two lenses.

e.g. a refracting telescope has an objective of focal length 70cm and eyepiece 5cm. Its magnification will be 70 / 5 = 14.

Star gazers usually have a selection of eyepieces at hand. You don’t always want an incredibly high magnification, e.g. when studying the Moon. When you want to observe a star you will often switch eyepieces. Less powerful to locate the star and more powerful to observe it closely. (eyepieces with smaller focal lengths are more powerful as they need to bend the light more).

This is a problem when using lenses. Different wavelengths of light refract by different amounts. Smaller wavelengths refract more than longer wavelengths. This is how a prism splits white light into the visible spectrum. 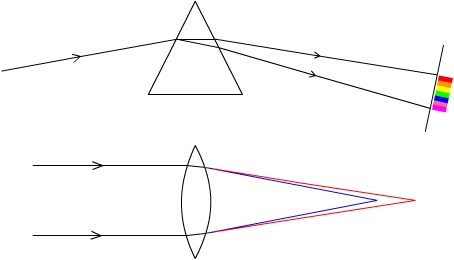 The result of this is that the edges of the image are blurred and coloured like fuzzy rainbows. One can get special lenses that have a special coating to reduce the amount of chromatic aberration but they are expensive.