Tethys ( “TEE this”  ) is the ninth of Saturn’s known satellites:

In Greek mythology Tethys was a Titaness and sea goddess who was both sister and wife of Oceanus.

Discovered by Cassini in 1684.

Tethys’ low density indicates that it is almost completely composed of water ice, similar to Dione and Rhea.

The western hemisphere is dominated by a huge impact crater, called Odysseus, whose 400 km diameter is nearly 2/5 of that of Tethys itself (right). That such an impact didn’t shatter Tethys completely indicates that it may have been liquid or at least not very solid at the time. The crater is now quite flat (or more precisely, it conforms to Tethys’ spherical shape), like the craters on Callisto, without the high ring mountains and central peaks commonly seen on the Moon and Mercury.

The second major feature seen on Tethys is a huge valley (called Ithaca Chasma) 100 km wide and 3 to 5 km deep which runs 2000 km or 3/4 of the way around Tethys’ circumference (above).

Clearly then, Tethys has not always been frozen solid. At some point in its past it was probably liquid. The impact craters from that era have been smoothed out. As it froze and expanded, the surface must have cracked to accommodate the extra volume producing Ithaca Chasma. The smaller impact craters we see today are more recent.

There are no albedo features on Tethys as there are on Rhea and Dione.

Telesto and Calypso orbit in Tethys’ Lagrange points (60 degrees ahead and behind Tethys in the same orbit).

In Greek mythology Telesto was a daughter of Oceanus and Tethys.

Discovered by Smith, Reitsema, Larson and Fountain in 1980 from ground-based observations.

Calypso (“ka LIP so”) is the eleventh of Saturn’s known satellites:

In Greek mythology Calypso was a sea nymph who delayed Odysseus on her island for seven years.

Discovered by Pascu, Seidelmann, Baum and Currie in 1980 from ground-based observations with prototype cameras destined for the HST.

Calypso and Telesto are among the smallest moons in the solar system.

More about Telesto and Calypso 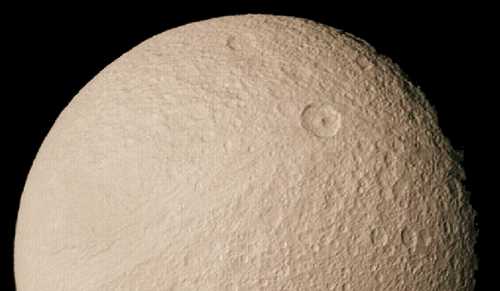