Titania is the Queen of the Fairies and wife of Oberon in Shakespeare’s Midsummer-Night’s Dream.

Discovered by Herschel in 1787.

Titania and Ariel appear quite similar though Ariel is 25% smaller. All of Uranus’ large moons are a mixture of about 40-50% water ice with the rest rock, a somewhat larger fraction of rock than Saturn’s large moons such as Rhea.

Titania’s surface is a mixture of cratered terrain and systems of interconnected valleys hundreds of kilometers long. Some of the craters appear to be half-submerged. Titania’s surface is clearly relatively young (though older than some such as Enceladus); obviously some sort of resurfacing processes have been at work.

One theory of Titania’s history is that it was once hot enough to be liquid. The surface probably cooled first; when the interior froze it expanded forcing the surface to crack and resulting in the valleys that we see today. 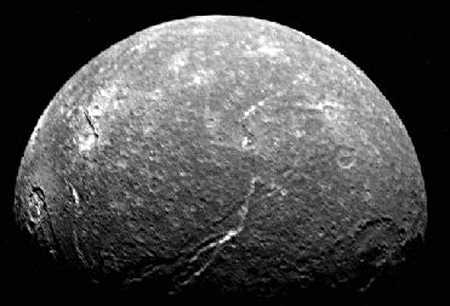