Umbriel (“UM bree el”) is the thirteenth of Uranus’s known satellites and the third largest:

Umbriel is a character in Alexander Pope’s The Rape of the Lock.

Discovered by Lassell in 1851.

Umbriel and Oberon appear quite similar though Oberon is 35% larger. All of Uranus’ large moons are a mixture of about 40-50% water ice with the rest rock, a somewhat larger fraction of rock than Saturn’s large moons such as Rhea.

Umbriel’s heavily cratered surface has probably been stable since its formation. It has far more and larger craters than do Ariel and Titania.

Umbriel is very dark; it reflects only about half as much light as Ariel, Uranus’ brightest satellite. 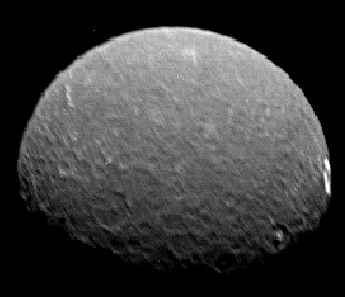