Ceres is the largest object in the asteroid belt, but was reclassified a dwarf planet in 2006 – even though it’s 14 times smaller than Pluto.

Ceres is a dwarf planet, and the only who isn’t located in the Kuiper Belt but rather in the inner solar system in the asteroid belt between the orbits of Mars and Jupiter. Discovered in 1801, it was considered a planet for a year, and then an asteroid, the first of its kind until 2006, when it was classified as of dwarf planet being the smallest of them.

In the search of a star, the Italian astronomer Giuseppe Piazzi stumbled in 1801 upon what he believed to be a comet. Later, with the help of another astronomer it was concluded that they found a new planet.

Piazzi decided to name it Ceres Ferdinandea. Soon, more and more similar objects were discovered in 1850 that then led to its classification as an asteroid, the first object to be termed so. The name then changed to Ceres after the roman goddess of harvest and motherly love.

Ceres is believed to have been formed around 4.5 billion years ago when the Solar System was forming. Gravity pulled swirling gas and dust and it resulted in the creation of the small dwarf planet. Ceres is described by scientists as an embryonic planet or proto planet, meaning that it started to form as a planet but failed to finish. The failure was guaranteed by Neptune’s strong gravity which prevented Ceres from becoming a fully formed planet.

Ceres settled into its current location among the rest of the leftover pieces of planetary formation. Another theory of its origin states that Ceres was actually formed within the Kuiper Belt before migrating closer to the Sun via various large gravitational influences.

This theory holds some weight due to the presence of ammonia salts detected in Ceres’s Occator crater. Also Ceres’s believed formation under colder conditions than most planets and asteroids lends some credibility to this theory, meaning that the dwarf planet was formed beyond Jupiter’s orbit.

Ceres has the radius of 476 kilometers or 296 miles. Thus Ceres is 1/13 the radius of Earth or 27% that of the Moon. The diameter of Ceres is estimated to be about 945 kilometers, meaning that Ceres is a comparative size to the top to bottom length of the United Kingdom.

It follows an orbit between Mars and Jupiter, within the asteroid belt and closer to the orbit of Mars. The orbit is moderately inclined, (i = 10.6° compared to 7° for Mercury and 17° for Pluto) and moderately eccentric (e = 0.08 compared to 0.09 for Mars).

It takes about 4.6 Earth years for Ceres to make one trip around the sun or approximately 1,681 Earth days. As Ceres orbits the sun, it completes one rotation every 9 hours, thus its day length, which is one of the shortest in the solar system.

Ceres is covered in countless small, young craters, no larger than 280 kilometers or 175 miles in diameter.  The dwarf planet is made up mostly from ice and rock, with a rocky interior and an icy exterior.

On the surface, ice mixes with various minerals, iron rich clay can also be found on the surface.  The surface is relatively warm for an asteroid, the average surface temperature is about 235 degrees Kelvin or minus 36 degrees Fahrenheit or minus 38 degrees Celsius.

In January 2014, water vapor was detected in several regions, and thus it was discovered that water vapor comprises more of Ceres’s external makeup than it was previously believed. It has been determined that this could be the result of outgassing or from a unique type of volcano called a cryovolcano.

The outgassing is a common feature of a comet. Internally, Ceres’s mantle which is about 100 kilometers thick could contain up to 200 million cubic kilometers of water, which is more than all the fresh water on Earth.

Its composition lends itself to the formation of life as we know it. Its prospects for life are positive and as such it has gathered our attention for further observations. In 2017 organic molecules were discovered on Ceres, the carbon-containing building blocks of life. These organics more importantly, appear to be native, likely forming on Ceres rather than arriving via asteroid or comet strikes.

Scientists were pleased with this discovery. However something a bit more well-known brings the discussion of life to the table, the famous bright spots that are seemingly a unique feature of Ceres. A year after detecting water vapor, NASA’s Dawn spacecraft went to observe Ceres and entered its orbit in 2015.

This was when the cratered surface of Ceres was discovered and two very distinct bright spots were observed leading to the speculation about a possible cryovolcanic origin which is a volcano that erupts volatiles such as water, ammonia or methane. In 2016, scientists from the Dawn team claimed in a science paper that a massive cryovolcano called Ahuna Mons is the strongest evidence yet, for the mysterious formations.

Later in 2016, Dawn found definite evidence of water molecules on the surface of Ceres. These factors coupled with Ceres’s 20% carbon mass could provide the right conditions for organic chemistry.

“Because Occator Crater holds some tantalizing clues about the conditions necessary for life to arise on other worlds, scientists are hoping to send a lander to further explore Ceres' most fascinating feature”, scientist Paul Schenk declared.

Dawn could only study Ceres from orbit, reaching a closest altitude of 22 miles (35 km), a spacecraft on the surface however, could learn more about the dwarf planet's composition by scooping a sample and analyzing it in situ, or inside the spacecraft itself. Currently though, no space agencies have plans to send another mission to Ceres, but that could change now that the Dawn mission has ended. 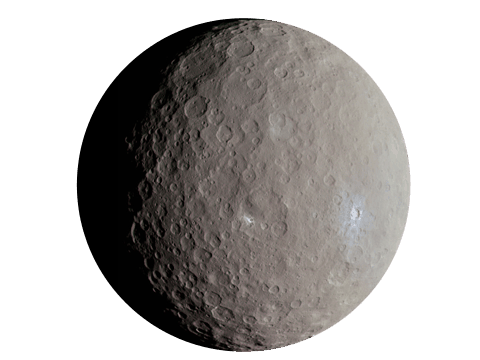