Eris is the same size as Pluto, but three times further from the Sun! It’s so far away, we don’t know much about this extremely cold and remote dwarf planet.

Eris is the most distant dwarf planet, located beyond the orbit of Neptune. It was discovered in 2005 and was originally classified as a planet. It is the second-largest dwarf planet discovered and it led to both it and Pluto’s demotion from planets to dwarf planets.

It was discovered by Mike Brown’s team while they were analyzing images taken in 2003. This discovery was publicly announced in 2005, and it caused problems because it was thought that Eris was bigger than Pluto, thus triggering the debate in the scientific community that led to the International Astronomical Union’s decision in 2006 to clarify the definition of a planet. Now both Pluto and Eris are termed dwarf planets.

Eris received an informal name, Xena, which was used internally by the discovery team. Supposedly the team had already saved this name to be used by the time a new object was discovered, that would be bigger than Pluto.

Many other names were then proposed and finally the name Eris was given in 2006. The reason for this is because the object was considered a planet for a long time and thus it deserved a name from the Greek or Roman mythology, like the other planets.

Since Eris is the goddess of strife and discord, it symbolically represented the discord in the astronomical community caused by the debate over the object’s and Pluto’s classification.

Eris is a member of a group of objects that orbit in a disc-like zone beyond the orbit of Neptune, called the Kuiper Belt. Although, Eris is the only dwarf planet that orbits even further than this.

This far away realm is populated with thousands of miniature icy worlds, which formed early in the history of our Solar System about 4.5 billion years ago.

Eris is about 68 AU away from the sun, and presently about 95.1 AU from the Earth. It takes about 13 hours for light to travel from Eris to us. These statistics constantly change but can be verified online since Eris is constantly tracked.  Eris has a radius of about 722 miles or 1,163 kilometers, and thus it’s about 1/5 the radius of Earth. Like Pluto, it is a bit smaller than our moon. If Earth were a nickel, Eris would be the size of a popcorn kernel. It has a diameter of about 2,326 kilometers or 1,445 miles.

It is slightly smaller than Pluto, though Eris is about 27% more massive and denser. However, new results from the New Horizons mission revealed that Pluto’s volume was not slightly smaller, but actually slightly larger than Eris. With this new information, Eris has been placed as the tenth-largest object known to orbit the sun by volume, but it remains the ninth-largest by mass.

It takes about 558 Earth years for Eris to make one trip around the Sun. As it orbits the Sun, it completes one rotation every 25.9 hours. Its maximum distance or aphelion, from the Sun, is about 97.65 AU while its closest or its perihelion is about 37.91 AU.

It came to its aphelion around the year 1977, and it will reach its perihelion in the year 2256. Its orbit pattern can be classified as highly eccentric. Its orbit avoids direct interaction with Neptune’s orbit, never crossing it. Eris’s orbit is highly inclined, tilted at an angle of about 44 degrees to the ecliptic. It is estimated that in about 800 years, Eris will be closer to the Sun than Pluto, at least for a period of time.

Eris has an estimated albedo of 0.96, higher than any other large body in the Solar System except for the sixth-largest moon of Saturn, Enceladus. The reason for its high albedo is speculated to be due to its surface ices that are replenished because of temperature fluctuations as Eris’s eccentric orbit takes it closer and father from the Sun.

Since it has a density of 2.52±0.07 g/cm3, it is believed that it is largely composed of rocky materials. Internal heating via radioactive decay suggests that Eris could have an internal ocean of liquid water at the mantle-core boundary.

The presence of methane ice indicates that its surface is very similar to that of Pluto and of Neptune’s largest moon Triton. Its eccentric orbit is also one of the factors that make its surface temperature between about −243.2 and −217.2 °C. Though Pluto and Triton have reddish parts on their surface, Eris appears almost white.

Eris is about three times farther away from the Sun then Pluto. Regardless, it approaches close enough to the sun that some of the ices on the surface might warm enough to sublime.

Because methane is highly volatile, its presence shows either that Eris has always resided in the distant reaches of the Solar System, where it is cold enough for methane ice to persist, or that the celestial body has an internal source of methane to replenish gas that escapes from its atmosphere.

Eris has one known satellite, a moon that was discovered in 2005, and was named Dysnomia, after the daughter of the goddess Eris.

By the time of its discovery, Eris still had the nickname Xena, after a warrior princess in a TV show. The princesses’ sidekick was named Gabrielle, and thus the moon was nicknamed after the sidekick. However, since the IAU officially decided to name the dwarf planet Eris, its satellite’s name also had to be changed and thus received the name Dysnomia.

Dysnomia is the second known largest moon of a dwarf planet. The first place is held by Pluto’s moon Charon. It was discovered after the adaptive optics team in Hawaii carried out observations using a newly commissioned laser guide star adaptive optics system. It is believed to have been formed after a collision.

Due to extreme cold temperatures, it seems unlikely that life could exist there.

Using Jupiter’s gravity assist, it could take approximately 24 years to reach Eris. Since the mission to Pluto was a success, multiple studies arose for follow-on missions to deeper explore the Kuiper belt, Eris was evaluated among the candidates. However, there are no clear missions stated to take place, yet. 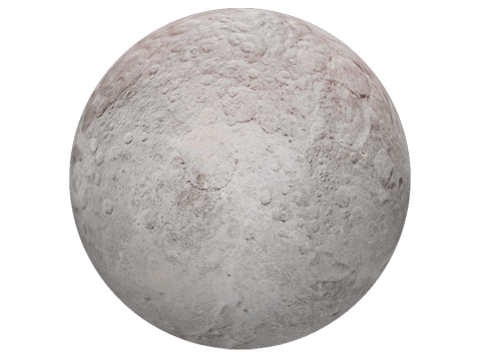