Asteroids are small, rocky, debris left over from the formation of our solar system around 4.6 billion years ago. There are currently over 822,000 known asteroids.

On the first day of January 1801, Giuseppe Piazzi discovered an object which he first thought was a new comet. But after its orbit was better determined it was clear that it was not a comet but more like a small planet. Piazzi named it Ceres, after the Sicilian goddess of grain. Three other small bodies were discovered in the next few years (Pallas, Vesta, and Juno). By the end of the 19th century, there were several hundred.

Several hundred thousand asteroids have been discovered and given provisional designations so far. Thousands more are discovered each year. There are undoubtedly hundreds of thousands more that are too small to be seen from the Earth. There are 26 known asteroids larger than 200 km in diameter. Our census of the largest ones is now fairly complete: we probably know 99% of the asteroids larger than 100 km in diameter. Of those in the 10 to 100 km range we have cataloged about half. But we know very few of the smaller ones; there are probably considerably more than a million asteroids in the 1 km range.

The total mass of all the asteroids is less than that of the Moon.

11 comets and asteroids have been explored by spacecraft so far, as follows: ICE flyby of Comet Giacobini-Zinner. Multiple flyby missions to Comet Halley. Giotto (retarget) to Comet Grigg-Skellerup. Galileo flybys of asteroids Gaspra and Ida (and Ida satellite Dactyl). NEAR-Shoemaker flyby of asteroid Mathilde on the way to orbit and land on Eros. DS-1 flybys of asteroid Braille and Comet Borrelly. Stardust flyby of asteroid Annefrank and recent sample collection from Comet Wild 2. For future we can expect: Hayabusa (MUSES-C) to asteroid Itokawa, Rosetta to Comet Churyumov-Gerasmenko, Deep Impact to Comet Tempel 1, and Dawn to orbit asteroids Vesta and Ceres.

243 Ida and 951 Gaspra were photographed by the Galileo spacecraft on its way to Jupiter. The NEAR mission flew by 253 Mathilde (left) on 1997 June 27 returning many images. NEAR (now renamed "NEAR-Shoemaker") entered orbit around 433 Eros (right) in January 1999 and returned a wealth of images and data. At the end of its mission it actually landed on Eros.

The largest asteroid by far is 1 Ceres. It is 974 km in diameter and contains about 25% of the mass of all the asteroids combined. The next largest are 2 Pallas, 4 Vesta and 10 Hygiea which are between 400 and 525 km in diameter. All other known asteroids are less than 340 km across.

There is some debate as to the classification of asteroids, comets and moons. There are many planetary satellites that are probably better thought of as captured asteroids. Mars's tiny moons Deimos and Phobos, Jupiter's outer eight moons, Saturn's outermost moon, Phoebe, and perhaps some of the newly discovered moons of Saturn, Uranus and Neptune are all more similar to asteroids than to the larger moons. (The composite image at the top of this page shows Ida, Gaspra, Deimos and Phobos approximately to scale.)

Asteroids are classified into a number of types according to their spectra (and hence their chemical composition) and albedo:

Because of biases involved in the observations (e.g. the dark C-types are harder to see), the percentages above may not be representative of the true distribution of asteroids. (There are actually several classification schemes in use today.)

There is little data about the densities of asteroids. But by sensing the Doppler effect on radio waves returning to Earth from NEAR owing to the (very slight) gravitational tug between asteroid and spacecraft, Mathilde's mass could be estimated. Surprisingly, its density turns out to be not much greater than that of water, suggesting that it is not a solid object but rather a compacted pile of debris.

Asteroids are also categorized by their position in the solar system:

Between the main concentrations of asteroids in the Main Belt are relatively empty regions known as the Kirkwood gaps. These are regions where an object's orbital period would be a simple fraction of that of Jupiter. An object in such an orbit is very likely to be accelerated by Jupiter into a different orbit.

There also a few "asteroids" (designated as "Centaurs") in the outer solar system: 2060 Chiron (aka 95 P/Chiron) orbits between Saturn and Uranus; the orbit of 5335 Damocles ranges from near Mars to beyond Uranus; 5145 Pholus orbits from Saturn to past Neptune. There are probably many more, but such planet-crossing orbits are unstable and they are likely to be perturbed in the future. The composition of these objects is probably more like that of comets or the Kuiper Belt objects than that of ordinary asteroids. In particular, Chiron is now classified as a comet.

4Vesta has been studied recently with HST (left). It is a particularly interesting asteroid in that it seems to have been differentiated into layers like the terrestrial planets. This implies some internal heat source in addition to the heat released by long-lived radio-isotopes which alone would be insufficient to melt such a small object. There is also a gigantic impact basin so deep that it exposes the mantle beneath Vesta's outer crust.

Though they are never visible with the unaided eye, many asteroids are visible with binoculars or a small telescope.

A few asteroids and comets are listed below for comparison. (distance is the mean distance to the Sun in thousands of kilometers; masses in kilograms).

Photo of an Asteroid 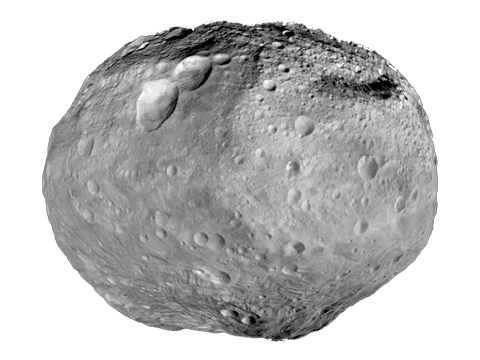