433 Eros is an S-type asteroid orbiting the Sun mostly between the orbits of Earth and Mars.

Eros was the Greek god of love and desire.

At a press conference on February 17, 2000, mission scientists for the Near Earth Asteroid Rendezvous mission exuded the air of kids in a candy shop as they discussed the latest results from asteroid Eros. After less than a week in orbit, NEAR has already returned dazzling pictures that have surprised and delighted researchers.

“At first I was stunned speechless by the beauty of this asteroidal landscape,” said Mark Robinson, a member of the NEAR imaging team from Northwestern University. “Once I got over that, the geology took over.” The first images from NEAR showed that Eros has an ancient surface covered with craters, grooves, layers, house-sized boulders and other complex features. “This is not just another rock floating out in space,” continued Robinson. “There’s a lot of neat geology going on.” “There are tantalizing hints that the asteroid has a layered structure, like a sheet of plywood.” said Andrew Cheng, of the Applied Physics Laboratory at Johns Hopkins University, who serves as the NEAR mission’s lead scientist. “These layers appear to be very flat and appear to run end-to-end. This could come about if Eros was once part of a larger body, perhaps a fragment of a planet.”

This idea fits the general picture that scientists have of asteroids. Most are concentrated in a belt between the orbits of Mars and Jupiter. Asteroids are likely to be leftover pieces of a planet that tried to form 4.6 billion years ago when the solar system was young, but couldn’t because of nearby Jupiter’s disruptive gravitational field. Eros might be a fragment from a planetoid that coalesced long ago and later broke apart as a result of collisions with other asteroids. With NEAR in orbit, scientists now know that Eros’s density is 2.4 grams per cubic centimeter — about the same as the density of Earth’s crust.

“With this new data, it now looks like we have a fairly solid object,” says radio science team leader Dr. Donald Yeomans of NASA’s Jet Propulsion Laboratory in Pasadena, CA. “There is no strong evidence that it’s a rubble pile like Mathilde,” the large asteroid NEAR passed and photographed in 1997, and which we just talked about.

Eros has a giant gouge which was of interest. Here’s a close-up image.

Inside Eros’ Giant Gouge This picture was taken from NEAR on February 15, 2000, while the spacecraft was passing directly over the large gouge that creates Eros’s characteristic peanut shape. It is a mosaic of individual images showing features as small as 120 feet (35 meters) across. Although most of the asteroid is in shadow, we are able to see inside the gouge. Many narrow parallel troughs closely follow the shape of the gouge. Although they appear curvilinear from this view, they are most likely oriented parallel to the length of the asteroid. The strong lighting contrast along the terminator (the line separating day from night on Eros) makes it easy to see that most of the surface is saturated with impact craters. Inside the gouge, however, only smaller craters are present, indicating that the area within the gouge is younger than the surface along the terminator. This implies that the event that caused the gouge must have happened more recently than the formation of the rest of the surface of Eros.

But that was not the end of the NEAR mission. NEAR, then renamed NEAR-Shoemaker (after Gene Shoemaker) On Monday, 12 February 2001, the NEAR spacecraft touched down (yes, landed) on asteroid Eros, after transmitting 69 close-up images of the surface during its final descent. This was the first time humans landed a spacecraft on an asteroid! Watching that event was the most exciting experience of several asteronomer’s lives.

Here is one of the final images:

The landing was a gentle one, cruising to the asteroid’s surface at less than 4 mph. Afterwards the NEAR Shoemaker spacecraft was still communicating with the NEAR team at the Johns Hopkins University Applied Physics Laboratory (APL) in Laurel, Md.

And here is the final image:

This last image snapped by NEAR Shoemaker was only 394 feet (120 meters) from the asteroid’s surface and covered a 20-foot (6-meter) area. NEAR Shoemaker continued to send a signal to Earth, assuring the team that it had landed gently. The signal was identified by radar science data, and about an hour later was locked onto by NASA’s Deep Space Network antennas, which continued to monitor the spacecraft 196 million miles from Earth. Later, NASA has given the go-ahead for the NEAR mission to collect data from the surface of Eros through Feb. 28 2001 tacking four days onto an extension granted after the NEAR Shoemaker spacecraft’s historic landing on the asteroid last week. The extension gives NEAR Shoemaker’s gamma-ray spectrometer additional time to observe the elemental composition on and below Eros’ surface, and the NEAR team at least two more opportunities to download this information through NASA’s heavily used Deep Space Network of antennas. 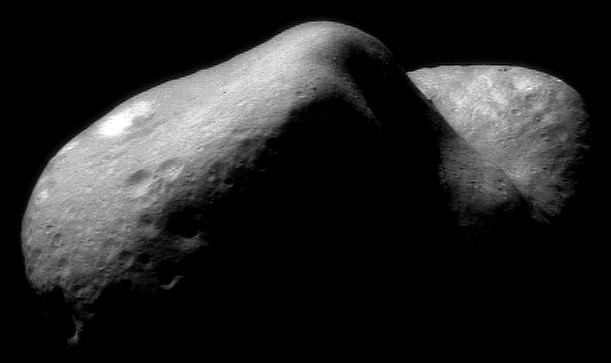