The asteroid belt is located between the inner and the outer planets and is home to thousands of rocks and debris known as asteroids and some of the dwarf planets. All of these orbit the Sun.

Some asteroids do orbit in space near to Earth and some are forced out of the asteroid belt by gravity and sent towards the outer solar system instead.

What Exactly Is The Asteroid Belt?

There are hundreds of thousands of asteroids in the asteroid belt, but almost half of the entire mass is made up of just four objects. These objects are the dwarf planet Ceres, and three other asteroids called Vesta, Pallas and Hygiea.

The diameters of Vesta, Pallas and Hygiea are over 400km and Ceres is even bigger at 950km diameter.

How Far Away Is The Asteroid Belt?

The asteroid belt is between the planets Mars and Jupiter. It is located about 2.2 to 3.2 Astronomical Units (AU) from the Sun. That is somewhere between 329-478 million km away.

Interesting Facts About The Asteroid Belt

Picture of the Asteroid Belt 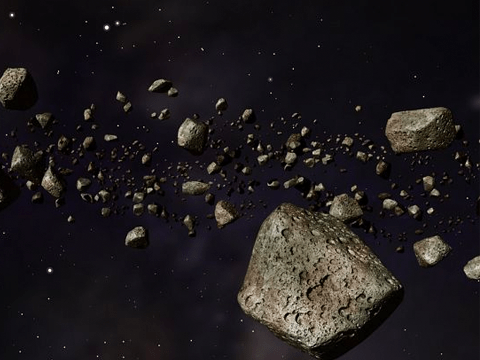