Mars is the fourth planet from the Sun and the second-smallest planet with a thin atmosphere, having the surface features reminiscent both of the impact craters of the Moon, and the valleys, deserts and polar ice caps of Earth. It is the most widely searched planet for life.

Mars has been observed by many different cultures from around the world since hundreds of years. Because of this it is impossible to credit anyone with its discovery, Mars being easily visible with the naked eye.

Observations date back to ancient Egyptian astronomers in the 2nd millennium BCE while Chinese records about the motions of Mars appeared before the founding of the Zhou Dynasty in 1045 BCE.

Detailed observations were made even by the Babylonians who developed arithmetic techniques to predict the future position of the planet while the ancient Greeks developed a geocentric model to explain the planets motions.

To the ancient Romans, the planet Mars was symbolic of blood and war, the equivalent of the Greek god of war Aries. In the 16th century, Nicolaus Copernicus proposed a heliocentric model for the Solar System in which the planets follow circular orbits around the Sun.

Johannes Kepler revised this creation, yielding an elliptic orbit for Mars that more accurately fitted the observational data. In 1610, Galileo Galilei first observed Mars with a telescope and within a century, astronomers discovered several features of Mars and determined the planet’s rotational period and axial tilt.

The idea of life on Mars started a long time ago, and in a way this helped fuel the drive for searching it upon Mars. Since 1877 onward, it was mistakenly thought that water was found on Mars and later the idea of life became popularized among the public.

Percival Lowell believed he could see a network of canals on Mars but they were proved to be optical illusions. Since then, many more details about the planet were gathered both exciting and disappointing, and the presence of today’s robots on the planet are a testament of the will of the people who wish to finally find a trace of life on Mars, even if it means finding evidence of past life.

It is hypothesized that the Solar System formed from a giant rotating ball of gas and dust known as the pre-solar nebula. Much of it formed the Sun while more of its dust went on and merged to create the first proto-planets. Mars was one of these planets and after the gravity pulled enough swirling gas and dust, it became the fourth planet from the Sun.

In a way, its diameter is about the width of the continent of Africa. Mars’s mass is 6.42 x 1023 kilograms, about 10 times less than Earth and a volume of 1.6318 x 10¹¹ km³ (163 billion cubic kilometers) which is the equivalent of 0.151 Earths. Its entire surface area is similar to that of all the Earth’s continents combined

It is believed that the closest distance between Earth and Mars will continue to mildly decrease for the next 25.000 years.

Mars’s axis of rotation is tilted 25.2 degrees similar to Earth which has an axial tilt of 23.4 degrees. It has seasons though they last longer than on Earth since Mars takes longer to orbit the Sun. The seasons vary in length due to Mars’s elliptical, egg-shaped orbit around the Sun.

It is estimated that Mars has a dense core with a radius between 930-1.300 miles / 1.500 – 2.100 kilometers. It is made up primarily of iron and nickel with about 16-17% sulfur. The iron sulfide core is thought to be twice as rich in lighter elements then Earth’s core.

The core is surrounded by a silicate mantle which formed many tectonic plates and volcanic features on the planet that now appear to be dormant.

Besides silicon and oxygen, the most abundant elements in Martian crust are iron, magnesium, aluminum, calcium and potassium, an average thickness of the planet’s crust has been estimated to be about 50 km / 31 mi, with a maximum thickness of 125 km / 78 mi. In comparison, Earth’s average crust is about 40 km / 25 mi.

It is estimated that Mars lost its magnetosphere around 4 billion years ago. A possible reason for this is because of numerous asteroid strikes and the solar wind interacting directly with the Martian ionosphere, lowering the atmospheric density by stripping away atoms from the outer layer.

The atmosphere of Mars consists of about 96% carbon dioxide, 1.93% argon and 1.89% nitrogen, along with traces of oxygen and water. It is quite dusty. Recently methane has also been detected in the atmosphere, values of which indicate an active source of gas that should be present be it biological or non-biological.

If Mars had an Earth-like orbit, its seasons would be similar to Earth's because its axial tilt is similar to Earth's. Spring in the northern hemisphere (autumn in the southern) is the longest season lasting 194 days. Autumn in the northern hemisphere (spring in the southern) is the shortest at 142 days. Northern winter (southern summer) lasts 154 days while northern summer (southern winter) lasts 178 days.

On average, the temperature on Mars is about -80 degrees Fahrenheit / -60 degrees Celsius. In winter, near the poles temperatures can get down to -195 degrees F / -125 degrees C. Mars has the largest dust storms in the Solar System, reaching speeds of over 160 km/h (100 mph). These can vary from a storm over a small area, to gigantic storms that cover the entire planet. They tend to occur when Mars is closest to the Sun, increasing global temperature.

Though it is often referred to as the Red Planet, Mars actually has many colors. At the surface colors such as brown, gold and tan are present. Its surface is the same size as Earth’s dry lands combined, even though it is two times smaller.

Mars has many evidences of a watery past, with ancient river valley networks, deltas and lakebeds, as well as rocks and minerals on the surface that could only have formed in liquid water. Some features suggest that Mars experienced huge floods about 3.5 billion years ago.

Though liquid water cannot exist on the surface of Mars due to low atmospheric pressure, which is less than 1% that of Earth’s, except for short periods, the volume of water ice caps appear to be made largely out of water with a volume of water ice enough to cover, if melted, the entire planetary surface to a depth of 11 meters or 36 ft.

There are landforms visible that strongly suggest that liquid water has existed on the planet’s surface like hematite concretions (image above), or the Ma’adim Vallis, a valley of about 700 km / 430 mi thought to have been carved by flowing water long ago.

There are two permanent polar ice caps on Mars. During winter, the pole’s lay in continuous darkness and causing depositions of 25-30% of the atmosphere into slabs of carbon dioxide dry ice.

When they are exposed again to sunlight the carbon dioxide sublimates and sometimes create water-ice clouds. Both polar caps consist primarily of water ice, about 70%.

The dichotomy of Martian topography is striking, northern plains flattened by lava flows contrast with the southern highlands, pitted and cratered by ancient impacts.

Mars is scarred by a number of impact craters: a total of 43,000 craters with a diameter of 5 km (3.1 mi) or greater have been found. The largest confirmed of these is the Hellas impact basin, a light albedo feature clearly visible from Earth.

The volcano Olympus Mons, is an extinct volcano in the vast upland region Tharsis, which contains several other large volcanoes. Olympus Mons is however the greatest, in fact it is the largest volcanoe detected in the entire Solar System, it has about three times the height of Mount Everest.

It is 10 times longer and 10 times wider than the Grand Canyon. Mars also has sand on its surface, made up from basaltic rock, thus having a grey color.

When the wind blows, dunes are created including series of parallel ridges in crater floors, also horseshoe-shaped dunes are created. Mars also has dust devils, towering vortices of wind similar to tornadoes. When the dust devils blow the red dust around on the greyish basaltic plains, they can leave behind complex and beautiful curlicues.

Mars actually has avalanches. Cliffs towering above the surface that hold different materials can be dislodged in the spring when carbon dioxide thaws, creating tremendous cascades of rock and dust.

Mars has only 2 known moons named Phobos and Deimos after the horses that pulled the chariot of the god of war Mars. They are very small though, Phobos has a diameter of about 25 km or 15.5 mi, while Deimos just 15 km or 9.3 mi. They look very much like asteroids and it is strongly believed that they have been captured by Mars gravity from the nearby asteroid belt.

Phobos orbits Mars only 6.000 km or 3.728 mi over the surface, moving so rapidly in its orbit that it orbits faster than Mars rotates. Tides from Mars are also altering its orbit, slowly lowering Phobos closer and closer to the surface. It is believed that in a few million years Phobos will drop low enough that it will actually enter the atmosphere and impact the surface.

On June 7, 2018, NASA announced that the Curiosity rover had discovered organic compounds in sedimentary rocks dating to three billion years old, indicating that some of the building blocks for life were present.

In July 2018, scientists reported the discovery of a sub-glacial lake on Mars, the first known stable body of water on the planet. It sits 1.5 km (0.9 mi) below the surface at the base of the southern polar ice cap and is about 20 km (12 mi) wide. Out of all the planets in the Solar System, Mars appears to have the highest change of having life forms but still the conditions are harsh enough that nothing should be able to survive there, perhaps only beneath the surface.

Still, regardless of its habitability now, Mars was definitely once a planet filled with oceans and the right conditions of life. Most people would be happy if we could only find evidence of life that may have existed on the Red Planet.

Future astrobiology missions are planned, including the Mars 2020 and Rosalind Franklin rovers. They have the mission to take soil samples and return them to Earth for further analysis. If we look into Mars’s history, it is one of the most actively observed planets in the Solar System and chances are it will remain so for a long time.

There are many plans for Mars, including terraforming and sending people on it, but it remains to be seen, hopes are high and missions continue.

- Mars is the most intensely studied planet with observations dating back to 4.000 years ago.

- It is about 50% farther from the Sun than Earth.

- Perhaps second only to Venus when it comes to “visits”, Mars has been visited over 16 times over about 39 attempts with the first successful mission happening in 1965 with the Mariner 4 spacecraft flyby.

- Mars is the outermost terrestrial planet, outside Earth’s orbit.

- Theoretically, Mars is populated by robots since we sent so many there.

- Mars has captured our imagination so much, that it has spanned countless adaptations on TV, literature and it may as well be the most popular planet after Earth.

- On Mars the Sun appears about half the size as it does on Earth.

- Pieces of Mars have fallen to Earth. Scientists have found tiny traces of Martian atmosphere within meteorites violently ejected from Mars, then orbiting the solar system amongst galactic debris for millions of years, before crash landing on Earth.

- A year on Mars is almost twice as long as a year on Earth.

- It would take more than six Mars to fill the volume of Earth.

- Almost 7 million Mars can fit in the Sun.

- The Mars One project hopes to colonize the Red Planet, beginning in 2022. 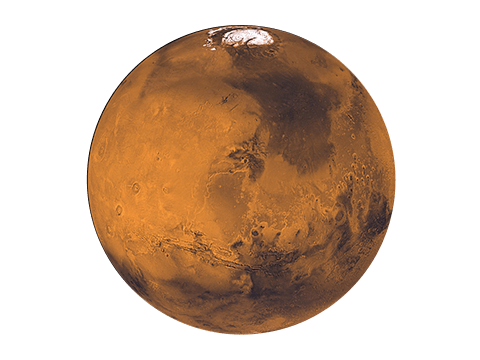