Haumea lives in the Kuiper belt and is about the same size as Pluto. It spins very fast, which distorts its shape, making it look like a football.

Haumea is the fastest rotating dwarf planet with the most interesting/controversial shape. It is located beyond the orbit of Neptune. It was discovered in 2004 and is the fourth largest dwarf planet.

Mike Brown’s team first nicknamed the object “Santa” among themselves, since it was discovered just after Christmas time in 2004. However, since they did not publicly announced the discovery, the other team from Spain were first to file a claim for it in 2005.

After disputes were resolved, the IAU gave credit to the Spanish team. However, Brown’s team proposed name for the object was the one who got accepted.

Haumea is member of the group of objects that orbit in a disc-like zone beyond the orbit of Neptune, called the Kuiper Belt. These objects are called trans-Neptunian objects or plutoids and it is believed to have formed in the early history of our Solar System about 4.5 billion years ago. Haumea or the Haumean family is the only identified trans-Neptunian collisional family.

Detailed studies of the visible and near infrared spectrum show it is a homogenous surface covered by a mixture of amorphous and crystalline ice, and about 8% organics. The presence of so much ice suggests that Haumea suffered a collisional event about 100 million years ago giving it its current shape. Haumea lost about 20% of its mass during this collision and it is believed that a second collision occurred and thus the moons of Haumea were created.

It is about 35 AU away from the Sun at its perihelion, while at its aphelion point, about 50 AU away. In relation to Earth it is currently 51.2 AU away while its light is reflected back at us in about 7 hours.

Haumea has a radius of about 385 miles or 620 kilometers, it is about 1/14 the radius of Earth, like a sesame seed compared to a nickel. It has a diameter of about 1,632 kilometers or 1014 miles, three Haumeas can fit side by side into Earth.

Haumea represents 28% the mass of the plutonian system and about 6% that of Earth’s moon. However it is believed that the dwarf planet lost about 20% of its mass during a collision.

It takes around 284 Earth years for Haumea to make a trip around the Sun. While orbiting the Sun, it completes one rotation every 4 hours. The speed of Haumea’s rotation is extremely fast, almost unnatural, and it is believed that this is due to its collision that happened many years ago.

It has a visual magnitude of 17.3 making it the third brightest object in the Kuiper belt after Pluto and Makemake. Thus it is easily observable with a large amateur telescope.

Spectral analysis showed that Haumea is coated in strong crystalline water ice, similar to the surface of Pluto’s moon Charon. A peculiarity since crystalline ice forms at temperatures above 110 K while Haumea’s surface temperature is below 50 K which is favorable for amorphous ice to be formed. As a result it is believed that Haumea is made up entirely out of rock covered by a thin icy shell.

It is also one of the densest Kuiper belt objects, with a density of 1.885 grams per cubic centimeter thus covering the values for silicate minerals such as olivine and pyroxene. One of the dwarf planet’s features is a dark red spot on its surface, which may be an impact crater revealing the interior of Haumea. The rest of the object is as white as snow due to its brightness, with an albedo in the range or 0.6-0.8, consistent with crystalline ice.

Two moons were discovered by Darin Ragozzine and Michel Brown in 2005. It is believed that both moons are fragments of Haumea.

Was first nicknamed “Rudolf” by the Caltech team and discovered in January 26, 2005. It is the bigger moon at roughly 310 kilometers in diameter. It is also brighter than Namaka. It orbits Haumea in a nearly circular path every 49 days. Infrared spectrum analysis determined that it is also covered with pure crystalline ice.

It was first nicknamed “Blitzen” and it was discovered on June 30 2005. Namaka is the smaller, inner satellite of Haumea, being a tenth of the mass of Hi’iaka. It orbits Haumea in 18 days in a highly elliptical, non-Keplerian orbit. At present, the orbits of Haumean moons appear almost exactly edge-on Earth, with Namaka periodically hiding-occulting, Haumea.

The ring was discovered in 2017 after a stellar occultation occurred. The ring has a width of approximately 70 kilometers or 40 miles wide, an opacity of 0.5, and is at a radius of 2,287 kilometers from the dwarf planet. The ring is in the same plane with Haumea’s equator and the orbit of its smaller moon Hi’iaka.

Particles in the ring are about in a 3:1 resonance with Haumea’s rotation. Ring particles make one revolution for every three times Haumea rotates. Haumea is the only known dwarf planet to have a ring. It is also the most distant object of the known Solar System to possess one.

The average temperature of Haumea is about -402 degrees Fahrenheit or -241 degrees Celsius. It is highly improbable for life as we know it to occur there among other detrimental factors.

A flyby mission to Haumea is estimated to take about 14.25 years using a Jupiter gravity assist, based on a launch date of 2025. However, there are no confirmed missions to Haumea. Though its rare and unique features are strong points in making a trip happen. 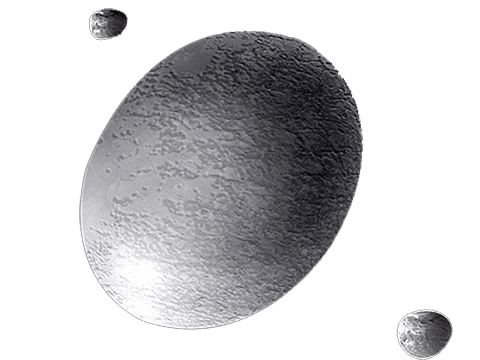