Who invented the telescope?

Many people believe that Galileo Galilei was the first astronomer to invent and build the telescope; however, the first telescope was made by Hans Lippershey in the early 1600s. Lipperhey was a German-Dutch glass maker, and he managed to reduce the amount of light in his telescope while focusing it. His model inspired other scientists to work on perfecting the telescope.

It is easy to point to Hans Lipperhey as the inventor of the telescope, but the history of its invention is chaotic and confusing. Historians and scientists today still argue about who invented the telescope. Let’s take a look at the telescope and its impact on scientific history.

What is the History of the Telescope?

The telescope traces back to early makers of eyeglasses and lenses. In the 1400s, glasses were used widely across Europe. These lenses were not powerful, not polished, and not clear. Due to their imperfections, they were not useful for astronomic observation.

By the end of the 1500s and early 1600s, lens makers improved their abilities to cut and polish glasses. It was at this time that Hans Lippershey, who made spectacles in the Netherlands, began experimenting with lenses.

In September of 1608, Lipperhey took his telescope to Prince Maurice of Nassau. A week later, Lipperhey applied to patent his new device. Other scientists and glass-makers came forward to claim that they had made similar devices; Lipperhey was denied his patent because of the claims.

The telescope spread across Europe after Lipperhey. By the end of May in 1609, the telescope could easily be found and purchased in large cities like Paris. Galileo picked up Lipperhey’s telescope and began to improve it. Galileo’s telescope was the first to be used for space observation.

Early telescopes looked similar. The first telescopes consisted of long tubes with one or several cylindrical sections. The tube could be made of tin, lead, cardboard, and wood held together by copper, cloth, or leather ties and/or glue. Polished lenses and mirrors were placed inside the tubes to magnify images and reflect light. 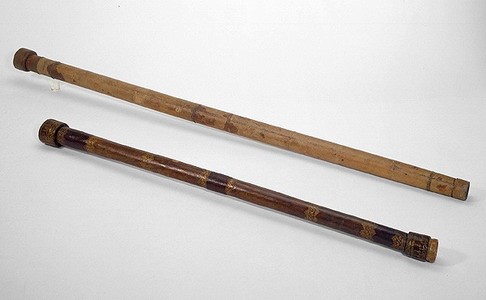 Credit: Museo Galileo, Institute and Museum of the History of Science

What Were the Major Problems with Early Telescopes?

Galileo’s telescope, along with others built during the 1600s, had serious problems. Early telescopes were exceptionally small in size and had a limited viewing range. It was nearly impossible to see objects further away.

Earlier telescopes did not have a fixed place for the eye, meaning the images that appeared in the telescope would move out of sight or out of focus. The smaller sizes also led to chromatic aberrations, meaning the telescope could not bring the colors of the object into focus or alignment.

Where did the Word Telescope Come From?

The word ‘telescope’ comes from the Italian word telescopio, which appeared in the early 1600s. Telescope appeared in a letter from Frederico Cesi to Galileo in August 1611. Galileo’s letters show that he used the term after Cesi. The English form ‘telescope’ appeared in 1650. We still use this form in English today.

Did the Telescope Have a Major Impact on Science?

The increasing power of the telescope gives us a clear understanding of patterns in planetary movements. In fact, Galileo first saw Jupiter’s moons and their movements through his telescope, registering these moons as satellites. They were the first objects in space recognized as orbiting another object.

Telescopes have allowed us to see into and study the depths of space, but they have also given us the opportunity to examine our own planet. Modern telescopes can detect heat waves, x-rays, and radio waves. Telescopes demonstrate how our planet interacts with others, and they can illustrate the properties of gravity and physics.

More recently, telescopes have allowed us to examine galaxies with planetary systems similar to our own. In fact, scientists are currently using telescopes to study planets with similar sizes and compositions to our own. We may be able to pinpoint planets in habitable zones, which are planets with conditions that could sustain life.

What Are Some Modern or Well-Known Telescopes?

The Hubble Space Telescope is perhaps the most well-known of the modern telescopes. The Hubble is 13.2 meters long and has a 4.2-meter diameter. It launched in 1990, and it has completed more than 1.3 million observations since that launch. Its battery capacity is similar to the capacity of 22 car batteries added together.

NASA is currently constructing the James Webb Space Telescope, which should be launched in 2021. The Webb will primarily act as an infrared telescope. The mirror in the Webb is comprised of 18 different segments that fold and adjust. To protect it from the sun, the telescope has a shield with five layers, each the size of a tennis court

In 2008, a conference was held at the European Space Agency/European Space Research and Technology Center (located in Noordwijk, Netherlands) to celebrate the 400th anniversary of Hans Lipperhey’s patent for his ‘telescope.’ Astronomers, historians, and the public were invited to the ESTEC conference center to discuss the history of telescopes, telescope technologies, politics surrounding the telescope, and the future of instrument technologies.

Part of the celebration included a visit to the Leiden Museum Boerhaave-National Museum of the History of Science and Medicine. Part of the reception included a dinner cruise that traveled from Katwijk to Leiden from the Rhine river to the Kagerplassen.

How Can I Learn More about the Telescope?

There are several books that cover the history of astronomy. One is The History of the Telescope, written by Henry King and published by Dover Books. This book is a good start to learn about history, but the history in the book does end around 1950.

To supplement Dover’s book, Geoff Andersen gives a good account of the telescope in The Telescope: Its History, Technology, and Future (Princeton University Press, 2007). The organization of the book may seem confusing, but Andersen provides credible information. Andersen’s writing is also easy to read.

For those interested in using a telescope, Terence Dickinson and Adolf Schaller offer an easy guide in NightWatch: A Practical Guide to Viewing the Universe (Firefly Books, 2006). The book includes helpful inserts and diagrams to guide any telescope user.