The most recognizable planet with a system of icy rings, Saturn is a very unique and interesting planet.

Looking for fun activities to teach kids about the planet Saturn?

This premium worksheet bundle contains a printable fact file and 10 fun and engaging worksheets to challenge your students and help them learn about Saturn. 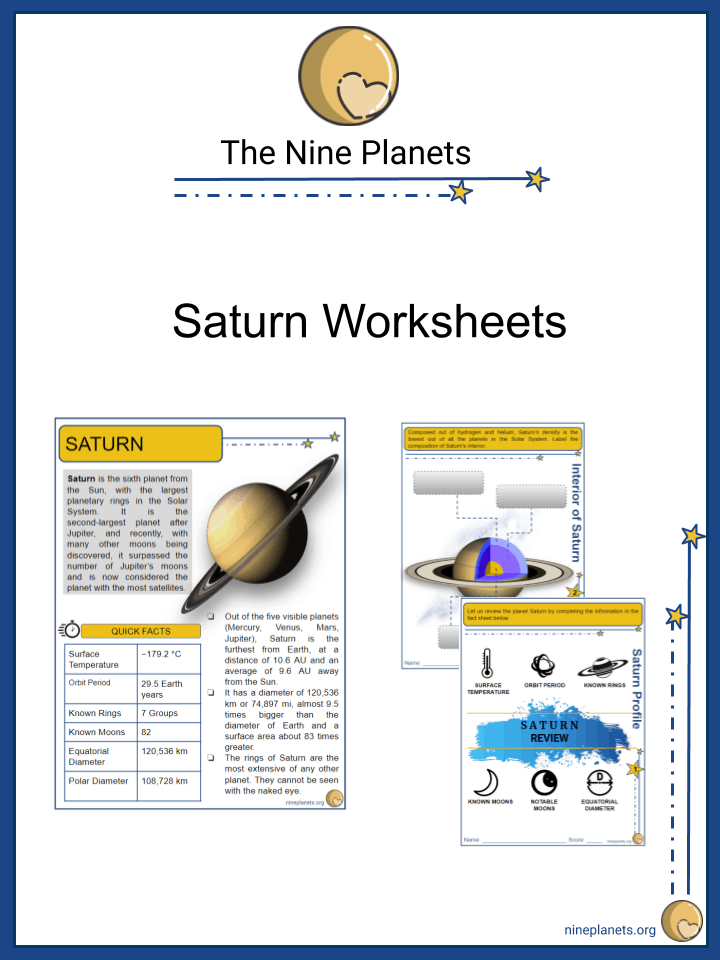 The planet Saturn is named after the Roman god of agriculture. In Greek mythology, he is known as Cronus, the father of Zeus (Jupiter). Saturn is the root of the English word “Saturday.”

Saturn is the sixth planet from the Sun and the second-largest planet in the Solar System after Jupiter. Saturn is the king of the moons because it has the most moons out of any planet, 82, and it may have even more.

Though it is the most distant of the visible planets – planets that can be seen without the need of a telescope or binoculars – a striking feature has always been noted, its rings.

Saturn is nicknamed the “Ringed Planet” – it has more than 30 ring systems around it. It isn’t the only planet with rings, but it definitely has the most beautiful and visible ones.

The first person to observe Saturn through a telescope was Galileo Galilei in the 1600s. Galileo wasn’t sure of what he was seeing, and at first thought the planet had handles, and then he believed he observed three planets, when in fact, they were the rings of Saturn.

The rings of Saturn are made out of chunks of ice and rock. Their exact origin is unknown. These rings are very bright and are composed of many small particles that circle Saturn at their own speeds.

These objects range in size from a centime to several meters, and some few are kilometer-sized.

Saturn itself is mostly a ball of hydrogen and helium, and this is why it is known as a gas giant like Jupiter. Like Jupiter, Saturn has bands/clouds but much fainter, some of the spots in those bands are areas where big storms occur.

A day on Saturn goes by very fast. It takes only 10.7 hours for Saturn to spin once – a day. A year on Saturn is actually different because it is very far from the Sun.

Saturn circles the Sun once every 29 Earth years – thus one Saturnian year.

The biggest planet of the Solar System, Jupiter, has 1.2 times the diameter of Saturn. Satururn’s diameter is around 10 times bigger than Earth’s and Venus’s.

The rings of Saturn will disappear

Scientists believe that Saturn will lose its rings in about 100 million years. The rings are pulled into Saturn by the planet's gravity as a dusty rain of ice.

These particles are also under the influence of Saturn’s magnetic field and the event is often called Ring Rain.

The many names of Saturn

Many cultures across the world have given their own names to Saturn. In Greek, Saturn was known as Phainon while in Hindu astrology, it was known as Shani, a deity that judges the good and bad deeds done in life.

In the Chinese and Japanese cultures, Saturn was designated as the Earth Star.

Only four spacecraft have visited Saturn:

The spacecraft Cassini studied Saturn for about 13 years. After it completed its mission, it was intentionally vaporized in Saturn’s atmosphere in 2017.

Saturn has the eeriest radio emissions in the Solar System. The planet’s sounds can be found and listened to on the internet, and they are indeed a bit disturbing.

Saturn has a thick atmosphere, but the pressure is so strong that it squeezes gas into a liquid. Winds are very powerful in the upper atmosphere and reach incredible speeds. In fact, they are the second fastest winds present on any planet.

Since it is primarily made out of gases and liquid, Saturn isn’t very dense. If you could put Saturn on water, it would float. The closest planets to Saturn are Jupiter and Uranus.

The planet is bright enough that it can be seen without a telescope or a pair of binoculars, but if you look at it through a telescope, it will appear squished since its made out of gas and liquid and it spins very quickly.

Saturn’s outer moons are also visible through the use of a telescope. The planet has recently gained the title of King of the Moons since now 82 moons have been confirmed. Before this, it was Jupiter who was king.

Though life cannot exist on Saturn because it doesn’t have a surface, its moons Titan and Enceladus have internal oceans. They could possibly hold life. Some missions are planned to visit those moons soon.

Scientists believe that Saturn will lose its rings in about 100 million years. 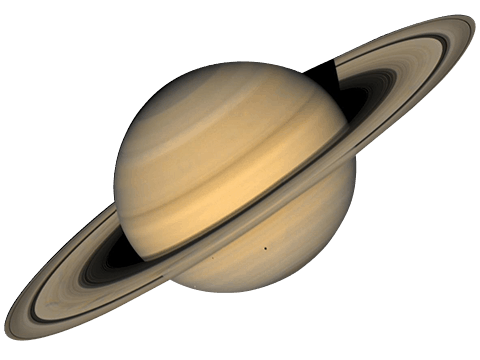