Venus is the second planet from the Sun, and the sixth largest of all the planets. It is named after the Roman goddess of love and beauty.

But how can this be? Well, Venus has gases and clouds of sulfuric acid that traps the heat and keeps Venus toasty warm. It is so hot on Venus, that even metals would melt and become liquid.

Venus is a little smaller than Earth, but like our planet, it has mountains, volcanoes, and few craters that indicate a relatively young surface. Both worlds also have similar densities and chemical compositions.

Venus is sometimes referred to as Earth’s sister since scientists believe that it once had large amounts of water; however, it boiled away due to high temperatures.

This might have also happened to our planet if it was closer to the Sun. Venus is quite special since it spins in the opposite direction of most other planets, including Earth.

Most of Venus’s surface consists of gently rolling plains. Mountains and hills are rare. Much of the surface is covered by lava flows. In fact, there are plenty of large volcanoes like the ones in Hawaii on Venus.

One of the largest volcanoes on Venus is Sif Mons. The interesting fact is that Venus has many active volcanoes on its surface to this day.

Venus’s rotation is also very slow. One day on Venus is equal to 243 Earth days, and one year or one trip around the Sun takes 225 Earth days. This means that a day is longer than a year on Venus.

Since Venus rotates backwards, the Sun rises in the west and sets in the east.

Venus has a radius of 6.051 kilometers / 3.760 miles and a diameter of 12.104 km / 7.521 mi. It is only slightly smaller than Earth. It is the sixth-largest planet in the Solar System and the second-largest terrestrial planet.

Venus is Earth’s sister since it has a similar size, density, a similar internal structure, mass, volume, and atmospheric components of carbon dioxide and nitrogen.

Many believe that Venus was even more similar to Earth billions of years ago, having even oceans, but something happened and changed all of this.

The Morning and Evening Star

The Venus tablet of Ammisaduqa, believed to have been compiled around the mid-17th century BCE, shows that the Babylonians understood that the Evening Star and Morning Star were a single object.

Venus was referred to in the tablet as the “bright queen of the sky”, and they could support this view with detailed observations. The Chinese people referred to the mourning Venus as The Great White or Opener of Brightness, and they reffered to the evening Venus as the Excellent West One.

Venus and Mercury are the only terrestrial planets in the Solar System that don’t have moons. The planets closest to Venus, its neighbors, are Earth and Mercury.

Venus is almost always visible with the naked eye. You don’t need binoculars or telescopes to see it. In ancient times, the planet was also called the “morning star” or the “evening star” since it is very bright. 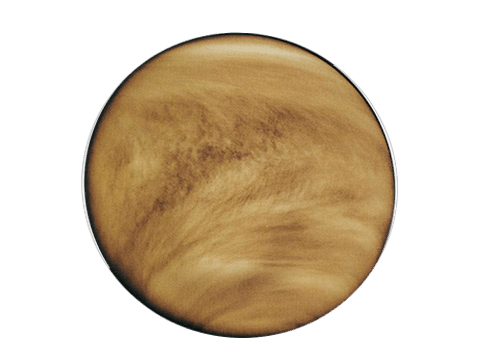