Pluto will always be the ninth planet to us! Smaller than Earth’s moon, Pluto was a planet up until 2006 and has five of its own moons!

Looking for fun activities to teach kids about the planet Pluto?

This premium worksheet bundle contains a printable fact file and 10 fun and engaging worksheets to challenge your students and help them learn about Pluto. 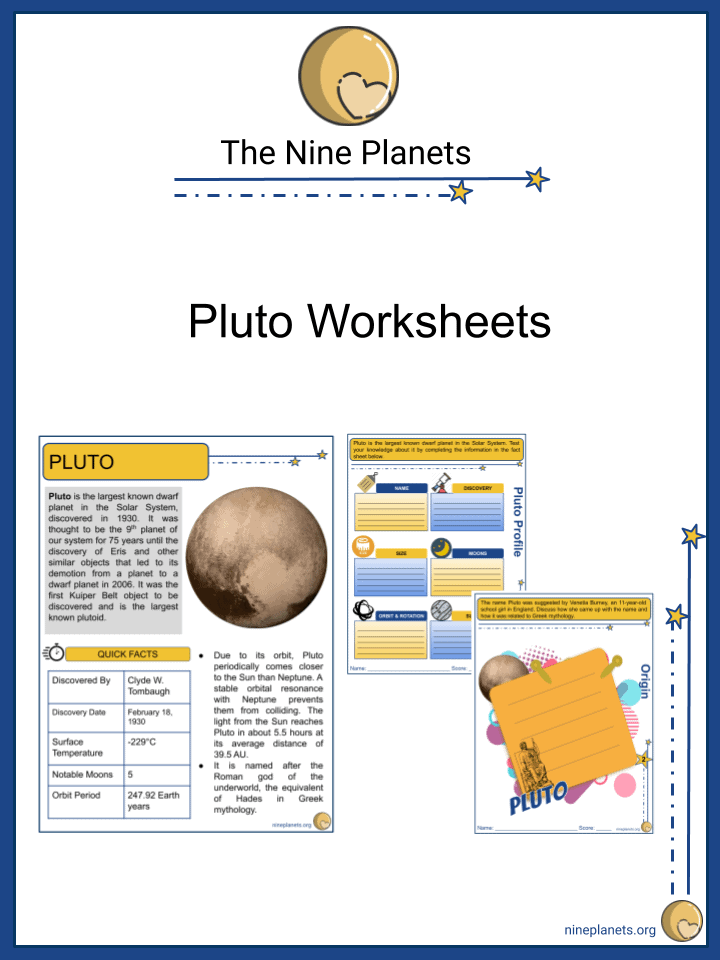 Pluto is usually farther away from the Sun than Neptune, but sometimes it comes closer. It is the smallest planet of the Solar System.

It is also smaller than seven of the Solar System’s moons. Today, Pluto isn’t considered a planet anymore, but rather a dwarf planet because of its size. It is though the largest among the dwarf planets.

Pluto is made out of primarily from nitrogen ice and rock. Its surface is covered with mountains, valleys, and craters. Its surface varies in both brightness and color.

Some regions are charcoal black, dark orange, white, and has some portions of red similar to Mars. Some notable regions are:

Scientists believe that Pluto has a dense core surrounded by a mantle of water ice. The atmosphere of Pluto is similar to a comet. It is thin, tenous, and expands when it comes closer to the Sun, but then it collapses as it moves farther away.

When Pluto approaches the Sun, the ices change from solid to gas, and they rise up temporarily to form a thin atmosphere. The tenuous atmosphere is consistent with nitrogen, methane, and carbon monoxide.

Pluto spins very slowly, and as such, one day there is equal to 153 hours. Since Pluto is so far away from the Sun, and because it has an unusual orbit, one trip around the Sun or a  year, is completed within 248 Earth years.

After Pluto was discovered, a survey was conducted to name the planet. Venetia Burney, an eleven-year-old schoolgirl in Oxford proposed the name, Pluto.

The name won by popular votes, and it was announced to the public on the 1st of May 1930. The little girl received a gift for naming the planet, a modern equivalent of 450 USD.

Pluto – Definition of a planet

Pluto’s declassification from a planet to that of a dwarf planet sparked many debates in the scientific community. It forced them to come up with a definition, and now we know that there are three requirements for a celestial body to be considered a planet:

Pluto failed to meet the third condition. Its mass is substantially less than the combined mass of the objects in its orbit.

Pluto periodically comes closer to the Sun than Neptune, but they will never collide. Pluto has five moons: Charon, Styx, Nix, Kerberos, and Hydra.

The moon Charon is the biggest known moon of a dwarf planet ever discovered. Charon is even bigger than the dwarf planet Eris. Pluto is the second closest dwarf planet to the Sun, second only to Eris. 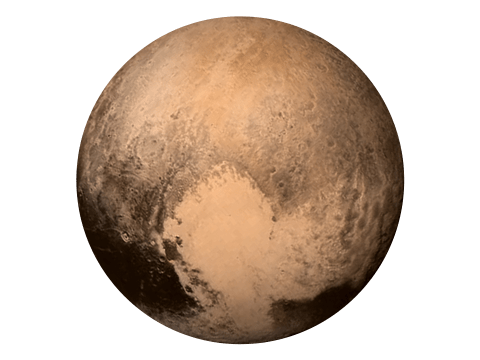