Neptune is now the most distant planet (sorry, Pluto) and is a cold and dark world nearly 3 billion miles from the Sun.

The planet Neptune is named after the Roman god of the sea. In Greek mythology, he is known as Poseidon. The planet was probably given this name due to its blue appearance.

Neptune is the farthest planet from the Sun, and the fourth largest out of all the planets of the Solar System. It is more than 30 times farther from the Sun than Earth.

Though it is far, it is not the coldest planet, that title belongs to Uranus. However, Neptune is very cold, nonetheless. It is a dark and windy planet, having the most powerful winds in the Solar System.

The reason why Neptune is blue is due to the presence of a specific gas named methane. This is also why the planet Uranus is also blue. Both Uranus and Neptune are known as ice giants due to their compositions.

The atmosphere of Neptune is made out of hydrogen, helium, and methane. The planet is basically a thick fog of water, ammonia, and methane over an Earth-sized solid center.

Like other gas giants, Neptune has a ring system, six of them to be exact, but they are faint. Neptune also has 14 confirmed moons. The weather on Neptune is very active. Sometimes dark spots form in the atmosphere, which are basically storms the size of Earth.

It has the wildest and strangest weather out of all the planets in the Solar System. The winds speeds on Neptune are the most outstanding.

Some winds have been able to reach up to 2,160 km / 1.324 mi per hour. They are nearly a supersonic flow. These winds break the sound barrier being 5 times stronger than the strongest winds on Earth.

A day on Neptune is less than a day on Earth. It lasts for only 16 hours. Since Neptune is the farthest planet from the Sun, it has a very long journey to complete around it. One year on Neptune is equal to 165 Earth years.

Uranus is 103% bigger than Neptune, being only slightly larger with a couple of hundred km/mi. In comparison to gas giants, things get serious.

The name Neptune was first given to the seventh discovered planet of the Solar System. However, the name was discarded but Uranus ultimately led to the discovery of the eighth planet, which would bear the name Neptune.

Other names for Neptune

Most languages use some variant of the name “Neptune” for the planet. In Chinese, Vietnamese, Japanese and Korean, the planet’s name was translated as “sea king star” while in Mongolian it is called Dalain Van.

In modern Greek, the planet’s name is Poseidon while in Māori the planet is called Tangaroa, the name of the Māori god of the sea.

The discovery of Neptune

Neptune is invisible to the unaided eye and thus it evaded discovery for centuries, until in 1846 when the works of Le Verrier and Johann Galle found the bluish planet.

Uranus was the greatest factor in the discovery of Neptune. Astronomers were calculating the orbit of Uranus and observed that the planet wasn’t following their models.

This forced astronomers to conclude that another undiscovered planet might be the reason behind the perturbations. Le Verrier predicted where this mysterious planet should be, and Johann Galle found it one degree away from the predicted point. This makes Neptune the first planet ever to be discovered by the use of mathematical calculations and predictions.

Neptune is the only planet that isn’t visible to the naked eye. Only with instruments such as telescopes you can see it. Since Neptune is the eighth and most distant planet from the Sun, its only neighbor is Uranus.

The blue planet was discovered in 1846 by Urbain Le Verrier, John Couch Adams, and Johann Galle by the use of mathematical predictions.

One of the largest moons of Neptune is Triton. Triton is even bigger than the dwarf planet Pluto, and some scientists believe that the moon is also a dwarf planet, captured by Neptune’s gravity. Triton is the seventh-largest moon in the Solar System. 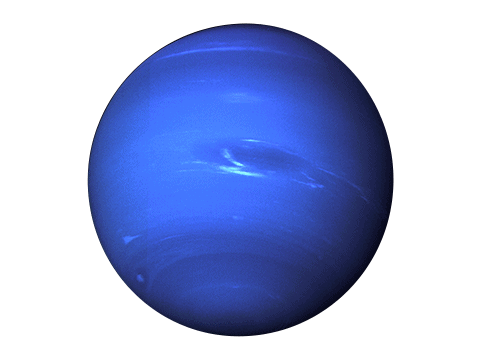