Uranus has a very unique rotation–it spins on its side at an almost 90-degree angle, unlike other planets.

Uranus is the seventh planet from the Sun and the third largest of all the planets in our Solar System. Both Uranus and Neptune are considered ice giants due to their different compositions from the other gas giants Jupiter and Saturn.

Both Uranus and Neptune are blue because they have methane. Uranus is larger in size than Neptune but it is smaller in weight. It has thirteen ring systems and 23 confirmed moons.

Every gas giant lacks the presence of a surface. Uranus is made of water, methane, and ammonia fluids above a small rocky center. The thick atmosphere is made of hydrogen and helium like Jupiter and Saturn.

The clouds on Uranus are difficult to see ,but they are present. Some of these clouds were observed ,and they revealed huge storms as big as the United States.

Some of the wind speeds recorded on Uranus were among the most powerful ever witnessed in the Solar System.

Uranus has a shorter day than Earth. One day only lasts 17 hours. One year on Uranus, or the time it takes for it to circle the Sun once, it the equivalent of 84 Earth years. Having to wait for a birthday cake for 84 years is no fun!

Uranus is slightly larger than Neptune, however, it is smaller in mass. In comparison to Earth, Uranus has four times its diameter. When it comes to volume, 63 Earths could fit inside Uranus.

Uranus is the first planet discovered in modern history. The planet was too dim to be seen by ancient civilizations and as such it remained hidden in the darkness of the sky.

Uranus is probably the coldest planet of the Solar System for reasons not yet understood. Something prevents the heat from Uranus’s core from reaching the surface.

Uranus is the only planet in the Solar System that spins on its side. It is believed that this was caused by a collision in the distant past. Like Venus, Uranus also spins in the opposite direction than the other planets of the Solar System.

The closest planets to Uranus, its neighbors, are Neptune and Saturn. Uranus has many moons, 27, and they were named after characters from fictional books.

Uranus was discovered in 1781 by William Herschel, a British astronomer. The planet was visited only once, by the spacecraft Voyager 2, in 1986.

Uranus is sometimes visible in the sky. You won’t need binoculars or a telescope to see it, but you can only view it on a very clear night sky. Even with binoculars, it would be easy to spot the planet. 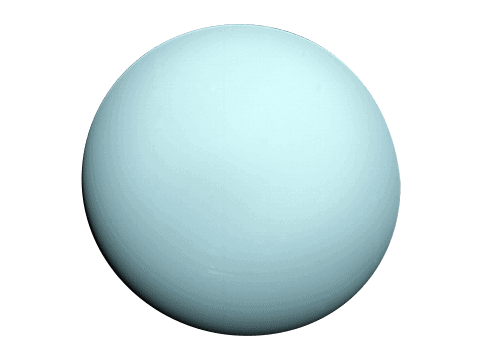