Jupiter is a massive planet, twice the size of all other planets combined and has a centuries-old storm that is bigger than Earth.

The planet Jupiter is named after the supreme Roman god. To the ancient Greeks, he was known as Zeus, ruler of the Greek gods, and Mount Olympus.

Jupiter is the fifth planet from the Sun and the largest planet of the Solar System. It is more than twice as massive as all the other planets combined, being 318 times bigger than Earth.

The planet is very similar to a star, but it never got big enough to start burning. Jupiter has rings surrounding it, but they are very faint and hard to see.

It is the planet with the second-most moons, 79, after Saturn, who has 82. The closest planets to Jupiter are Mars and Saturn. The planet can be seen with the naked eye, you don’t need a telescope or a pair of binoculars to see it.

Jupiter is a gas giant, just like Saturn. It is made mostly out of hydrogen and helium. It doesn’t have a true surface, but it may have a solid core about the size of Earth at its center.

Jupiter is covered in swirling cloud stripes and has enormous storms like the Great Red Spot, which has been going on for hundreds of years.

The atmosphere is very thick, and it is made out of ammonia, sulfur, methane, and water vapor. Jupiter’s atmosphere is the largest planetary atmosphere in the Solar System. It makes up almost the entire planet.

A day on Jupiter goes by very fast. It only lasts for about 10 hours. However, since it is farther away from the Sun than Earth, one year on Jupiter – the time it takes for it to circle the Sun once – is equal to 11.8 Earth years.

Though Jupiter is 2.5 times more massive than all the planets of the Solar System combine, scientists predict that if it would get more mass, the giant would actually get smaller.

More mass will make the planet more dense, and this would cause it to start pulling it in on itself.

Is Jupiter a failed star?

Though some consider Jupiter a failed star, it doesn’t have enough mass to trigger a fusion reaction in its core. That is the mechanism of how stars generate energy, by fusing hydrogen under extreme heat and pressure to create helium, releasing light and heat in the process.

This means that Jupiter has no way of becoming a star unless it would gain around 75 times more mass than it currently has.

Jupiter generates more heat than it receives from the Sun

Since it is the most massive planet in the Solar System, it is the closest to being a star, at least in terms of mass. Because of this mass, Jupiter generates high amounts of heat as it shrinks under gravity. It is unknown when Jupiter will stop shrinking.

The winds on Jupiter are very powerful. They are trapped in the planet’s wide bands of latitude. Each of these bands has a slightly different chemical make-up and temperature.

The Great Red Spot is big enough to hold two Earths. It is a high-pressure region where clouds are much higher and colder than in the surrounding areas. Jupiter also has other spots, but they are far smaller.

Jupiter is very bright in the night sky, second only to Venus. The four most important moons of Jupiter, called the Galilean moons, are also quite visible, but you would need a pair of binoculars to see them.

One of the most important moons of Jupiter is Europa. This moon may have water on it, and it is currently closely studied. Another interesting moon of Jupiter is Io, which is the most volcanically active body in the Solar System.

Scientists believe that Jupiter was twice its current size when it was formed. The giant planet is constantly bombarded with asteroids and comets, almost 200 times more than Earth. 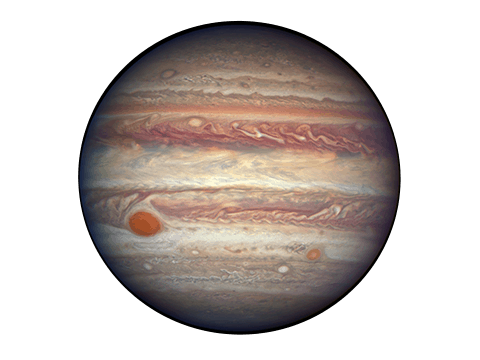