Callisto is a large moon which orbits Jupiter. It was discovered in 1610 by Galileo Galilei, along with Io, Europa and Ganymede. Callisto is the outermost orbiting of the Galilean moons of Jupiter. It is the third largest natural satilette in our Solar System and is almost the same size as the planet, Mercury.

When was Callisto discovered?

Callisto was officially discovered by Galileo Galilei on the 8th January 1610, along with the other Galilean moons of Jupiter — Io, Europa and Ganymede.

The discovery of Callisto and the other moons of Jupiter not only had astronomical but religious implications. The discovery of the Galilean moons led to the understanding that the planets in our Solar System orbit the Sun, rather than the Universe orbiting the Earth.

When Galileo first discovered Callisto and the other moons of Jupiter he named them after a powerful Italian Medici family and called them the Medicean planets. Galileo named each of the moons numerically as; I, II, III, and IV. Callisto was named Jupiter IV. This numeric system was used until the mid-1800s when the satellites were given their mythological names. It was decided this would be best as the numerical system would become very confusing as new moons were being discovered.

How did Callisto get its name?

The moon was named after a nymph, Callisto. She was the daughter of King Lycaon and a follower of Artemis, who attracted Zeus. They became lovers, and when Hera (Zeus’ wife) found out, she transformed Callisto into a bear.

Zeus found out and transported Callisto to the heavens where she became the constellation Ursa Major — also known as the Great Bear or Plough.

Callisto (“ka LIS toh”) is the eighth of Jupiter’s known satellites and the second largest. It is the outermost of the Galilean moons.

Callisto was a nymph, beloved of Zeus and hated by Hera. Hera changed her into a bear and Zeus then placed her in the sky as the constellation Ursa Major.

Callisto is only slightly smaller than Mercury but only a third of its mass.

Unlike Ganymede, Callisto seems to have little internal structure; however there are signs from recent Galileo data that the interior materials have settled partially, with the percentage of rock increasing toward the center. Callisto is about 40% ice and 60% rock/iron. Titan and Triton are probably similar.

Callisto’s surface is covered entirely with craters. The surface is very old, like the highlands of the Moon and Mars. Callisto has the oldest, most cratered surface of any body yet observed in the solar system; having undergone little change other than the occasional impact for 4 billion years.

The largest craters are surrounded by a series of concentric rings which look like huge cracks but which have been smoothed out by eons of slow movement of the ice. The largest of these has been named Valhalla (right). Nearly 3000 km in diameter, Valhalla is a dramatic example of a multi-ring basin, the result of a massive impact. Other examples are Callisto’s Asgard (left), Mare Orientale on the Moon and Caloris Basin on Mercury.

Like Ganymede, Callisto’s ancient craters have collapsed. They lack the high ring mountains, radial rays and central depressions common to craters on the Moon and Mercury. Detailed images from Galileo (left) show that, in some areas at least, small craters have mostly been obliterated. This suggests that some processes have been at work more recently, even if its just slumping.

Another interesting feature is Gipul Catena, a long series of impact craters lined up in a straight line (right). This was probably caused by an object that was tidally disrupted as it passed close to Jupiter (much like Comet SL 9) and then impacted on Callisto.

Callisto has a very tenuous atmosphere composed of carbon dioxide.

Galileo has detected evidence of a weak magnetic field which may indicate some sort of salty fluid below the surface.

Unlike Ganymede, with its complex terrains, there is little evidence of tectonic activity on Callisto. While Callisto is very similar in bulk properties to Ganymede, it apparently has a much simpler geologic history. The different geologic histories of the two has been an important problem for planetary scientists; (it may be related to the orbital and tidal evolution of Ganymede). “Simple” Callisto is a good reference for comparison with other more complex worlds and it may represent what the other Galilean moons were like early in their history. 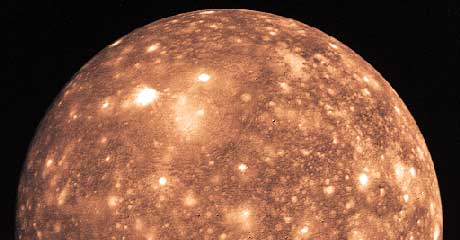