When was Europa discovered?

Europa was officially discovered by Galileo Galilei on the 8th January 1610, along with the other Galilean moons of Jupiter. However, it may have been found on 7th January. Galileo had a low-powered telescope and could not distinguish Europa from Io until 8th January.

The discovery of Europa and the other moons of Jupiter not only had astronomical but religious implications. The discovery of the Galilean moons led to the understanding that the planets in our Solar System orbit the Sun, rather than the Universe orbiting the Earth.

When Galileo first discovered Europa and the other moons of Jupiter he named them after a powerful Italian Medici family and called them the Medicean planets. Galileo named each of the moons numerically as; I, II, III, and IV. Europa was named Jupiter II. This numeric system was used until the mid-1800s when the satellites were given their mythological names. It was decided this would be best as the numerical system would become very confusing as new moons were being discovered.

How did Europa get its name?

The moon was named after Europa, daughter of the king of Tyre, a Phoenician noblewoman in Greek mythology. All Galilean satellites, Europa is named after a lover of Zeus, the Greek version of Jupiter. In Greek Mythology, Europa became a queen of Crete after being courted by Zeus.

Europa (“yoo ROH puh”) is the sixth of Jupiter’s known satellites and the fourth largest; it is the second of the Galilean moons. Europa is slightly smaller than the Earth’s Moon.

Europa was a Phoenician princess abducted to Crete by Zeus, who had assumed the form of a white bull, and by him the mother of Minos.

Europa and Io are somewhat similar in bulk composition to the terrestrial planets: primarily composed of silicate rock. Unlike Io, however, Europa has a thin outer layer of ice. Recent data from Galileo indicate that Europa has a layered internal structure perhaps with a small metallic core.

But Europa’s surface is not at all like anything in the inner solar system. It is exceedingly smooth: few features more than a few hundred meters high have been seen. The prominent markings seem to be only albedo features with very low relief.

There are very few craters on Europa; only three craters larger than 5 km in diameter have been found. This would seem to indicate a young and active surface. However, the Voyagers mapped only a fraction of the surface at high resolution. The precise age of Europa’s surface is an open question.

The images of Europa’s surface strongly resemble images of sea ice on Earth. It is possible that beneath Europa’s surface ice there is a layer of liquid water, perhaps as much as 50 km deep, kept liquid by tidally generated heat. If so, it would be the only place in the solar system besides Earth where liquid water exists in significant quantities.

Europa’s most striking aspect is a series of dark streaks crisscrossing the entire globe. The larger ones are roughly 20 km across with diffuse outer edges and a central band of lighter material. The latest theory of their origin is that they are produced by a series of volcanic eruptions or geysers.

Recent observations with HST reveal that Europa has a very tenuous atmosphere (1e-11 bar) composed of oxygen. Of the many moons in the solar system only five others (Io, Ganymede, Callisto, Titan and Triton) are known to have atmospheres. Unlike the oxygen in Earth’s atmosphere, Europa’s is almost certainly not of biologic origin. It is most likely generated by sunlight and charged particles hitting Europa’s icy surface producing water vapor which is subsequently split into hydrogen and oxygen. The hydrogen escapes leaving the oxygen.

The Voyagers didn’t get a very good look at Europa. But it is a principal focus of the Galileo mission. Images from Galileo’s first two close encounters with Europa seem to confirm earlier theories that Europa’s surface is very young: very few craters are seen, some sort of activity is obviously occurring. There are regions that look very much like pack-ice on polar seas during spring thaws on Earth. The exact nature of Europa’s surface and interior is not yet clear but the evidence is now strong for a subsurface ‘ocean’.

Galileo has found that Europa has a weak magnetic field (perhaps 1/4 of the strength of Ganymede’s). And most interestingly, it varies periodically as it passes thru Jupiter’s massive magnetic field. This is very strong evidence that there is a conducting material beneath Europa’s surface, most likely a salty ocean. 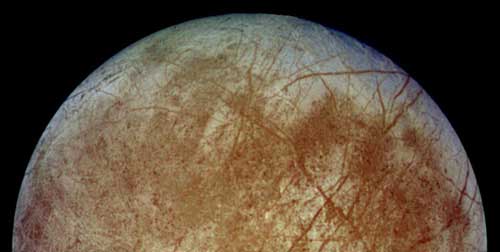