Music for the Planets

Home » General » Music for the Planets

Most of the music on The Nine Planets is taken from the recording of The Planets op. 32 by Gustav Holst by the Royal Philharmonic Orchestra conducted by André Previn (Telarc 80133); the Pluto piece is from a different recording (see below). Click to play excerpts from each movement:

Haydn: Symphony No. 43 in E flat major (“Mercury”), H. 1/43Haydn wrote over 100 symphonies most of which, like this one, are not very memorable. Available only in box sets with other obscure works.Mozart: Symphony No. 41 In C Major K. 551 (“Jupiter”)By far the best piece of music on this list. This is one of Mozart’s best. And that’s saying a lot!Berners: Triumph of NeptuneHovhaness: Saturn, Op.243Lully: Le Grand Divertissement Royal de Versailles, devertissement / comedie, LWV 38 Les suivants de NeptuneI know nothing about these three.Dvorak: RusalkaOne song in this opera is about the Moon.Mathews: Pluto: The RenewerHolst completed “The Planets” in 1917, before the discovery of Pluto. Though he lived until 1934, a few years after Pluto’s discovery, he never added a final movement. Colin Mathews rectified that omission with this new piece which I have used on the Pluto page. It is available along with another recording of The Planets by The Hallé Orchestra conducted by Mark Elder.new music“Asteroid 4179 – Toutatis” by Kaija Saariaho
“Towards Osiris” by Matthias Pintscher
“Ceres” by Mark-Anthony Turnage
“Komarov’s Fall” by Brett Dean
These four pieces were commissioned by Simon Rattle to form companion pieces to his new recording of “The Planets” with the Berlin Philharmonic. 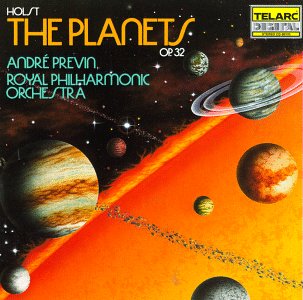