Oberon (“OH buh ron”) is the outermost of Uranus’ large satellites and the second largest:

Oberon is the King of the Fairies and husband of Titania in Shakespeare’s Midsummer-Night’s Dream.

Discovered by Herschel in 1787.

Oberon and Umbriel appear quite similar though Oberon is 35% larger. All of Uranus’ large moons are a mixture of about 40-50% water ice with the rest rock, a somewhat larger fraction of rock than Saturn’s large moons such as Rhea.

Oberon’s heavily cratered surface has probably been stable since its formation. It has far more and larger craters than do Ariel and Titania. Some of the craters have rays of ejecta similar to those seen on Callisto.

Some of the crater floors are dark, perhaps covered with darker material (dirty water?) that upwelled into the crater.

Large faults are also seen across the entire southern hemisphere of Oberon. This indicates some geologic activity early in Oberon’s history.

The picture above shows a mountain on the limb that rises 6 km above its surrounds.

It is actually possible to see Uranus’s 4 largest moons with an amateur telescope. But it takes a very dark sky and a telescope with at least a 12 inch (30 cm) aperture. 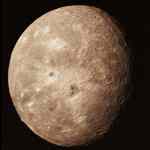