Janus ( “JAY nus”  ) is the sixth of Saturn’s known satellites:

Janus was the god of gates and doorways, depicted with two faces looking in opposite directions; also the root of the English word “January”.

Dollfus is credited with the discovery of Janus but it’s not really certain whether the object he saw was Janus or Epimetheus and his observations led to a spurious orbit. (Walker discovered it independently but his telegram arrived a few hours after Dollfus’.) Larson and Fountain determined in 1978 that there are in fact two moons at about 151000 km from Saturn. This was confirmed in 1980 by Voyager 1.

Janus and Epimetheus are “co-orbital“. The orbital radii of Janus and Epimetheus differ by only 50 km, less than the diameter of either. Their orbital velocities are thus very nearly equal and the lower, faster one slowly overtakes the other. As they approach each other they exchange a bit of momentum the end result of which is to boost the lower one into a higher orbit and to drop the higher one to a lower orbit. They thus exchange places. The exchange takes place about once every four years. The orbital data given here is as of the time of the Voyager encounters.

Janus is extensively cratered with several craters larger than 30 km but few linear features. Its surface appears to be older than Prometheus’ but younger than Pandora’s. 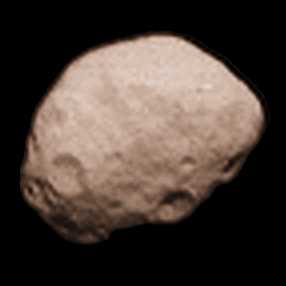