Most meteors never hit Earth’s surface. Almost all of them are smaller than a grain of sand. As such they disintegrate in the atmosphere.

A meteor shower is a celestial event in which different numbers of meteors are observed to radiate or originate, from one point in the night sky.

Looking for fun activities to teach kids about Meteor Shower?

This premium worksheet bundle contains a printable fact file and 10 fun and engaging worksheets to challenge your students and help them learn about Meteor Shower. 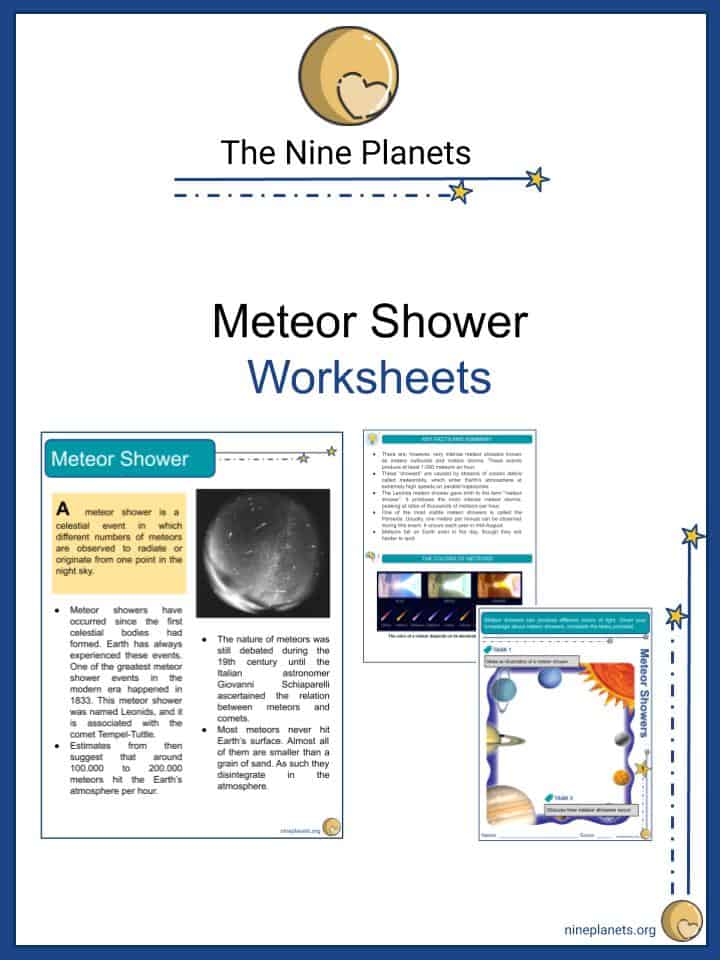 Meteor showers have occurred since the first celestial bodies had formed. Earth has always experienced these events. One of the greatest meteor shower events in the modern era happened in 1833. This meteor shower was named Leonids, and it is associated with the comet Tempel-Tuttle.

Estimates from then suggest that around 100.000 to 200.000 meteors hit the Earth’s atmosphere per hour. The nature of meteors was still debated during the 19th century until the Italian astronomer Giovanni Schiaparelli ascertained the relation between meteors and comets.

In 1951, the American astronomer Fred Whipple demonstrated that comets produce debris by water vapor drag, and by breaking. He envisioned comets as “dirty snowballs”, made up of rock embedded in ice, orbiting the Sun.

Meteors, are basically space rocks that fall towards planets, or other celestial bodies. The atmosphere of a celestial body heats up these rocks making them appear bright. The bright streak is not actually the rock, but rather it is the glowing hot air as the hot rock zips through the atmosphere.

When many meteoroids hit the atmosphere of a celestial body, they are called meteor showers. Comets also orbit the Sun with a lop-sided type of orbit. As they get closer to the Sun, amounts of its icy surface boils off, releasing many particles of dust and rock the size of sand grains.

This debris gets thrown out along the comet’s path, especially in the inner solar system. As Earth makes its journey around the sun, its orbit crosses the orbit of a comet resulting in many meteor showers. Given the number of comets orbiting the sun, this happens frequently every year. The maximum size of these meteors is about the size of a boulder. Many of them burn up in Earth’s atmosphere, but some actually hit the surface.

The “tails” of the meteors mostly point back to the same spot on the sky. This is because they are coming from the same angle. Meteor showers are usually named after the constellation where they appear to come from. But that doesn’t necessarily mean they come from there, it is simply a matter of preference and not actuality.

They travel in parallel paths, and at the same velocity creating the illusion that they radiate from a single point in the sky. This radiant point is caused by perspective, similar to parallel railroad tracks – when viewed from a distance they appear to come together in a single point. Due to their brightness, they are often termed as “shooting stars.”

The Meteor Data Centre lists over 900 suspected meteor showers of which about 100 are well established. However, there are about 6 major meteor showers that stand out:

1. Quadrantids – It occurs mostly in late December and early January. They originate from 2003 EH1- an asteroid or a possible "rock comet." Radiant – Constellation Bootes. Around 80 meteors per hour fall during this event with a velocity of 25.5 mi / 41 km per second. The Quadrantids are best viewed in the Northern Hemisphere.

2. Lyrids – From mid to late April. They originate from the comet Thatcher. Radiant – Constellation Lyra the Harp. Around 20 meteors per hour fall during this event with a velocity of 29.8 mi / 48 km per second. The Lyrids can be tracked by searching for the star Vega. This is one of the oldest known meteor showers. It has been observed for over 2.700 years.

3. Perseids – Active in mid-August. It originates from the comet 109P/Swift-Tuttle. Radiant – Constellation Perseus.  Around 60 meteors per hour fall during this event with a velocity of 36.6 mi / 59 km per second. The Perseids are one of the most visible meteor showers. They can be seen from any location but especially from the Northern Hemisphere.

4. Orionids – Active in late October-early-November. It originates from the comet 1P/Halley. Radiant – Between the constellations of Orion and Gemini. Around 15 to a maximum of 50-70 meteors fall during this event with a fast velocity of 41 mi / 66 km per second. The Orionids are among the brightest and fastest meteor showers. This event can be best viewed from both the Northern and Southern hemispheres during the hours after midnight.

5. Leonids – The peak is reached in mid-November. It originates from the comet 55P/Tempel-Tuttle.  Radiant – Constellation Leo. Around 15 meteors per hour fall with a velocity of 44 mi / 77 km per second. They are among the brightest, fastest, and colorful meteor showers.

About every 33 years or so, Earth can experience a Leonid meteor storm that can peak to hundreds to thousands of meteors per hour. The last Leonid meteor storm took place in 2002. The Leonids are best viewed starting at about midnight local time. Leonid storms gave birth to the term meteor shower.

6. Geminids – Active in early to mid-December. It originates from 3200 Phaethon - an asteroid or a possible "rock comet." Radiant – Constellation Gemini. Around 120 meteors fall per hour with a velocity of 22 mi / 35 km per second.

Geminids are considered to be one of the best and most reliable annual meteor showers. They tend to be yellow in color and have begun their activity since mid-1800. It is best viewed during the night and predawn hours and they are visible across the globe. This shower is considered one of the best opportunities for young viewers since this shower starts around 9 or 10 p.m.

At the upper edges where meteoroids strike, the two planets are more similar. Meteor showers on Mars tend to be less bright due to the distance from the sun, and the slower velocity also contributes to this dimness.

Generally, meteor showers on other planets are difficult to observe, but any celestial body with a reasonably transparent atmosphere can also have meteor showers.

There are many dedicated websites on the internet that track and observe future meteor showers. Usually, big events are announced rapidly as well as minor ones.

If the Leonid meteor shower stays true to its 33 year period meteor storm, then we will probably have the chance to see a spectacular view of meteors descending upon Earth in 2035, in mid-November.

Meteor showers are unpredictable due to their nature, with new and unknown comets having the potential to “birth” new meteor showers at any given moment.