Titan is the fifteenth of Saturn’s known satellites and the largest:

In Greek mythology the Titans were a family of giants, the children of Uranus and Gaia, who sought to rule the heavens but were overthrown and supplanted by the family of Zeus.

Discovered by Christiaan Huygens in 1655.

It was long thought that Titan was the largest satellite in the solar system but recent observations have shown that Titan’s atmosphere is so thick that its solid surface is slightly smaller than Ganymede’s. Titan is nevertheless larger in diameter than Mercury and larger and more massive than Pluto.

Surface viewOne of the principal objectives of the Voyager 1 mission was the study of Titan. Voyager 1 came within 4000 km of the surface. We learned more in the few minutes of that fly-by than in the previous 300 years. Then in late 2004, the Cassini orbiter began a series of close encounters with Titan, taking data with many instruments. And in January 2005, the Huygens probe actually landed on the surface of Titan and sent back images from the surface.

Titan is similar in bulk composition to Ganymede, Callisto, Triton and (probably) Pluto, ie about half water ice and half rocky material. It is probably differentiated into several layers with a 3400 km rocky center surrounded by several layers composed of different crystal forms of ice. its interior may still be hot. Though similar in composition to Rhea and the rest of Saturn’s moons, it is denser because it is so large that its gravity slightly compresses its interior.

Alone of all the satellites in the solar system, Titan has a significant atmosphere. At the surface, its pressure is more than 1.5 bar (50% higher than Earth’s). It is composed primarily of molecular nitrogen (as is Earth’s) with no more than 6% argon and a few percent methane. Interestingly, there are also trace amounts of at least a dozen other organic compounds (i.e. ethane, hydrogen cyanide, carbon dioxide) and water. The organics are formed as methane, which dominates in Titan’s upper atmosphere, is destroyed by sunlight. The result is similar to the smog found over large cities, but much thicker. In many ways, this is similar to the conditions on Earth early in its history when life was first getting started. But it is this thick hazy atmosphere that makes it so hard to see Titan’s surface.

Titan has no magnetic field and sometimes orbits outside Saturn’s magnetosphere. It is therefore directly exposed to the solar wind. This may ionize and carry away some molecules from the top of the atmosphere. It may also drive some of Titan’s peculiar chemistry.

At the surface, Titan’s temperature is about 94 K (-290 F). At this temperature water ice does not sublimate and thus there is little water vapor in the atmosphere. Nevertheless, there appears to be a lot of chemistry going on; the end result seems to be a lot like a very thick smog.

There are scattered variable clouds in Titan’s atmosphere in addition to the overall deep haze. These clouds are probably composed of methane, ethane or other simple organics. Other more complex chemicals in small quantities must be responsible for the orange color as seen from space. Analysis of the Huygens data will tell us a great deal about the details of the atmospheric chemistry.

Prior to Cassini’s arrival, it seemed likely that the clouds would produce a rain of ethane or methane onto the surface perhaps producing an “ocean” up to 1000 meters deep. However, this seems not to be the case at least at the present time. There is little doubt that some active processes are occuring on Titan; there are few if any craters visible indicating that the surface must be very young. But it may be that the “lakes” are more slushy than liquid or that the basins are not filled with liquid at all times. Preliminary results from Huygens indicate that while Titan’s rivers and lakes appear dry at the moment, rain may have occurred not long ago. There is clear evidence for “precipitation, erosion, mechanical abrasion and other fluvial activity”. In addition, Cassini has found evidence of a peculiar kind of volcano on Titan that may account for some of the unusual features of Titan’s atmosphere.

We are beginning to get some understanding of Titan’s surface by combining the data from all the sources available. Large ground based observatories operating in the infra-red can see some details as can the Hubble Space Telescope. These show a huge bright “continent” (preliminarily called “Xanadu“) on the hemisphere of Titan that faces forward in its orbit and some darker regions that are suggestive of oceans or lakes. Cassini’s much higher resolution infrared images (below right, click for animation) show the same structures in more detail. And the close-ups from Huygens (left) show what appear to be drainage channels and shorelines.

These observations also confirm that Titan’s rotation is in fact synchronous like most of Saturn’s other moons.

Cassini’s IR camera has detected a strange and as yet unexplained bright spot on Titan’s surface.

Titan is a difficult object to study. The Cassini instruments are specifically designed to penetrate the haze, its radar mapper can see right thru it and the Huygens images show the surface clearly. But the orbiter images are still frustratingly vague and the Huygens images are few in number and cover only a tiny area. Analysis of this data will take some time; Titan is a very strange place. 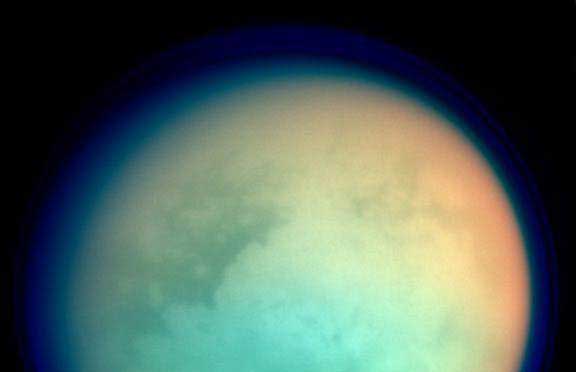