The Pisces Constellation for Kids 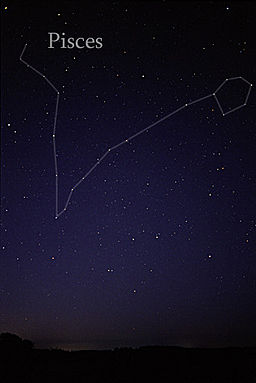 The two celestial fish that form the Pieces Constellation symbolize the gods' Venus and Cupid (in Roman mythology) or Aphrodite and her son (from Greek mythology), who escaped the monster Typhon by transforming themselves into fish.

What Does the Constellation of Pisces Represent?

The constellation of Pisces consists of a pair of fish oriented in different directions. A common star connects them at the tail.

There are two legends related to what the celestial fish represent: the Greek one, which describes the escape of Aphrodite and her son, who were being chased by the monster Typhon sent by the Titans. The story goes that the goddess and her boy were either transformed into fish or two fish rescued them. 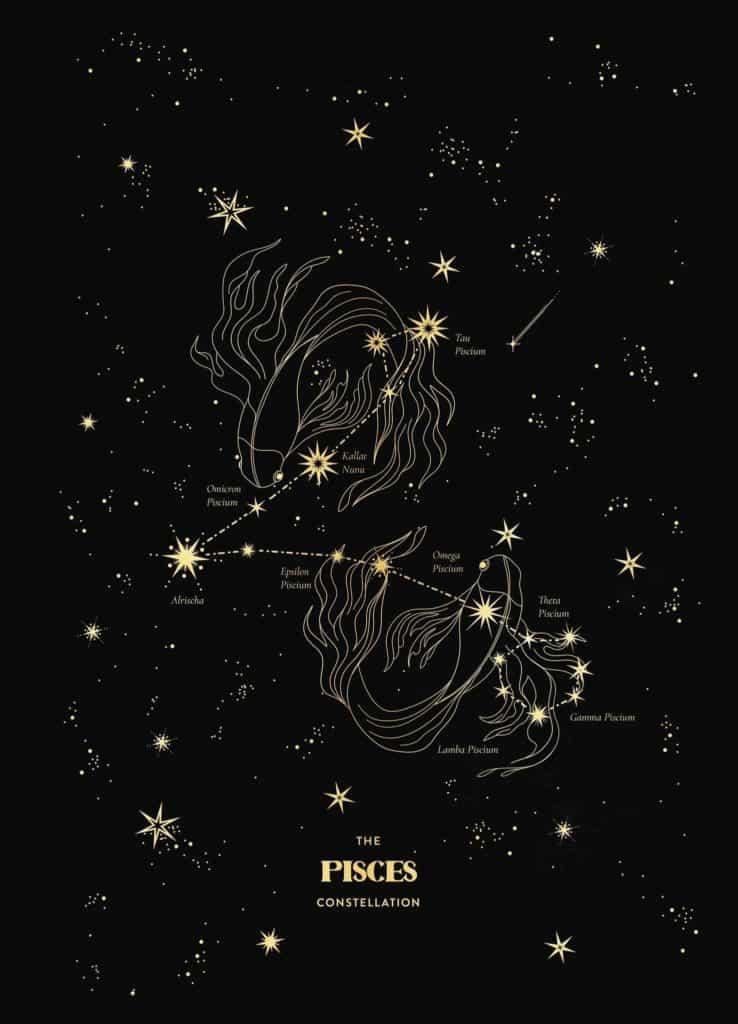 The second legend, the Roman version, is focused on the runaway of Venus and Cupid on the backs of two fishes (analogies from the Greek mythology into the Roman mythology, of Aphrodite and Eros).

Where Can You See the Constellation of Pisces?

The constellation of Pisces is situated in the first quadrant of the Northern Hemisphere (NQ1), occupying an area of 889 square degrees. The sizeable V-shaped region representing the Pisces and the dim stars makes it difficult to spot in the night sky. However, Northern Hemisphere observers discovered that Pisces could be seen much more clearly in early autumn. 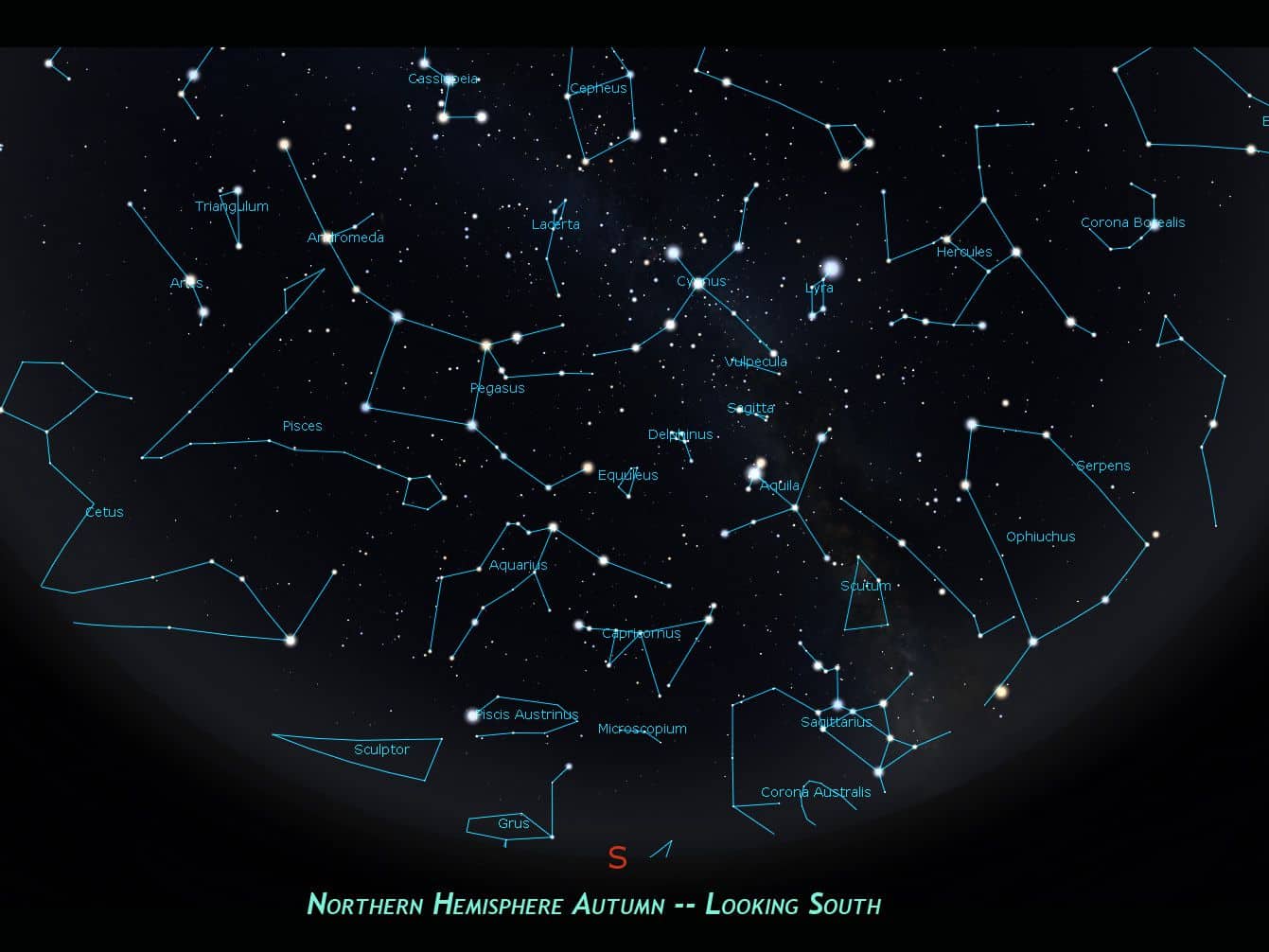 It's best first to identify the Pisces Circle (also named the Western Pisces Head), placed in the south of the Square of Pegasus. The best time to see it: between November 6 and November 9, at 9 P.M.

Other constellations surrounding it are Andromeda, Aquarius, Aries, Cetus, Pegasus, and Triangulum.

Fun Kids Facts About the Constellation of Pisces

- Pisces is one of the constellations forming the zodiac family, along with Aries, Taurus, Gemini, Cancer, Leo, Virgo, Libra, Scorpius, Sagittarius, Capricornus, and Aquarius.

In some classical interpretations, the fish symbol is derived from the ichthyocentaurs (sea beings part human, part horse, part fish). Pisces is also associated with other mythological creatures or deities such as Poseidon or Neptune, Christ, Aphrodite, Eros, Typhon, Vishnu, and the Sumerian goddess Inanna.

- Alpherg is the brightest star in Pisces, and it is 457 times more luminous than our Sun. However, our Sun is hotter than Alpherg.

- The Piscids meteor shower occurs during September and Octomber, with up to 10 meteors being visible per hour.

The Pisces constellation spreads out for over 889 square degrees; therefore, it occupies the 14th place in size, taking up a 2.2% area of the sky. Pisces is also the 4th most prominent zodiac constellation.

What Are the Major Stars in the Constellation of Pisces?

The constellation Pisces has many exciting and vital stars. The brightest star in this constellation is Eta Pisicium. It's also known as Kullat Nunu –" Nunu" is the Babylonian word for" fish," and" kullat" means either a bucket or the cord used to tie the fish together.

Another common name for this star is Alpherg. The intensive shining giant star (G class) is 294 light-years away from Earth, and it's 457 times brighter than the Sun. It is also around 50 times bigger.

Gamma Piscium, a yellow giant, is the second-brightest star in Pisces, and it is located at about 130 light-years from Earth. The 5.5 billion-year-old star is 61 times more luminous and ten times bigger than the Sun. The star is part of the Circlet of Pisces, an asterism representing the western fish's head.

The third brightest star in Pisces – Alpha Piscium – is actually made up of a pair of white dwarf stars very close to each other. The binary stars are also called Alrescha, a name of Arabic origin.

An asterism is made of a small group of stars or a star pattern, which is not classified as a constellation. Even if an asterism seems similar to a constellation, the difference is that a constellation is a formally-named area of the sky with celestial objects representing persons, animals, often mythological.

In comparison, an asterism doesn't have officially determined boundaries, and it serves as a more general concept, a visually apparent collection of stars and the lines that connect them.

Asterisms vary in shape, from simple forms with just a few stars to more complex collections, covering different sky portions. Some examples are the Big Dipper, the Winter Triangle, or the Great Diamond asterisms.

What Asterisms are in the Constellation of Pisces? 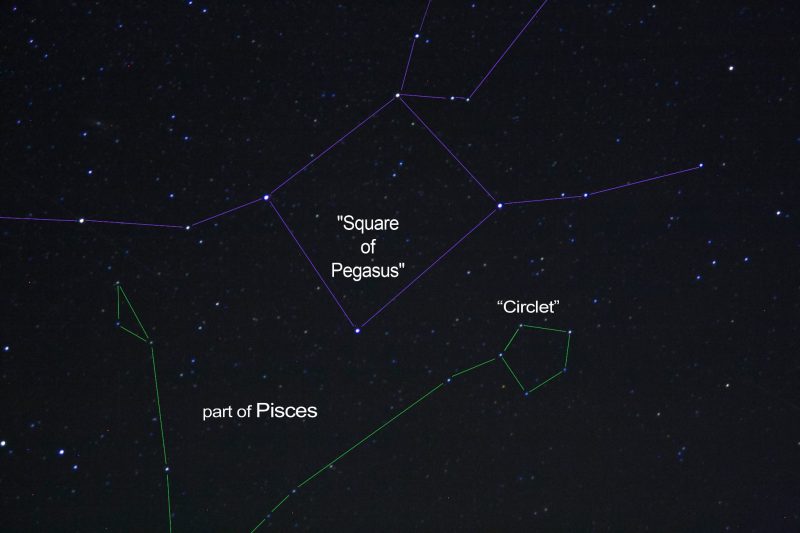 In the south of Pegasus constellation, in Pisces' western fish, we found the Circlet asterism, formed by the stars Gamma, Kappa, Lambda, TX, Iota, and Theta Piscium.

On the Pisces Constellation is another area with star formation named Testudo (or the Turtule), considered by many astronomers as a separate constellation.

Are There Any Messier Objects in the Constellation of Pisces?

The only Messier object in Pisces' constellation is the spiral galaxy Messier 74, located approximately 30 million light-years distant from the Sun, and it is believed to contain about 100 billion stars. The apparent magnitude of Messier 74 is 10.0, and it represents a textbook example of a grand design spiral galaxy, formed by two very distinctly defined spiral arms. 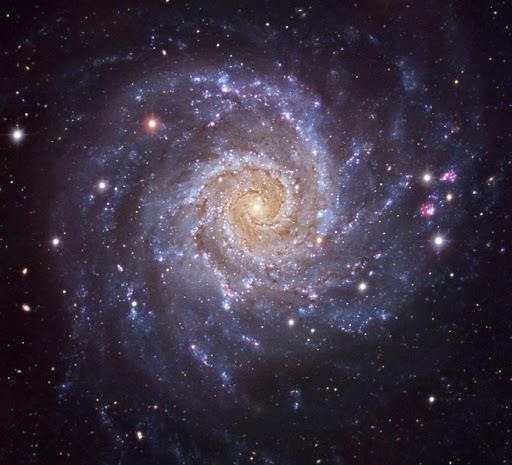 Located 1.5 degrees east-northeast of Eta Piscium, and with a low surface brightness, it is difficult for amateur astronomers to observe.

What Meteor Showers are Associated with Pisces?

There is one major meteor shower associated with Pisces - the April Piscids, and it can be seen between April 8-29, with the peak occurring on April 20 every year.

Another one is Delta Piscids. This meteor shower occurs June 20-26, with the peak occurring on June 23 every year.

Other Characteristics About the Constellation of Pisces 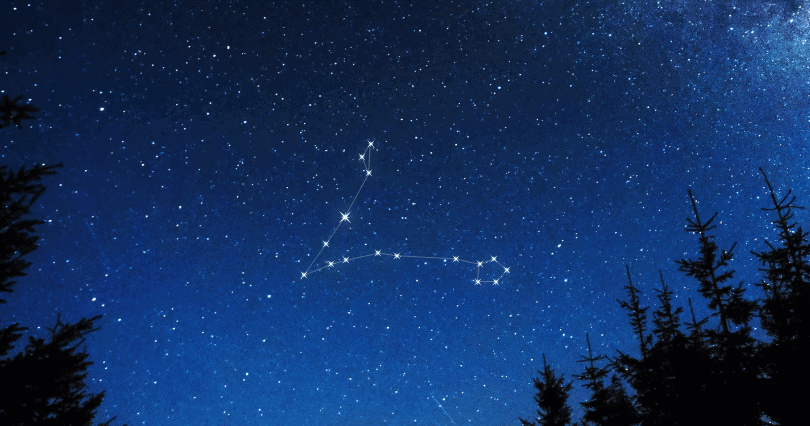 Although the ancient Babylonians associated the Pisces with a swallow bird, the constellation is recognized for over 3,000 years.

Even though Pisces is a large constellation, it is also a faint one with no bright stars. The constellation can be fully viewed in areas away from light pollution.

- Pisces constellation is of Babylonian origin. They were the ones who saw the pair of fish joined by a cord.

- There is one major meteor shower - the Piscids, associated with Pisces.

- The brightest star in this constellation is Alpherg, a G-type giant star.