The Pleiades is among the nearest star clusters to Earth, and it is also visible to the naked eye. Keep reading for comprehensive facts and information.

The name “Pleiades” comes from Ancient Greek, and it most likely comes from “plein”, which translates to “sail”, since the cluster’s importance in delimiting the sailing season in the Mediterranean Sea – “the season of navigation began with their heliacal rising.”

In Greek mythology, the name “Pleiades” was used for the seven divine sisters, daughters of the Oceanid nymph Pleione, and the Titan Atlas.

The name is said to be derived from that of their mother, Pleione, and thus meaning “daughters of Pleione”, however, the name of the star cluster almost certainly came first, and Pleione was invented to explain it.

The Pleiades are a prominent sight in winter in the Northern Hemisphere and are easily visible out to mid-Southern latitudes. Many ancient cultures from around the world knew about them.

One of the earliest known depictions of the Pleiades is probably a Northern German Bronze Age artifact known as the Nebra sky disk, which is dated to about 1600 BC.

The Pleiades, with its thousands of stars, formed between 75 and 150 million years ago. This open cluster is among the closest star clusters to Earth.

Some computer simulations have demonstrated that the Pleiades were probably formed from a compact configuration that resembled the Orion Nebula.

The Pleiades open star cluster is located at around 444 light-years / 136 parsecs away from the Sun. It is so large and bright that it can be seen from Earth with the naked eye.

The Pleiades cluster has around 800 solar masses or about 80.000% of the Sun’s mass. The radius of the Pleiades stretches for about 17.5 light-years. Its overall dimensions are around 110 arcminutes. The cluster core radius is about 8 light-years, and the tidal radius is around 43 light-years.

The Pleiades open star cluster has more than 1,000 confirmed stars, with the exclusion of unresolved binary stars. The brightest of them are usually hot blue stars of spectral type B, that have an estimated age of around 100 million years.

Around 14 stars can be seen with the naked eye if the conditions are right. Though it would appear that blue stars dominate the cluster, it is actually the red stars that do so, however, they are much fainter.

The Pleiades open cluster also contains many brown dwarfs, which typically have less than 8% of the Sun’s mass, thus they are not heavy enough for nuclear fusion reactions to start in their cores and become proper stars.

The brown dwarfs may constitute around 25% of the total population of the cluster, yet contribute only 2% of its total mass.

The most distinguishable and brightest stars of the Pleiades cluster are named for the Seven Sisters of Greek mythology, and their parents, thus a total of 9 bright stars.

The mythological story depicts the sisters as they caught the eye of Orion, a giant huntsman. Atlas, being condemned for his battles against the gods, was condemned to carry the heavens on his shoulders while Orion, the giant, pursued his daughters.

However, the Greek god Zeus stepped in and transformed the sisters into doves, and then into stars to console their father. Even so, Orion, the giant, is still pursuing the Pleiades sisters across the sky, represented by the Orion constellation

When looking upon the Pleiades stars, most people see six, and not seven stars, however, the story of the lost seventh Pleiad harbors a universal theme.

The lost Pleiad may have a basis. Some people with outstanding eye-sight claimed to have seen many more Pleiades stars. Claims go as high as 20 stars.

Michael Maestlin, the mentor of Johannes Kepler, mapped out 11 Pleiades stars before the invention of the telescope. If you can see more than six Pleiades stars, then it means you have really good eyesight.

Many reflection nebula are present around the brightest Pleiades stars. Some believed that these nebulas were the remnants from the formation of the cluster.

The reflection nebula in the Pleiades cluster is now considered to be an unrelated dust cloud in the interstellar medium through which the Pleiades stars are currently passing through.

The nebulosity can be seen even with amateur telescopes. Studies have shown that the dust responsible for the nebulosity is not uniformly distributed, but is concentrated mainly in two layers along the line of sight to the cluster.

This constellation is among the largest in the night sky, and also one of the most prominent of the northern constellations occupying an area of 797 square degrees.

The constellation of Taurus, apart from the two mentioned clusters, also has many interesting stars such as Aldebaran, Elnath, and also other fascinating deep-sky objects such as the Crab Nebula, Crystal Ball  Nebula, merging galaxies and many more open clusters.

These celestial objects are best observed and studied during January. The Pleiades open cluster is among the closest star clusters to Earth, and one of the brightest in our vicinity.

Though the cluster is very bright and easy to find, you may also draw an imaginary line from the stars of Orion’s Belt – Alnitak, Alnilam, and Mintaka  – past Aldebaran – and find the cluster. The Pleiades cluster is also known as Messier 45

It is unknown how habitable planets would be in the Pleiades cluster. However, the Spitzer Space Telescope and Gemini North telescope are closely monitoring the cluster.

They recently found that one of the cluster’s stars, namely HD 23514, which is more massive and luminous than our Sun, is surrounded by an overwhelming number of hot dust particles, and this could be evidence for planet formation around the star.

The Pleiades will continue to exist for many millions of years however, the cluster has been studied closely and many computer simulations predict a grim future.

Most simulations suggest that the cluster will continue to survive for 250 million years before it will start to disperse due to gravitational interactions with its galactic neighborhood. 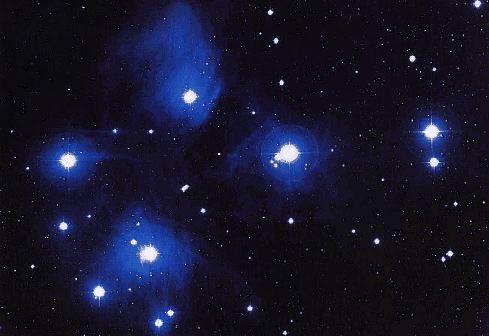