Iapetus (“eye AP i tus” ) is the seventeenth of Saturn’s known satellites and the third largest:

In Greek mythology Iapetus was a Titan, the son of Uranus, the father of Prometheus and Atlas and an ancestor of the human race.

Discovered by Cassini in 1671.

With a density of only 1.1, Iapetus must be composed almost entirely of water ice.

Trailing side of Iapetus from Voyager 2

The leading and trailing hemispheres of Iapetus are radically different. The albedo of most of the leading hemisphere is about .04, as dark as lampblack, whereas the trailing hemisphere’s albedo is .6, as bright as Europa. This difference is so striking that Cassini noted that he could see Iapetus only on one side of Saturn and not on the other.

One explanation of this is that the leading hemisphere is dusted with a coating of material knocked off of Phoebe or some other Saturnian body. However, the color of the leading half of Iapetus and that of Phoebe don’t quite match. Another possibility is that some active process within Iapetus is responsible. The puzzle is compounded by the fact that the dividing line between the two sides is inexplicably sharp.

Near the edge of the dark overlaying material

On the last day of 2004, Cassini made its first close encounter with Iapetus. The images show that the dark material overlays the topography, indicating that it is relatively young. And as in the image to the left, along the edge of the dark area there are many craters where only one side is covered by the dark material; the boundary between the two regions isn’t so sharp after all. So far the Cassini’s data do not resolve the puzzle of the origin of the dark material but there’s more to come!

Cassini’s first encounter with Iapetus also revealed another striking feature not seen before: a ridge 13 kilometers higher than the surrounding terrain that extends at least 1300 km almost almost exactly parallel with Iapetus’s equator (click the image at right for more).

All of Saturn’s moons except for Iapetus and Phoebe are very nearly in the plane of Saturn’s equator. Iapetus is inclined almost 15 degrees. 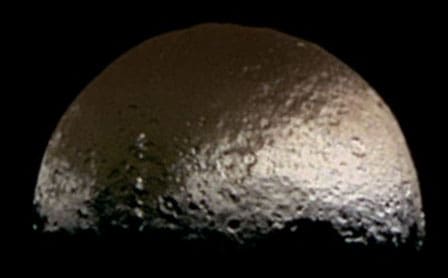