Phoebe (“FEE bee”) is the outermost of Saturn’s known satellites. Phoebe is almost 4 times more distant from Saturn than its nearest neighbor (Iapetus).

Phoebe is the daughter of Uranus and Gaia; grandmother of Apollo and Artemis.

Discovered by Pickering in 1898.

On June 11, 2004 Cassini passed close to Phoebe on its way into the Saturn system, giving us our first real look at it since Voyager and at much higher resolution.

Most of Saturn’s moons are bright but Phoebe’s albedo is very low (.05), as dark as lampblack.

All of Saturn’s moons except for Phoebe and Iapetus orbit very nearly in the plane of Saturn’s equator. Phoebe’s orbit is inclined almost 175° (its north pole is in the opposite direction to Saturn’s).

Phoebe’s eccentric, retrograde orbit and unusual albedo indicates that it may be a captured comet or Kuiper Belt object. Data from Cassini’s 2004 flyby reinforces this idea with the detection of CO2 trapped within its rocks. This rules out the earlier idea that it might have been a captured asteroid. It appears that Phoebe is chemically similar to Pluto and Triton. It is probably very similar to the chemical composition of the outer solar system at the very beginning.

Phoebe is also unusual in that it does not rotate synchronously as do all the other moons of Saturn except Hyperion.

Material knocked off of Phoebe’s surface by microscopic meteor impacts may be responsible for the dark surfaces of Hyperion and the leading hemisphere of Iapetus. 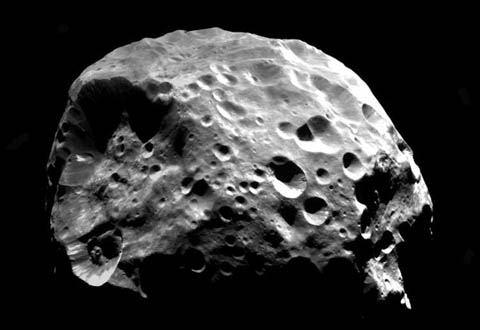