The Kuiper Belt Facts For Kids

The Kuiper Belt resembles the Asteroid Belt, but it is 20 times more comprehensive and up to 20-100 times more massive. Click for more kids facts.

The Kuiper Belt is a donut-shaped structure from the outer Solar System. It extends from the orbit of Neptune, at 30-50 AU from the Sun. One AU is the distance between Earth and the Sun.

The Kuiper Belt For Kids 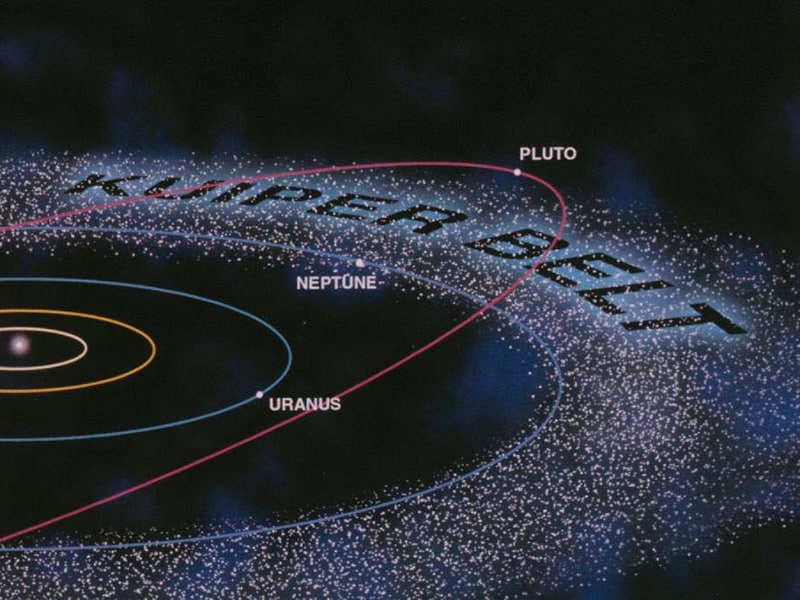 The Kuiper Belt contains millions of comet nuclei, and it is similar to the theoretical Oort Cloud. In the Kuiper Belt, the dwarf planet Pluto was first discovered.

What is the Kuiper Belt and Where is it Located?

What Planets Are in the Kuiper Belt?

In the Kuiper Belt, we can find the dwarf planets Pluto, Haumea, and Makemake. Pluto was discovered in 1930, which further led to the discovery of Trans-Neptunian objects. Pluto was thus the first discovered object beyond Neptune. Frederick Leonard indicated that there are a lot of objects beyond Pluto that needs our attention. 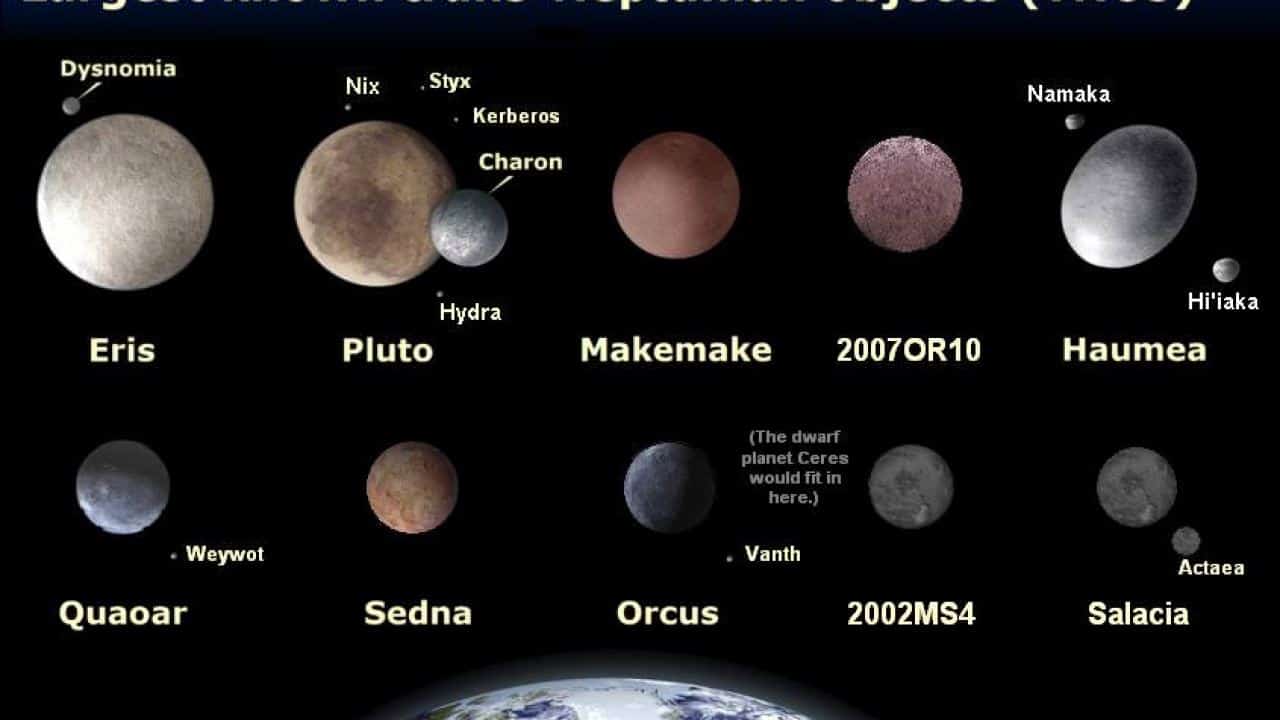 Why is the Kuiper Belt Important?

It is believed that Kuiper Belt objects are primitive leftovers from when the Solar System was created.  Some of the remains condensed into major planets millions of years ago.

- In 2005, scientists noticed a more massive object than Pluto in the Kuiper Belt – Xena (after the famous warrior princess), later on, named Eris. Eris is twice as far from the Sun, and it has its own satellite called Dysnomia.

- The Kuiper Belt is big and mysterious, but you can spot objects within it. : icy items, dwarf planets, comets, and dust.

- The Kuiper belt got its name after the astronomer Gerard Kuiper, although he did not anticipate its existence. Albion further discovers in 1993 the first Kuiper Belt objects, apart from Charon and Pluto. 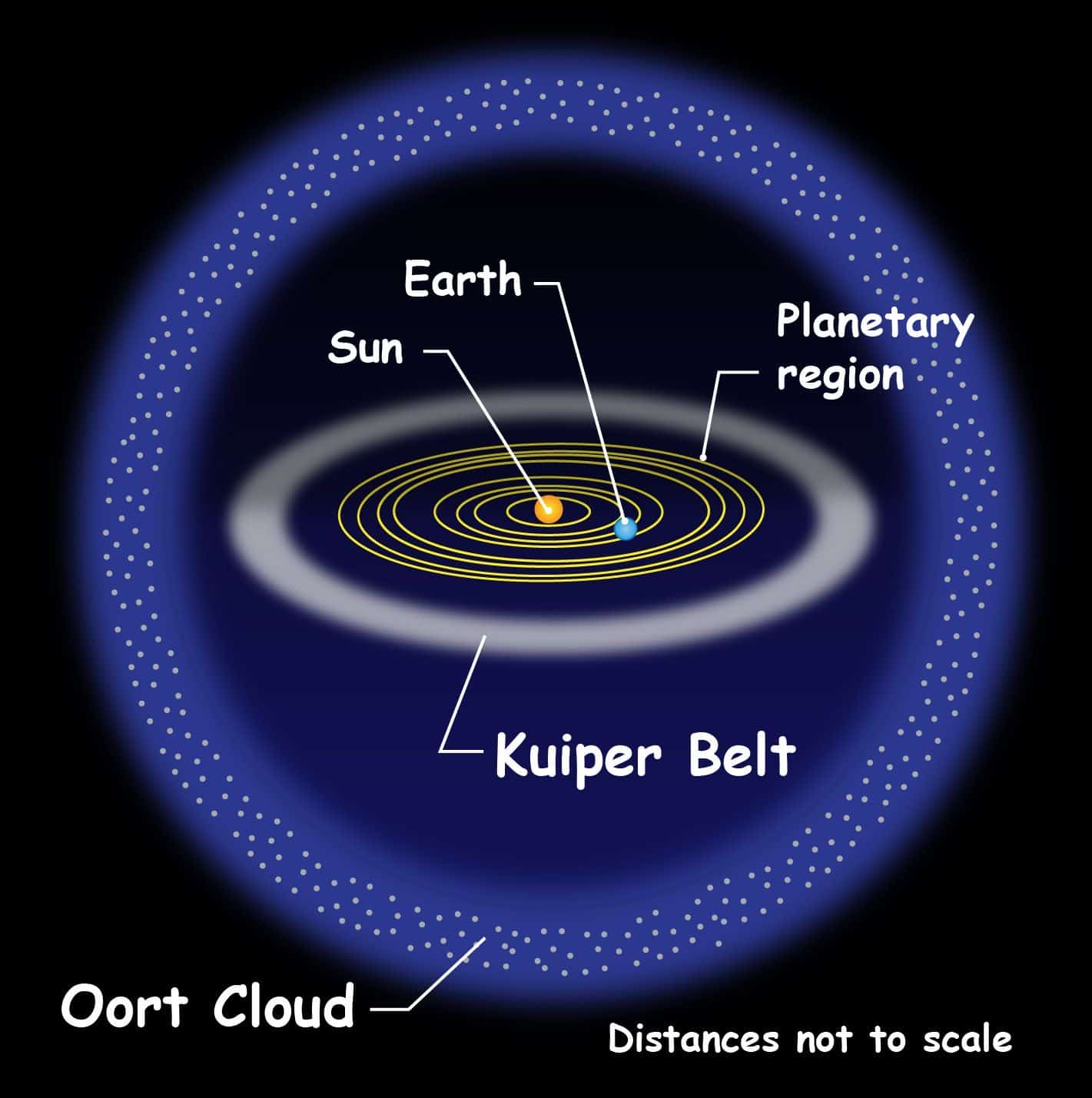 How many Objects are in the Kuiper Belt?

It is speculated that there are approximately 35.000 Kuiper Belt objects larger than 100 km / 62 mi in diameter. The Kuiper Belt also consists of larger celestial objects such as Eris, Pluto, Makemake, Haumea, Quaoar, and other smaller figures. 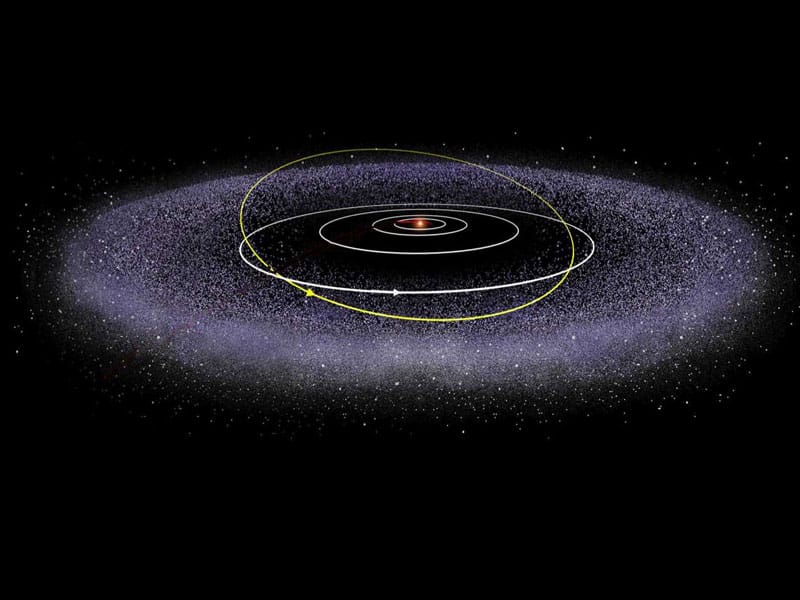 How Long Would it Take to get to the Kuiper Belt?

The first journey made to the Asteroid Belt was made on July 16th, 1972, and it took 135 days. The craft navigated within the Belt and conducted a flyby of Jupiter. However, a trip to the Kuiper Belt might take around a decade.

What are the Three Types of Asteroids?

Chondrites (C-type) are the most common type of asteroids and are made of silicate rocks and clay. They are dark-looking and are the oldest objects in the Solar System. 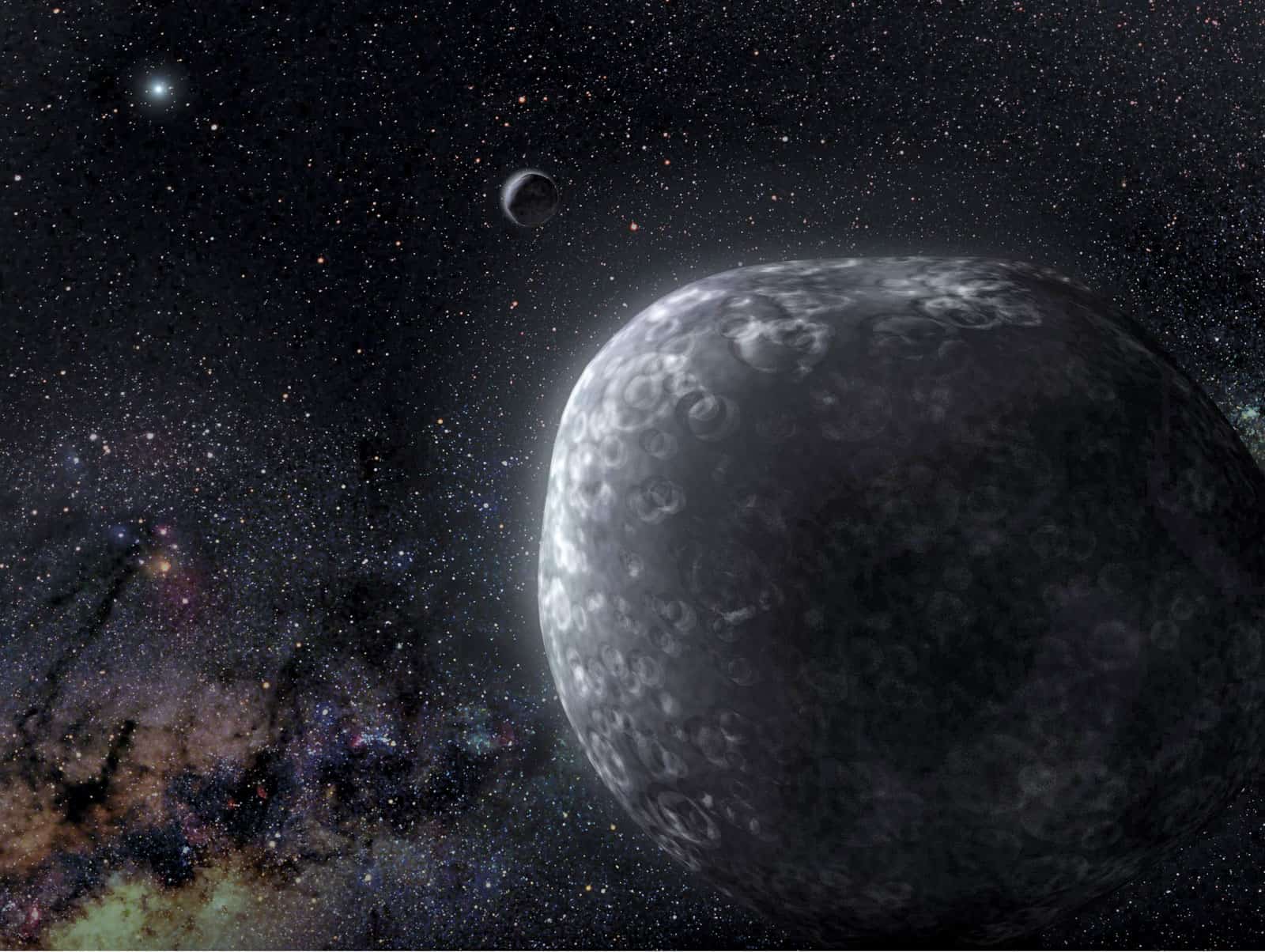 "Stonies" (S-types) asteroids consist of nickel-iron and silicate materials." Nickel-iron" (M-types) asteroids are metallic with iron sinking in the center and pushing lava to the surface. Read here more about asteroid types.

Is the Kuiper Belt Dangerous?

Sixty-five million years ago, a massive asteroid struck the Earth and killed nearly 90% of the animals (and dinosaurs). These impacts rarely occur, meaning the chance of Earth being hit by such a large object is approximately one in 5.000 in a human lifetime. If that happens, we could say it would cause a global disaster.

The Kuiper Belt isn't dangerous to us if we can go there, however, if a large object from there has a collision course set with us, we can consider the Kuiper Belt relatively dangerous.

Other Characteristics of The Kuiper Belt

The majority of the dwarf planets located in the Kuiper Belt have their own moon. It is believed that Haumea, one of the smaller dwarf planets, has its own ring system.

For some unknown reasons, a lot of the Kuiper Belt's mass is missing. It is believed that the Kuiper Belt should have 30 times the mass of Earth, but it doesn't.

- The origin of the Kuiper Belt hasn't yet been determined.

- There are many objects within the Belt, but the most well-known are the three dwarf planets: Pluto, Haumea, and Makemake.

- Gerard Kuiper published a scientific paper in 1951 in which he made believed that there are objects beyond Pluto.

- The biggest object within the Belt is the dwarf planet Pluto. Pluto is also the biggest dwarf planet, but not the most massive; that would be Eris.

- Astronomers found similar bodies like Kuiper Belt around other stars. They were observed through the Hubble Space Telescope. Discs around the stars HD 138664 in the Lupus constellation and around HD 53143 in the Carina constellation have been observed.